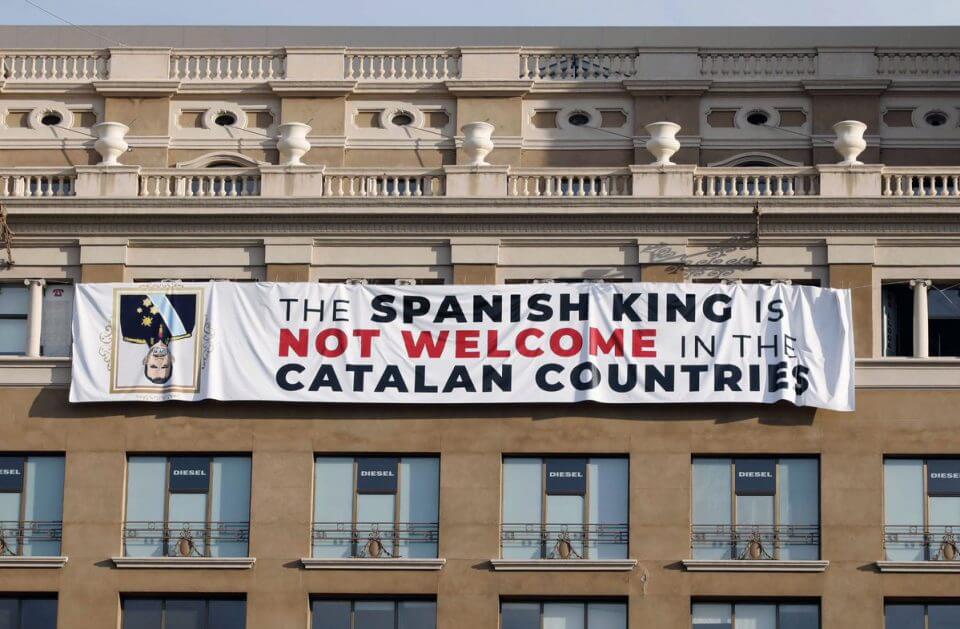 In the early hours of Friday 17 August, a year after the jihadist attacks in Barcelona and Cambrils that killed 16 people, giant banners appeared in Barcelona against the presence of the Spanish king, Felipe VI, scheduled to preside over a ceremony in memory of the victims.

Fourteen people died — including two young children aged three and seven — and over 100 were injured in the Barcelona van attack on the city’s most famous street, La Rambla, on 17 August 2017.

The king, his wife, Letizia, and Prime Minister Pedro Sánchez will join families of the victims in Barcelona for the commemoration at the Plaza Catalunya, near La Rambla.

Before the ceremony, which will not include speeches, flowers will be laid on a pavement mosaic in the centre of La Rambla designed by Barcelona-born artist Joan Miro. It is the spot where the van driven at high-speed down the popular boulevard by 22-year-old Younes Aboyaaqoub came to a stop.

There are further events planned to commemorate the victims today, but they have been organised in order to try to avoid becoming politicized and to ensure that Felipe VI is not booed or harassed.

However in the early hours of this morning, a huge banner stating in English that the ‘Spanish king is not welcome in the Catalan countries’ was displayed from a building overlooking the Plaza Catalunya.  It was accompanied by an upside-down portrait of the monarch. Catalonia’s main separatist civil society group, the Catalan National Assembly (ANC), on Twitter expressed ‘all its support to the activists who deployed this banner and spent the entire night defending freedom of expression’.

Another banner, draped from a building near the Joan Miro mosaic, also depicted Felipe VI shaking hands with a Saudi Arabian prince, stating ‘Their wars, our deaths. Catalonia in solidarity with the victims‘.

Supporters of independence for Catalonia from Spain are particularly hostile towards Felipe VI, especially after his televised speech on 3 October last year, following on from the 1 October referendum, and in which he avoided making any comment or apology for the Spanish National Police beating Catalan voters. At an event at the end of last August to protest against the terror attacks, both Felipe VI and then-Prime Minister Mariano Rajoy were the object of boos and whistles from demonstrators. Banners were also held in protest at Spain’s arms dealing with Saudi Arabia.