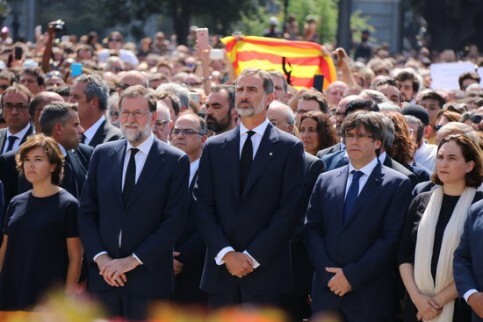 In the aftermath of the Barcelona terror attack last August, a demonstration called to illustrate the city’s determination to overcome fear and hatred turned controversial when the Spain’s King Felipe VI confirmed his attendance. One year later, his presence at the upcoming remembrance ceremony is on track to being just as divisive.

‘We did not invite him,’ Catalan president Quim Torra has remarked. With extremely poor approval ratings, the monarch is arguably one of the most unpopular figures in Catalonia, especially among pro-independence supporters.

The king’s response to last October’s referendum on independence, a televised speech on 3 October in which he made no mention of police violence against voters, made matters worse. Torra recently stated that Felipe VI was ‘no longer the king to Catalans’, and pledged to never attend any event organised by the crown, nor invite the king to any event held by the Catalan government.

The king’s attendance at the remembrance ceremony was announced last week. On Monday, Spain’s Prime Minister, Pedro Sánchez, defended the head of state from those who see him as a divisive figure, and stressed that he will be representing ‘the whole of Spanish society‘.

‘You can judge him for his public appearances,’ said Sánchez, who believes that the king ‘understands a plural Spain, the diversity of this country and has always built bridges towards Catalonia.’

Sánchez urged pro-independence parties to leave their animosity towards the king aside, as ‘everybody will unite against terrorism and in solidarity with the victims, and here there is no possible fissure’.

Last year, some 170 organisations presented a manifesto against the king’s presence due to his relationship with Saudi Arabia. In a parallel protest, they rallied against the ‘hypocrisy’ of seeing in the streets the same people ‘that have fostered islamophobia and hatred’, according to David Karvala, spokesperson for Unity Against Fascism and Racism.

The same organisations called people to wear blue t-shirts to show their disapproval of the king’s presence. Many followed their initiative and booed the king at his arrival.

In charge of the upcoming ceremony, Barcelona mayor Ada Colau stated that she will not allow for the event to turn political in any way. ;There won’t be any speech by politicians, just like many victims requested,’ she said, and added that the only protagonists will be ‘the victims and their families’.

Ciutadans (Citizens), the main opposition party at the Catalan parliament, said that the king’s attendance was ‘positive’ as he represented ‘millions of citizens who feel Catalans, Spanish and European’.

On August 17, a van attack in Barcelona’s La Rambla street left 15 people dead and more than a hundred injured, while another victim died in a subsequent attack with knives in the seaside town of Cambrils.

The so-called Islamic State claimed responsibility for the attacks. Members of the jihadist cell included several teenagers. The mastermind behind the terrorist group is thought to be Abdelbaki Es Satty, formerly the imam of the Catalan town of Ripoll.