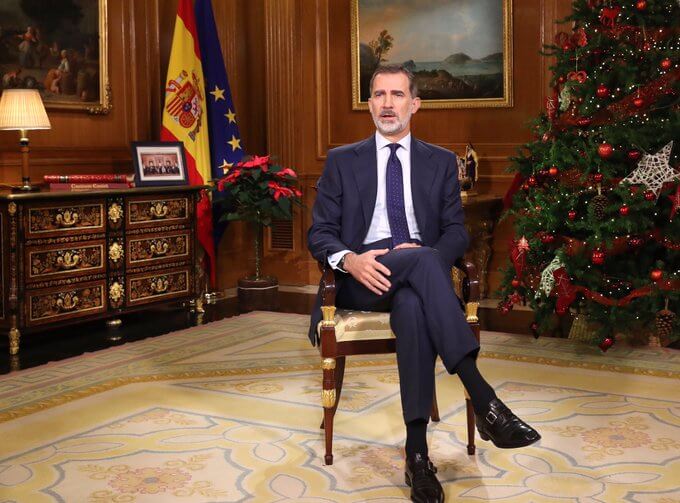 King Felipe VI included Catalonia as one of several ‘serious concerns’ for Spain during his sixth Christmas message, broadcast on the evening of Tuesday 24 December.

‘These are not easy times for the world,’ he said, referring to them as ‘full of uncertainty, of rapid and deep-reaching changes in many spheres, causing concern and alarm in society.’

He went on to specifically refer to ‘the new technology and digital era, the future of the European Union, the flow of migration, inequality between men and women in the workplace, and how we we deal with climate change and sustainability’.

Then he added ‘low employment – especially among our young people – and the economic difficulties of many families, especially the most vulnerable’ that continue to be the main worries in Spain. ‘While there is growth and development, the economic crisis has made inequality more extreme,’ he said.

Then he added that the ‘the loss of trust in institutions among many citizens, and of course Catalonia, are other serious concerns for Spain’.

Immediately afterwards, he went on to say that Spain is now on its way to vote in a new prime minister. Pedro Sánchez’s bid to stay in power is still subject to the support of the pro-independence Esquerra Republicana (ERC) party, however, and with whom his PSOE party is still holding talks.

Whilst Felipe VI made no more explicit mention to the Catalonia crisis, he did call for everyone to have ‘respect to the Constitution’ in order to ‘preserve’ the unity of Spain.

The monarch also expressed his ‘desire for harmony’ in the country and mentioned responsibility, affection, generosity, dialogue and ‘respect between people of very different ideologies’ as main contributors to reach the harmony between citizens.

Roughly two and a half months after the guilty verdict on the Catalan pro-independence leaders, Felipe VI also said that people in Spain ‘live in a Social and Democratic State of Law which enables us to live together in freedom and which has made Spain a modern country’.

‘Let’s believe in ourselves, in our society,’ he said. ‘Let’s believe in Spain and remain united in the democratic values we share to resolve our problems; without divisions or confrontations, which only erode our peaceful coexistence and impoverish our future.’

He ended his speech, fully in Spanish, by wishing a merry Christmas in Basque (Eguberri on), Catalan (Bon Nadal) and Galician (Boas festas).

On 25 December, Catalan president Quim Torra responded to the king’s speech, saying that ‘what’s a serious concern is the Spanish state today in Europe’. He went on to claim that Spain ‘violates human rights, fails to comply with the decisions of European courts, and denies Catalans their inalienable right to self-determination’.

Torra was speaking after heading a wreath-laying ceremony at the tomb of the former Catalan president Francesc Macià in Barcelona’s Montjuïc cemetery to mark the 86th anniversary of his death.

Click here for a full transcript of Felipe VI’s speech (in English).