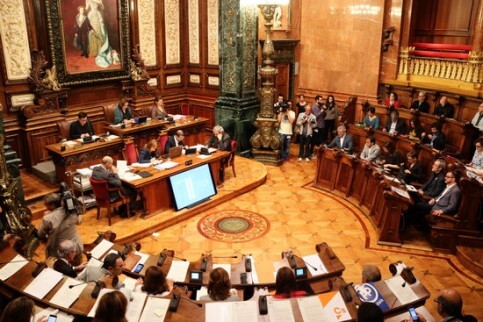 Barcelona City Council has passed a motion condemning the Spanish monarch, Felipe VI, and reasserting support for the abolition of ‘an outdated and anti-democratic institution like the monarchy.’

The symbolic vote came only a few hours after the Spanish government challenged in the Constitutional Court a similar resolution approved by a majority of MPs at the Catalan parliament two weeks ago.

The institutional declaration at Barcelona’s local council was proposed by far-left CUP and approved with the votes of pro-independence parties, ERC and PDeCAT, as well as the party of mayor Ada Colau.

Local councilors of unionist Ciutadans (Cs) party left the room when the motion was proposed. The Catalan Socialists (PSC) and People’s Party (PP) voted against it.

The Spanish monarchy is the most unpopular institution in Catalonia. In a recent poll, some 60% of the people surveyed gave the king a score of 0, with his average popularity standing at 1.82 out of 10.

Felipe VI has been widely criticised for his speech on 3 October 2017, in which he took on the Catalan government for organising a referendum on independence deemed illegal and made no mention of police violence against voters.