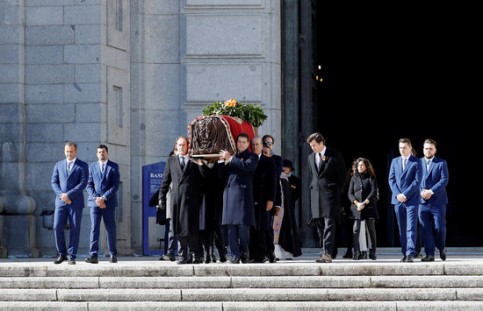 ‘Today, Spain is fulfilling its duty to itself,’ said acting Spanish prime minister, Pedro Sánchez, on Thursday, as the remains of the late dictator Francisco Franco were exhumed from the Valley of the Fallen memorial site and moved to a family tomb outside Madrid.

Sánchez went on to insist that ‘this decision marks an end to the moral insult that the public glorification of a dictator constitutes. We are taking another step towards the reconciliation that can only exist in the democracy and the freedom we all share.’

Yet, going by the reactions of other political and public figures to the removal of the remains of the dictator whose regime ruled Spain for 40 years following his victory over the Second Republic in the Spanish Civil War, few seem to see it in quite the same terms.

A much-heard reaction was that the exhumation, a couple of weeks before the 10 November general election, was an electoral stunt by Spain’s Socialist (PSOE) party to drum up votes, something Sánchez denied, insisting it had been done ‘as soon as was feasible’.

The head of the Podemos party, Pablo Iglesias, insisted that removing Franco’s ‘mummy’ was not enough, as ‘there’s still much to do. Francoism is encrusted in the oligarchies, in the sewers and economic powers who use the state to extend their privileges.’

‘The Socialists have had 44 years to exhume Franco,’ said the spokesman for the Basque PNV party, who criticised the fanfare and media coverage surrounding the exhumation, suggesting, ‘this act of reparation is turning into an act to exalt Francoism.’

It was a charge repeated by Alberto Garzón, coordinator of the IU leftwing coalition, who said ‘genocide doesn’t deserve this refined attention,’ and asking why government members ‘are attending what is clearly a homage to the dictator by the family and other fascists.’

Gabriel Rufián, MP for the pro-independence Esquerra Republicana (ERC) party in the Spanish Congress said the exhumation was a party campaign act that had become ‘an act of homage and exaltation’ of fascism, and called the Socialists’ electoral strategists either ‘negligent or irresponsible’.

Yet by far the most common reaction was that the exhumation was too little, too late, and that removing the dictator’s remains from a national memorial site meant to honour the Civil War dead did not go far enough in reversing the consequences of the Franco regime.

‘They may have removed the dictator’s remains from the Valley, but Francoism is very present in Spanish institutions,’ said MP in congress for the pro-independence Junts per Catalunya (JxCat) party, Laura Borràs, who said the proof is in the prison sentences given to Catalan leaders.

It was an opinion shared by Catalan president, Quim Torra, who welcomed the fact that the exhumation had ‘finally’ taken place, but criticised it for being done ‘late and badly’, adding that ‘what is even more important is to remove Francoism from the state.’

Former Catalan president, Carles Puigdemont, also commented on how long it had taken to carry out the exhumation, pointing out that ‘it has taken them 44 years to remove Franco,’ and he added: ‘Let’s see how long it takes them to remove Franco’s heirs.’

ALSO READ: Franco’s remains to be exhumed on Thursday

Nor did the exhumation please figures on the right, with the head of the People’s Party (PP), Pablo Casado, saying that the general election will ‘not be to vote about our past, but rather about our future, about real concerns and the Spain we want to leave to our children.’

The head of the Cuidadanos (Cs) party, Albert Rivera, was also critical, saying ‘if I was president I’d look for consensus before turning the Valley of the Fallen into a national cemetery,’ adding that the good news is that ‘Sánchez will stop talking about Franco.’

Meanwhile, the leader of the far-right Vox party, Santiago Abascal, said the real reason for the exhumation is to ‘delegitmize the Transition [to democracy], delegitimize the crown, topple King Felipe VI and bring down the cross in the Valley of the Fallen.’

One weekend, two opposite protests

This symbolic finger to the Franco legacy will not help to boost Socialist PSOE numbers significantly in the November general election. But it is a ritual that will not be forgotten and will energize Franco support on the right. The removal was clearly an act of homage. The Basque PNV spokesman is right when he said ‘this act of reparation is turning into an act to exalt Francoism’.