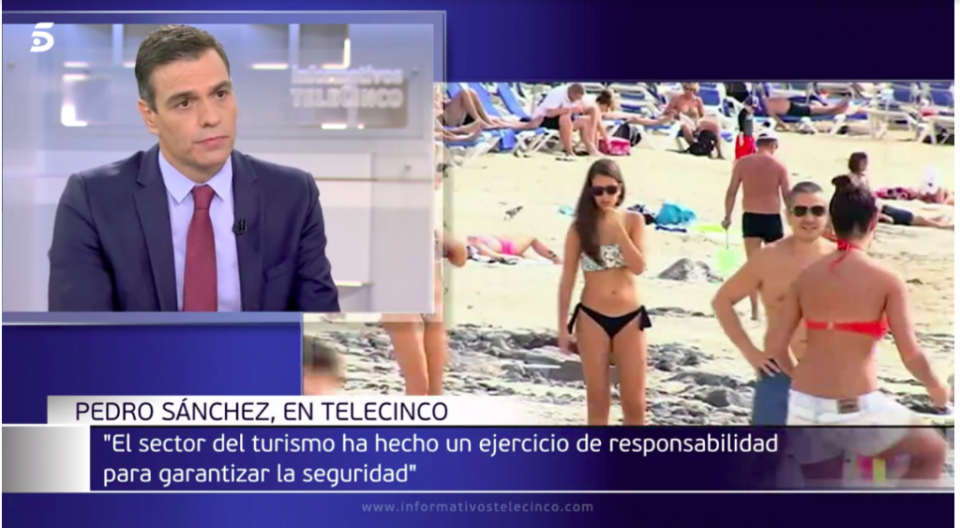 Spanish Prime Minister Pedro Sánchez has said that it is ‘safer’ to be in most regions of Spain than in the UK, with regards the risks of Coronavirus (Covid-19), and that the UK government had made a ‘mistake’ with its travel advice regarding Spain.

In an interview with Pedro Piqueras on Telecinco, Sánchez said that, ‘In most of Spain, the cumulative incidence of Covid-19 remains very low, below the European and UK average. We are working with the British authorities to find a solution and to have their decisions based on epidemiological criteria.’

During the interview, Sánchez said that ‘in epidemiological terms, it is even safer to be here [in some regions] than in the United Kingdom’.

His comments come after the UK government extended its recommendation on Monday against non-essential travel to all of Spain, including the Balearic Islands and Canary islands, and which is expected to provoke further cancellations and devastate the Spanish tourism industry.

Sánchez, PSOE leader of the Spanish government, said that, ‘The decisions that have been made by the United Kingdom are misaligned because some territories of our country have lower incidences than some European countries, including the UK.’

Defending the tourism sector in Spain, he said that he wanted to ‘convey a security message against the health emergency on the planet’.

In the interview, Sánchez stressed that in Spain the virus ‘is targeting two specific territories’, Aragón and Catalonia, and said that ‘in most [other territories] the incidence is still very low’, and that ‘in epidemiological terms it would even be safer to be here than in the United Kingdom’.

He called the UK decision ‘unfair’ and said: ‘Take the case, for example, of the Canary Islands, the Balearic Islands, the Valencian Community or Andalusia, which, I insist, have a lower incidence of the virus than is currently being registered in the United Kingdom.’

Sánchez insisted that Spain’s tourism sector ‘has exercised responsibility with regard to the health emergency’. He also confirmed that the UK government did not inform Spain of its decision to reimpose a quarantine before it made the announcement, and said his own government was continuing to negotiate the matter in order to lift the measures.

He again reiterated that ‘64% of cases [of Coronavirus] in Spain are concentrated in two territories’ and that he considered the UK decision as ‘a mistake’ when ‘contemplating the accumulated incidence of the country as a whole’.

According to a headline report in The Times newspaper in London on Tuesday, ‘All travel is now at risk’. The newspaper reported that a spokesman for Prime Minister Boris Johnson said, ‘Unfortunately no travel is risk-free during this pandemic and disruption is possible. So anyone travelling abroad should be aware that our travel advice is under constant review.’

The UK has rejected the Spanish prime minister’s claims and has said it will be keeping the latest quarantine rules in place.

Simon Clarke, a local government minister, told the BBC on Tuesday that, ‘We respectfully disagree with the Spanish government’s position on this’ – adding that there had been a 75% increase in reported cases in Spain at the end of last week.

‘We obviously continue to work closely with them and we wish them every success in managing this outbreak, but we’ve seen a very sharp increase in cases in Spain,’ he said.

He also said there were no plans to change the policy.

Germany advises against travelling to Catalonia, Aragón and Navarra

Does Sanchez not realise what he is saying? Safer to be in Spain than the UK yet he wants more Brits to come to Spain and so spike Covid 19 here. Witness the scenes in Britain at the weekend – crowds of young people outside pubs and on beaches with no masks and no social distancing. They have no regard whatsoever for rules and regulations. I don’t want them in Spain.