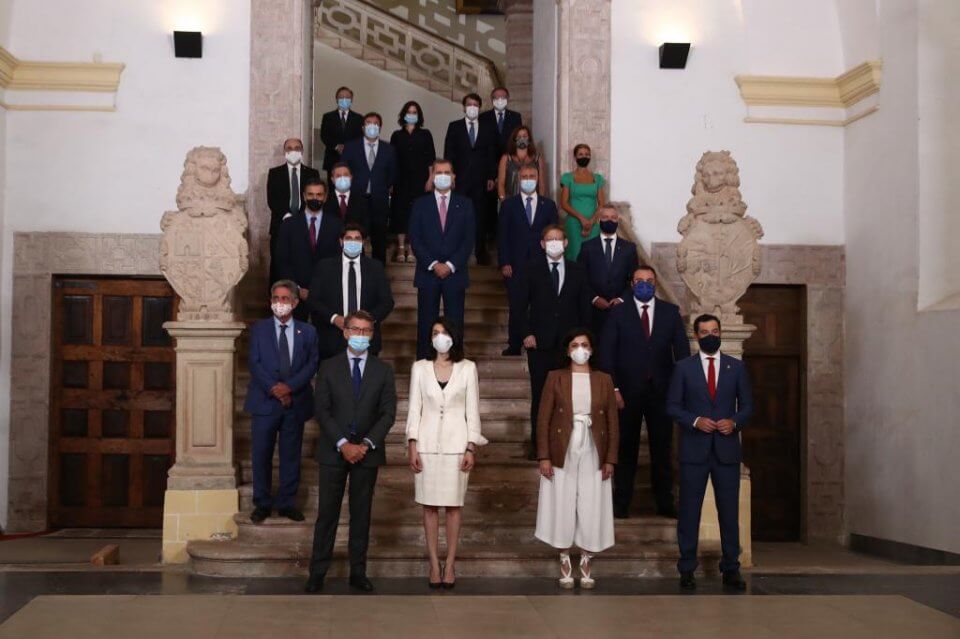 The 21st Conference of Regional Presidents of Spain was held in situ in the town of San Millán de la Cogolla (La Rioja) on Friday – with all presidents attending, with the exception of the Catalan president Quim Torra.

One of the reasons that Torra gave for not being present was to not contribute to ‘whitewashing’ the image of the Spanish Monarchy, as King Felipe VI also attended the conference.

Torra had also asked to participate in the meeting via video due to the current Coronavirus (Covid-19) situation in Catalonia, although the request was denied.

Spanish Prime Minister Pedro Sánchez had specifically sent letters to both Torra and the leader of the Basque government, Iñigo Urkullu, urging them to attend the conference held at the Yuso de San Millán monastery, stressing ‘the spirit of unity and commitment’ and stating their ‘attendance at this crucial meeting is very important’.

The purpose of the conference on Friday was to again address the Coronavirus situation in Spain, but also for Sánchez to explain the details of the recent European Recovery Fund that has been agreed.

The Catalan and Basque Country presidents have not attended the multilateral conferences in person for a number of years, mainly because they seek bilateral forums with the Spanish state, refusing to agree to equal treatment with the other Spanish autonomous communities.

After initially refusing to do so, Basque leader Urkullu finally did attend the conference on Friday – reportedly after a date was set for a meeting of a bilateral commission to discuss the Basque Country’s financial deal, and after Sánchez had outlined the terms.

Torra had replied by letter to Sánchez stating that, ‘Now is not the time for photo opportunities but to get down to work’. He also stated that ‘the relationship between my [Catalan] government and the government of Spain must be bilateral’.

The offer to hold the conference in San Millán de la Cogolla had come from the regional president of La Rioja, Concha Andreu, in recognition of ‘the emblematic role this enclave has played in European culture over the last thousand years’.

In 1997, the monasteries of San Millán de la Cogolla – Suso and Yuso – were classified by UNESCO as World Heritage Sites.

At the conference, Sánchez said that the objectives for Spain of the European Recovery Fund would be to support ‘a transformation of the Spanish economy by tackling the ecological and digital transition, gender equality and social and territorial cohesion’.

Speaking ahead of the meeting, he’d said that ‘the Conference of Regional Presidents provides good support to boost the economic recovery in the country as a whole’.

Sánchez stressed that, ‘Spain is a decentralised state in which the regional government authorities hold very important powers over health issues and economic development,’ and that, without them and the local council authorities, ‘We would be unable to mobilise all the economic resources we are going to need for our economy to recover’.

The Spanish prime minister also said that, ‘No autonomous region in Spain can stand above or below any other, and that all of them must have the same opportunities’.

Sánchez also said that, although difficult months lie ahead in continuing to deal with the pandemic, ‘Spain, its institutions, the healthcare professionals in all autonomous regions and the government of Spain are much better prepared than we were back in March’.

Background to the ‘Conference of Regional Presidents’

The Conference of Regional Presidents was established as a political and institutional initiative for ‘multilateral cooperation’ between the Spanish State and its 17 regional governments – as well as the autonomous cities of Ceuta and Melilla.

The aim of the conference is to ‘debate and adopt agreements on matters of special interest for the regional system’ of Spain. Since its creation, the Conference of Regional Presidents has held six in situ meetings, the last one on 17 January 2017. During the Coronavirus crisis, Pedro Sánchez held 14 conferences with the regional presidents, but all of them were by video.

The first few meetings of the Conference of Regional Presidents were held somewhat irregularly.

During the first government of José Luis Rodríguez Zapatero three meetings were held (in October 2004, September 2005 and January 2007) and during his second government there was another one was held in December 2009. Mariano Rajoy held only one conference in his first term of office (October 2012) and another in his second term (January 2017).

The regional presidents of Spain are: