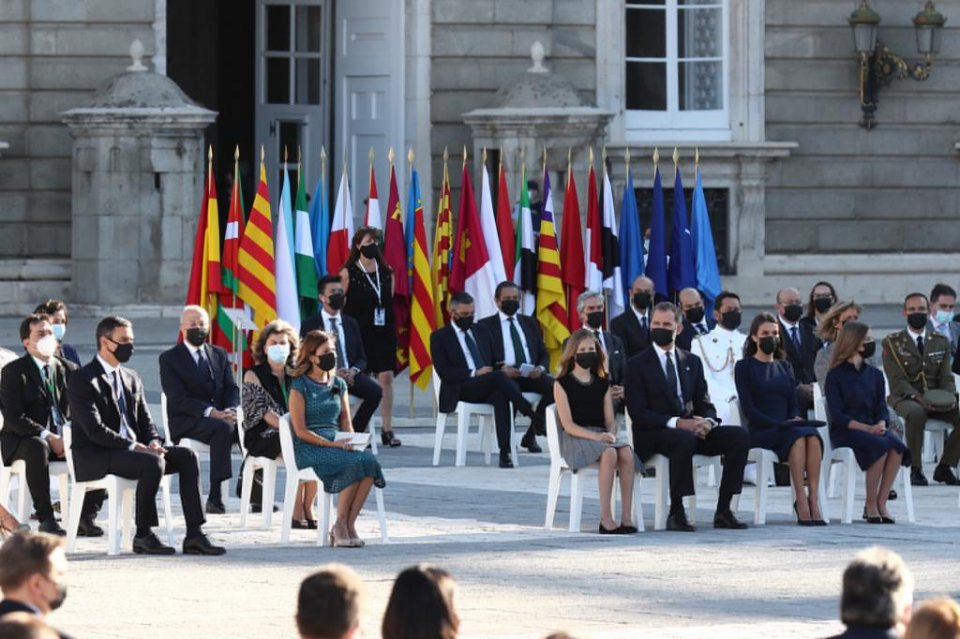 Spain paid tribute to over 28,400 victims of Coronavirus (Covid-19) on Thursday, at a state ceremony in Madrid attended by various EU and World Health Organization (WHO) dignitaries, and presided over by King Felipe VI.

The ceremony was held in the Plaza de la Armería – the main forecourt of Madrid’s Royal Palace – and also paid tribute to all health workers, emergency and essential services personnel who have been working on the frontline in Spain during the pandemic.

Just over three weeks since the end of the state of alarm and the start of the country’s New Normality, however, Spain has also seen a recent surge of Covid-19 infections – with health officials currently monitoring more than 120 active outbreaks.

Many of the country’s regional governments have reinstated restrictions, including the compulsory wearing of face masks in public at all times, even where social distancing can still be maintained.

Over 400 people attended the ceremony on Thursday in Madrid, including all members of the Spanish government and all leaders of Spain’s 17 regional governments. Family members and relatives of victims also attended, as well as representatives of frontline workers.

The leaders or key representatives of all Spain’s political opposition parties also attended the ceremony, with the exception of the far-right Vox party. The party stated that it could not attend ‘what it considers an exculpatory ceremony of a Government that hides half of the dead.’

WHO chief Tedros Adhanom Ghebreyesus attended out of respect for ‘the great number of people who lost their lives to Covid-19 in Spain and the world’, and to stress the UN health body’s support for those fighting the virus.

‘It has been very, very difficult,’ said Felipe VI in his address to conclude the ceremony. ‘Many people were alone, many others suffering from the disease … [but] in these months, our society has provided a lesson of immense courage. Spain has shown its best spirit.’

‘With the passing of time,’ said the king, ‘we will remember that we were an example of civic responsibility, maturity, resistance and commitment to others.’

Felipe also expressed his ‘immense gratitude’ to all those who have ‘sustained the pulse’ under very difficult circumstances, emphasising the health workers, the security forces and workers in essential services. ‘It is time to feel proud of the responsibility shown by the whole of the Spanish people during this hard and difficult period.’

Following his address, Felipe laid a wreath alongside a cauldron of flames in the Plaza de la Armería of the Royal Palace.