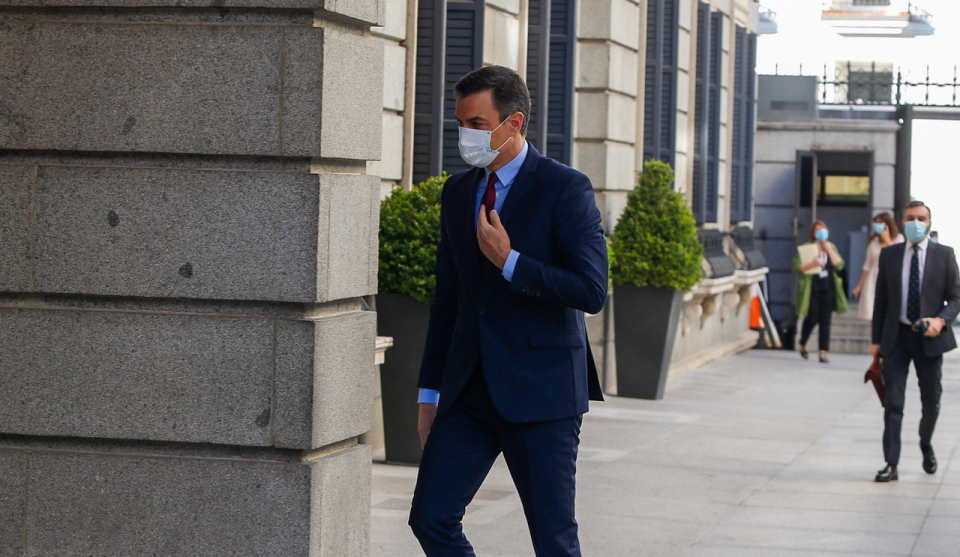 Also read: Details of curfews & restrictions for all regions during new ‘State of Alarm’

The wearing of face masks will remain compulsory in Spain until a CoronavLatest: Coronavirus in Spain figures (9 Dec)irus (Covid-19) vaccine is found, with police having the power to fine citizens for not wearing them, the government announced on Tuesday.

It forms part of the measures within a new royal decree approved by the cabinet to establish the measures that will govern the ‘new normality’ after the ‘state of alarm’ and lockdown officially ends. The measures have been drawn up by Spain’s Ministry of Health and the Ministry of Transport.

Spanish Health Minister Salvador Illa said that the measure regarding the wearing of face masks would continue after the country’s ‘state of alarm’ concludes on 21 June – and that it would ‘remain in place until we permanently defeat the virus, which is when we have an effective treatment or vaccine against it’.

Wearing face masks in Spain has been compulsory since  21 May for everyone aged over six in closed spaces (including shops and stores), as well as on the street and in public places, if a 2-metre ‘social distance’ cannot be maintained. It had initially been made compulsory to wear face masks on all public transport in Spain since Monday 4 May.

During the ‘new normality’, wearing face masks will also remain in force on public transport, as well as for passengers in private vehicles unless they live in the same household as the driver.

Although not compulsory for very young children, it is still ‘recommended’ for those aged between three and five.

When the ‘state of alarm’ ends and the final phase of the government’s four-phase plan of relaxing the lockdown restrictions also ends, the rule of wearing face masks will remain in place – with a fine of up to 100 euros for non-compliance — although the security distance will be reduced to 1.5 metres.

Illa said that the new regulations will come into force around 10 days before the country reopens its borders to international tourists from 1 July.

50% of Spain has now moved to Phase Three in the government’s four-phase de-escalation of lockdown plan.

We’ve published all the key rules and measures regarding the four phases in a separate report, together with the current ‘phase status’ for each region and province. The fully updated report can be found here: Lifting of lockdown in Spain – full details of all phases for all regions.

ALSO READ: Face masks compulsory in closed spaces and outside, if not at 2-metre distance

Illa also announced on Tuesday that, ‘if the state of alarm is lifted as expected, there will be unrestricted freedom of movement within the country.’

The royal decree also plans for new safety measures at workplaces and education centres, such as reorganising work stations or ensuring staff rotations to avoid overcrowding.

Special measures will also apply to the hospitality industry and restaurants, and cultural and sports facilities. Furthermore, sufficient public transport will be offered to avoid crowds.

The decree also requires the regional health authorities across Spain to be adequately staffed with specialists in epidemic ‘prevention and control’ to quickly respond to any new outbreaks.

Regional health services will have to guarantee that, at all levels of care, and especially in primary care, a suspected diagnostic test will be performed by PCR or another molecular diagnostic technique, as soon as possible.

Also, to ensure being able to trace any new cases, airlines and transport companies will have to retain details of all passengers for ‘at least four weeks’ after they have travelled.

So far the Spanish coalition (PSOE–Podemos) government has reached an agreement from the Ciudadanos (Cs) party to support the decree.

Wow, absolutely amazing. Masks until a vaccine? These people are completely crazy.
The virus barely kills anyone unless old or unhealthy, 80% people have no symptoms or are immune.
This is the world’s biggest joke.
Spain, shame on you for falling for the lies of the WHO and Bill Gates.
You are holding the population to ransom.

Yes!!!!!! Exactly Rachel. Shame on everyone for falling for the lies.

Spain like most governments is being guided by an irrational fear and a mob mentality stirred up by the drama loving media. This happens all the time and it’s fine, as long as it doesn’t impact on regular people’s freedoms. Requiring people to wear a mask when there’s absolutely no need to is a dangerous step into authoritarianism.

These are dark times indeed – and it’s not because of the virus.

Talking nonsense Rachel. This is a deadly virus that has killed a lot of people. Many others have been left scarred for life. Spanish government did well pulling things back from the brink. Not a joke – listen to experts who dedicate their lives to helping others.

Totally correct, Jim. The UK Government moved more slowly than the Spanish Government. In Spain, the response could have been better, but our friends in Spain have hardly been touched by the damn thing, Meanwhile, in the UK, 8 of our close friends and family members got coronavirus. One died, and another, a healthy woman of 45, is still sick with what they now call “long tail coronavirus.” Well done Sanchez.

Your friends in Spain have “hardly been touched” ? This is fantastic that you can confirm that the “worst cases” actually didn’t happen where they reported they did!!! And so confirming Rachels comment that people are believing in something that is basically lies and holding the population ransom. ..

Jim I assume you get a flu shot every year and Wear your mask… so don’t you worry!! You’re safe as can be …

I am Honestly shocked at the unquestioning belief that the people have. …(apart from when it’s actually factual.. and then of course it becomes a conspiracy.)

Had the lock down started once we had surpassed flu season numbers – which by the way happens yearly but without comment or media input – had we maybe entered a zombie apocalypse or flesh eating virus situation. .. maybe we could all then agree that this situation was justified… but none of that happened.. low figures (even with he made up ones added in) and yet everyone has willingly complied?
Honestly I’m more worried about that virus. . The compliance -19 where we all willing accept what we’re told regardless of real facts.. regardless of actual data… regardless of the contradictory information .. the mixed messages… I’m more scared of living in a world of idiots!! They make a mask or vaccine to protect against that??

I really despair at all the people who think the wearing of face masks is not for them and why should they comply. If they had taken the trouble to read things in details instead of only what they want to know then they would understand that the face mask whilst offering imited protection for the wearer, does in fact offer much more for others nearby. The reason for this is to try and stop the spread from one to another not mainly to protect the user.
Its those selfish people who do not wear a mask that accelrates the spread.
I am 82 , have serious lung infections which are terminal, therefore do not have to wear a mask, I do , although it makes breathing difficult, out of respect for other people. Now how would you all feel you parents or grandparents were to be infected just because some like you does not wear a mask?