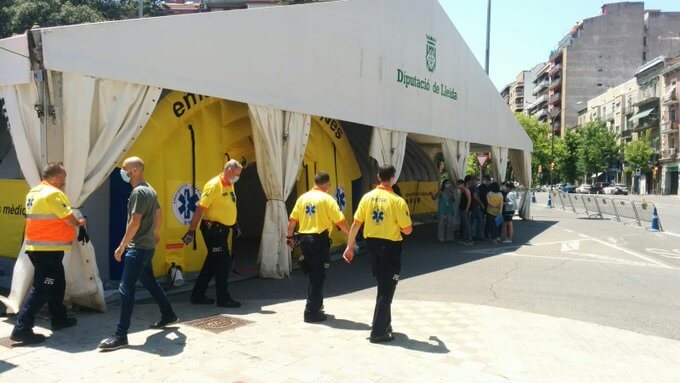 The Catalan government’s decree to impose tighter lockdown restrictions in the city of Lleida and seven surrounding municipalities after a rise in Coronavirus (Covid-19) infections is now up in the air after a local court ruled against the home confinement order on Monday morning.

The regional court in Lleida accused Catalan authorities of overstepping their powers and stated that only the Spanish government can issue a stay-at-home order by triggering a ‘state of alarm’ like it did on 13 March.

‘What is proposed today goes far beyond a simple limitation of movement and seriously affects constitutionally recognised rights,’ Judge Elena Garcia-Munoz Alarcos said in the ruling.

According to the judge, the Catalan government’s decree identified 11 outbreaks of Coronavirus at companies in the area, but two were in towns that had not received home confinement orders. The judge argued that home confinement is not justified as the exact location of other outbreaks is not stated.

President of the Catalonia, Quim Torra, has said he cannot accept the ruling.

‘We cannot understand that there is bureaucratic obstacles in decisions that are taken for the health and life of citizens,’ Torra said. ‘It’s a luxury to lose time with legal resolutions. We cannot allow this.’

Torra asked for people in the areas of Lleida to stay at home, and that his government would adopt a new decree to try and solve any legal issues regarding the confinement order.

Over the past weeks, the Catalan government has ordered a series of measures to combat the spread of Covid-19 infections, such as the compulsory use of face masks and the previous partial lockdown of Lleida and the Segrià county from last Saturday 4 July.

A week after limiting freedom of movement between the Segrià county and the rest of Catalonia, the government announced the next step of issuing home confinement measures on Sunday (see earlier report below).

Some people in Lleida took to the streets to protest, demanding that the president of Catalonia, Quim Torra, and the mayor of the city, Miquel Pueyo, to step down.

The Spanish government has currently ruled out implementing a new ‘state of alarm’ in order to control the new outbreak in Lleida.

With the end of the state of alarm on 21 June and the start of the ‘New Normality’, all regional powers that had been centralised were reinstated. Each of Spain’s regional governments now has to monitor and control the epidemiological situation in their area.

Report below updated at 19h on Sunday 12 July

The Catalan government has now ordered home confinement from Monday 13 July for residents in the city of Lleida and seven other municipalities in the Segrià county, west of Catalonia.

The new measures will last 15 days and affect around 150,000 residents.

Alba Vergés, head of the Catalan health department, announced on Sunday that people ‘must stay home except to go to work [if unable to work from home]. Meetings of more than ten people, including weddings and funeral services, are prohibited.’

The opening of cultural venues, gyms and nightlife has also been suspended. Residents will only be allowed to leave home in order to go to work, visit the doctor, or to do sports with people they live with. Bars and restaurants will close – but summer camps for children will continue.

The Catalan government tweeted: ‘The PROCICAT (Civil Protection) has approved that from 13 July, all departure and entry is prohibited in: Lleida, Alcarràs, Soses, Seròs, Aitona, La Granja d’Escarp, Massalcoreig and Torres de Segre, Sucs and Raimat, except for mobility for work and essential services.’

‘The measure affects public transport in all its forms,’ it added. ‘This restriction does not affect traffic on motorways and expressways when it comes to mobility with origin and destination outside the county of Segrià.’

The comarca (county) of Segrià in Lleida had lockdown restrictions imposed upon it from last Saturday 4 July, following an increase in the number of new Coronavirus (Covid-19) infections registered there.

Segrià encompasses a total of 38 municipalities, including the city of Lleida itself, and the initial lockdown was expected to affect over 209,000 people.

With the initial lockdown restrictions for the area, residents of Segrià were not confined to home, although gatherings of more than 10 people were prohibited and visits to retirement homes were also stopped. You can read our report from last Saturday here: Area of Segrià in Lleida (Catalonia) in lockdown.