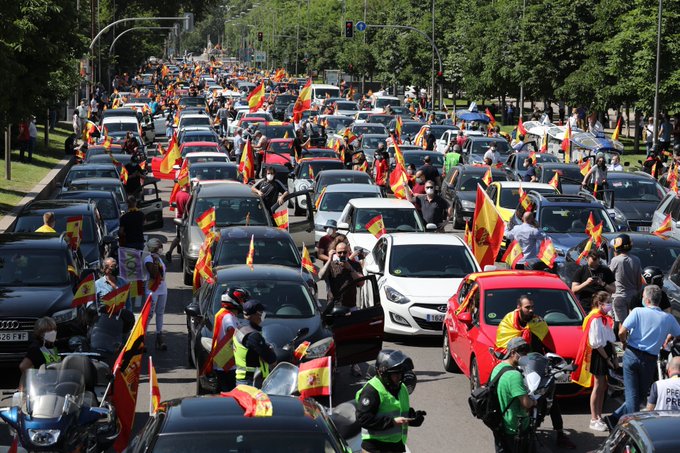 Thousands of cars and motorbikes with horns blaring and passengers waving Spanish flags, drove in procession through Madrid and other cities of Spain on Saturday, in a protest organised by the far-right Vox party led by Santiago Abascal.

The Vox party is Spain’s third largest party, with 52 seats in the 350-seat parliament, after the general election of 10 November 2019.

The protest was against the Spanish government’s handling of the Coronavirus (Covid-19) pandemic, as well as the prolonged ‘state of alarm’ in the country, recently extended for a fifth time until 7 June.

Protestors called for Prime Minister Pedro Sánchez, leader of the PSOE socialist party, as well as his coalition government partner, the second deputy PM Pablo Iglesias of the left-wing Podemos group, to resign over their handling of the Coronavirus crisis, as well as the lockdown, the ‘state of alarm’ and the damage done to the economy and jobs.

Vox leader Abascal made a speech that was broadcast on EsRadio during the protest, so that people could listen to it in their cars. He claimed the Spanish government was ‘directly responsible for the worst management of this crisis on the entire planet.’

Protests from citizens against the ‘state of alarm’ had started around 10 days ago, but had been initially centred in the affluent Barrio de Salamanca of Madrid. Groups of protestors had been taking mainly to the street of Núñez de Balboa at around 9pm each evening, banging pots and pans. The protests then spread to other neighbourhoods of Madrid, and also took place in Málaga.

Some observers, however – whilst also pointing out that some of the protestors in the Barrio de Salamanca area had been seen holding golf clubs– had suggested that the original protests were more to do with the fact that wealthier Madrileños had been prevented from travelling to their second residences across Spain, as the Madrid region remained in Phase Zero of the government’s de-escalation of lockdown plan.

The Madrid regional government, controlled by the right-wing People’s Party (PP) in coalition with the centre-right Ciudadanos (Cs) – and also with support from the far-right Vox party – has since filed an appeal with Spain’s Supreme Court to investigate why the Health Ministry twice denied Madrid’s request to move to Phase One.

The vehicle protests on Saturday took place in other cities across Spain, not only in Madrid. According to figures from the central government’s delegation in Madrid, around 6,000 cars participated in the protest in the Spanish capital. According to the local police in Barcelona, the Guardia Urbana, around 500 cars participated in the Catalan capital. In Seville, it was reported that 6,000 vehicles participated. The far-right Vox party posted the video below on YouTube of the protest also taking place in other regions.

Later in the day, prime minister Pedro Sánchez gave another televised address – in the same way that he has been doing on previous Saturdays during the lockdown. He announced that the country would be ready to welcome international tourists from July onwards, and that football matches in La Liga could also kick off again from 8 June.

Sánchez also said that from Tuesday – with all areas of the country out of Phase Zero – there would be a formal period of mourning for the victims of Coronavirus, lasting 10 days, and that flags would fly at half mast. He said there would be an official ceremony, presided by King Felipe VI.

Coronavirus in Spain figures (24 May)