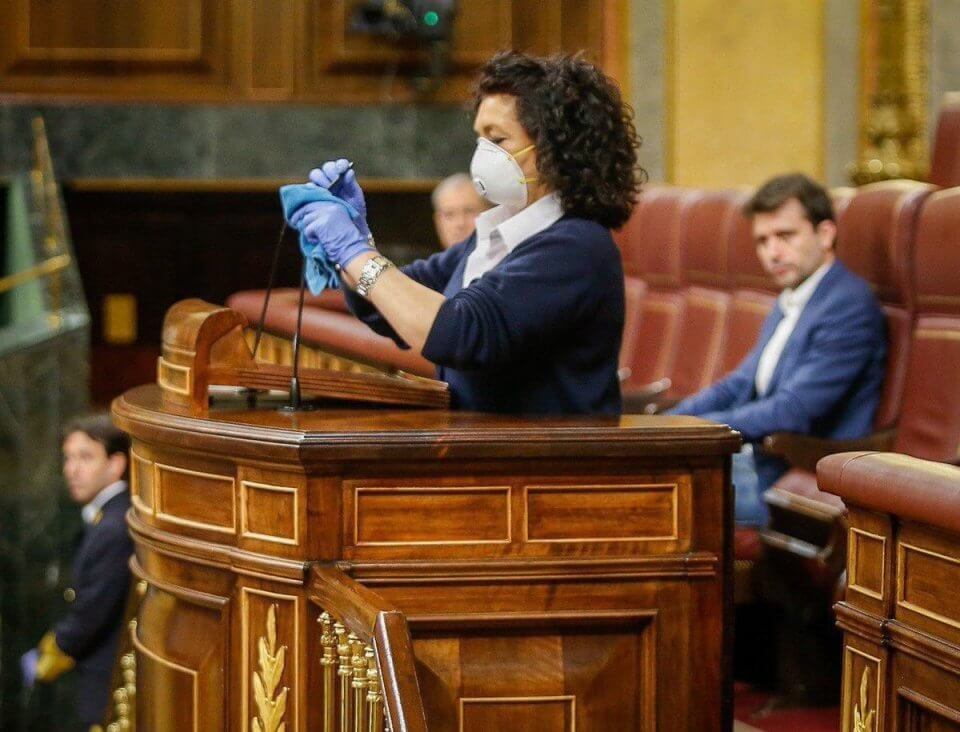 Official figures released by the Spanish Health Ministry at 11.30am on Wednesday 18 March now confirm 13,716 known cases of Coronavirus (Covid-19) in Spain, which is 2,538 more than yesterday (an 18% increase in 24 hours). 598 people are now also known to have died from the pandemic in Spain and 5,717 people remain in hospital, with 774 in intensive care. 1,081 people have made a full recovery.

Of the official figures announced by Fernando Simón, the director of the Health Ministry’s Coordination Centre for Health Alerts, 5,637 confirmed cases are known to be in the Madrid region alone. There are now 1,866 cases in Catalonia, 973 in the Basque Country, 859 in Andalusia, 675 in Castilla La Mancha, 726 in Valencia and 419 in La Rioja (northern Spain).

The Coronavirus outbreak, which first emerged in China late last year, has spread rapidly across the globe, infecting nearly 200,000 people and killing 7,900 as governments scramble to contain it. The European Union has shut its borders to travellers from outside for 30 days in an attempt stem the spread of the pandemic.

Spain closed its land borders with France and Portugal on Tuesday to all those without Spanish nationality or residence status, and further measures are expected in the coming days at airports and ports.

The World Health Organisation (WHO) has urged the ‘boldest actions’ on the continent, the pandemic’s latest epicentre.

US President Donald Trump, who for weeks has been accused of playing down the crisis, appeared determined to now take control of the situation, declaring he would do everything to fight an ‘invisible enemy’. ‘We have to win this war,’ he said at the White House on Tuesday.

In France, President Emmanuel Macron also likened the outbreak to war and ordered almost the entire population to stay at home for at least two weeks. The UK stepped up its own measures following scientific advice that infections and deaths would spiral without drastic action. Citizens were told to avoid all non-essential overseas travel and large social gatherings, with more stringent restrictions expected in the coming days.

Spanish Prime Minister Pedro Sánchez appeared in front of a near-empty Spanish Congress on Wednesday morning, to give an update on the measures being taken by his government to combat the outbreak of Coronavirus, with Spain having been in a lockdown since Sunday.

The Spanish government has announced a package of €200bn to counteract the social, health, labour and economic impact of Coronavirus, yet Sánchez also warned of ‘very tough days’ ahead. In the Congress on Wednesday morning, he said that Spain is ‘still days’ from reaching the peak of the pandemic.

The €200bn comes on top of the €14bn announced last week, and represents nearly 20% of Spain’s GDP. €117bn will come from the public purse and the remainder is private money. Sánchez described the ‘colossal’ package as the largest allocation of funds in Spanish history.

‘We are living through a situation without precedent in the collective memory of Spaniards and the majority of Europeans,’ he said. ‘A global challenge and all countries, some earlier and some later than others, are taking steps along a path of shadows lined with plenty of uncertainties.’

Further measures being taken by Spain include imposing a freeze on the collection of mortgage payments by banks for unemployed workers affected by the economic and health emergency of Coronavirus. The measure will also include the prohibition of cutting basic supplies (water, electricity and gas) to vulnerable groups.

In the Spanish Congress on Wednesday morning, Pablo Echenique of the Podemos group – the partner of Pedro Sánchez’s Socialist Party (PSOE) in a coalition government – said that the government should extend the mortgage support measures to families who are renting their accommodation.

Spain has also announced more flexibility in implementing temporary redundancy schemes, or ‘Temporary Employment Regulation Files’ (ERTE), in order to avoid permanent job losses. Those temporarily out of work will have the right to unemployment benefits, and any time on benefits won’t count against a person’s entitlement to claim benefits in the future.

‘Up to €100bn credit will be made available,’ said Pedro Sánchez, ‘and more resources will be spent on research to find a vaccine for coronavirus.’

Already some 100,000 people are estimated to have been made temporarily redundant in Spain since the outbreak of Coronavirus, especially in sectors such as retail, manufacturing and hospitality.