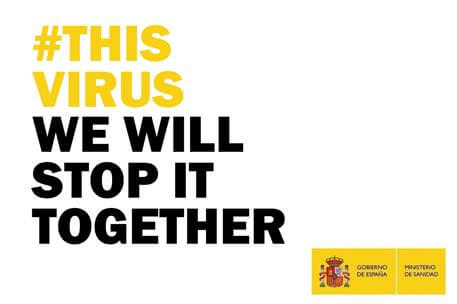 As the Coronavirus (Covid-19) pandemic continued to spread across the globe on Monday, Spain experienced its first working day in the ‘state of alarm’ lockdown, imposed by the Spanish government during the weekend.

Official figures released by the Health Ministry at 1pm on Monday for Coronavirus in Spain confirmed 9,191 known cases. 309 people are now also known to have died from the pandemic.

Governments are scrambling to contain not only the spread of Coronavirus but also the economic fallout, with fears that it will catapult the world into recession.

The EU is to hold a summit on Tuesday, set to discuss the 27-nation bloc’s response to the virus, including a proposal to close all borders to non-essential travel.

Spain’s Interior Minister Fernando Grande-Marlaska announced on Monday that Spain would effectively be closing its land borders with France and Portugal by imposing tighter restrictions – and further restrictions have not yet been ruled out on air traffic or maritime transport.

With stricter border controls in place from midnight tonight, only Spanish nationals, Spanish residents returning to their homes in Spain, ‘cross-border’ workers or those with special authorisation will be allowed to enter Spain from France or Portugal. Valid documentation will be required to be shown.

In preparation for the country’s lockdown, on Sunday evening a press conference was held by Spain’s four ‘Coronavirus Ministers’ – those who have the key responsibilities for the measures adopted under Spain’s ‘state of alarm’ – led by Fernando Grande-Marlaska, as the Interior Ministry is coordinating the lockdown.

Spanish Health Minister Salvador Illa announced that all private health facilities and resources have been placed in the hands of regional health councillors in their respective regions. All the contracts of resident doctors in the final years of training and in specialised fields related with the situation caused by Coronavirus, will be extended in order to ensure greater availability of healthcare professionals.

Illa also issued a period of 48 hours for all companies and individuals that have stocks of products necessary to protect health, such as face masks, to communicate their location – and that any companies that have the resources to manufacture such products to also communicate with the Health Ministry.

Spanish Transport Minister José Luis Ábalos called for citizens to only travel when unavoidable with the goal of minimising the risk of contagion. All public transport services in Spain by road, train, plane and ship have been reduced by 50%. Passenger transport service operators are also obliged to clean all vehicles daily, following the recommendations established by the Ministry of Health.

Defence Minister Margarita Robles explained that there would be an initial deployment of Emergency Military Units (UME) in Madrid, Valencia, Seville, Zaragoza, Leon, Las Palmas and Santa Cruz de Tenerife to perform actions necessary to help transport, citizens, goods and surveillance services, if necessary, and also assist with the cleaning and disinfecting of public areas.

All of the resources of military hospitals have been placed at the disposal of the Ministry of Health and instructions have been given to the military pharmacy to increase the preparation of alcohol-based hand disinfectants. All reserve military doctors have also been called up.

It was also announced that the armed forces would collaborate with Spain’s National Police and the Guardia Civil – and that together with the Spain’s Ministry of Social Affairs, the army would help to distribute food to help the homeless.

Catalan President Quim Torra tested positive for Coronavirus on Monday. Whilst Torra, together with all other presidents of Spain’s autonomous regions and provinces, have given their support to Spanish Prime Minister Pedro Sánchez’s ‘state of alarm’ measures, the Catalan government has also stated that the measures are ‘insufficient and ineffective’.

Torra said that ‘the state of emergency could have provided the Catalan government and others with tools to fight Coronavirus. Instead, it’s been put at the service of an outdated idea of what Spain is and a set of measures that are insufficient and ineffective’.

He also said the Spanish government’s response has been ‘insufficient’ because ‘we’ve moved from the containment to the mitigation stage [and must therefore] be more courageous and take more drastic action if we want to curb the exponential spread of the virus’. Torra stressed that ‘Catalonia, Spain as a whole, and the countries around us need home confinement to fight the coronavirus’ and said it was essential to shut down airports, ports and high-speed train lines.

In order to enhance the idea of ‘unity’ and shared responsibility, the Spanish government also launched an advertising campaign on Sunday, reinforcing the idea that it is ‘the people of the country, individually and collectively’, who are ‘the main drivers of national hope in fighting the virus’.

The ‘united’ measure was criticised by Catalan and Basque nationalists, with many accusing Spain’s central government of turning the Coronavirus campaign into a political message.

Meanwhile, in Benidorm in the south of Spain, some British tourists have been reportedly fined up to 700 euros by local police for not complying with the Coronavirus lockdown, and several bars and clubs that should remain closed have been reported to the local courts. Fines for establishments could range from 1,500 to 30,000 euros.

Following the advice of the UK’s Foreign Office against travel to Spain, and with many tourists currently in Spain now experiencing their vacations without bars, restaurants and other activities, Coronavirus has also had an impact on their ability to return quickly to their own countries.

IAG, the owner of British Airways and Spanish carrier Iberia, announced it would slash flight capacity by 75% during April and May owing to the COVID-19 outbreak. Easyjet and Ryanair are expected to cut back on all flights to and from Spain and other EU destinations within the next days.

Easyjet CEO Johan Lundgren said: ‘European aviation faces a precarious future and it is clear that coordinated government backing will be required to ensure the industry survives and is able to continue to operate when the crisis is over.’ Ryanair has not ruled out a full grounding as it unveiled stinging flight cutbacks.

In other business, Spanish car manufacturer SEAT announced on Monday that it is planning a temporary statutory lay-off of 14,800 workers from its Martorell (Catalonia) plant. ‘The company has presented today a Temporary Employment Regulation File (ERTE) due to force majeure … due to the logistical and productive difficulties caused by Covid-19,’ a statement read.

Meanwhile, Burger King in Spain is also planning to lay off 14,000 staff, its entire workforce, and suspending its operations in the country.