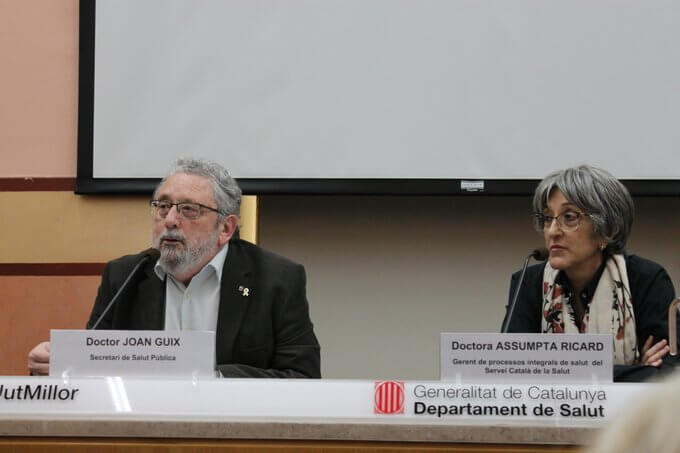 After hundreds of tourists were confined to a Tenerife hotel in the Canary Islands on Tuesday, following an Italian man hospitalised with a suspected case of Coronavirus – the first confirmed diagnosis on the mainland Iberian Peninsula was then also confirmed in Catalonia.

A 36-year-old Italian woman who is a resident in Barcelona had travelled to the Bergamo and Milan area of northern Italy between 12-22 February, before testing positive in the Catalan capital on Tuesday.

It follows northern Italy seeing a major outbreak of the virus over the weekend, with thousands of citizens now in lockdown across 11 towns in the regions of Lombardy and Veneto.

Coronavirus has now killed more than 2,600 people and infected over 77,000 others in China. In the rest of the world, there have been more than 40 deaths and 2,700 cases.

The disruption caused by the epidemic has also grown, with global stock markets tumbling, restrictions imposed on travellers and many top sporting events cancelled.

The World Health Organisation (WHO), the UN’s health agency, has called for countries to ‘prepare for a potential pandemic’ – a term used to describe an epidemic that can spread easily throughout the world.

In Tenerife on Tuesday, hundreds of clients at the four-star H10 Costa Adeje hotel were being monitored for health reasons, Spanish government spokeswoman Maria Jesus Montero told a news conference. ‘Depending on the results of the test, appropriate measures will be taken,’ she said.

It followed a tourist – a doctor from northern Italy’s Lombardy region – together with his wife, being hospitalised, reportedly from the virus.

The travel groups Tui and Jet2holidays both use the H10 Costa Adeje hotel for package holidays, with Tui having around 200 guests there.

The scare came as hotels across the Canary Islands were packed with guests who had flown in for the traditional February carnival festivities.

Spain is the second-most visited country in the world after France and tourism is crucial for the domestic economy, accounting for around 12% of its gross domestic product.

Later on Tuesday, the first case of Coronavirus was confirmed on mainland Spain – in Barcelona. It also follows weeks of speculation as to whether the epidemic would spread to the area, as well as the cancellation of the Mobile World Congress for fears about the virus.

The 36-year-old Italian woman who resides in Barcelona had travelled to the Bergamo and Milan area of northern Italy between 12-22 February. She personally contacted Hospital Clínic on Monday night to report her symptoms before receiving her diagnosis a day later, the Catalan health department explained.

Describing her symptoms as ‘mild’, the Catalan health department secretary Dr. Joan Guix said the woman is not likely to have any further complications as the disease is more dangerous for the elderly and those with pre-existing health conditions.

Authorities are also currently identifying all the people she has been in contact with – thought to be 25 people – and will have them remain in quarantine at home for 2 weeks. There are another 7 or 8 people who are being tested for the virus in Catalonia and 11 others who have already tested negative.

Mirea Jané, the Deputy Director of Public Health Survey and Response in Barcelona stated on Tuesday evening that, ‘..we are [now] following the contacts of this case. We have identified at this moment around 24 or 25 people, we are still carrying out tests to identify all the other contacts. We are saying that they need to stay at home, quarantined at home, that is our instruction at this time.’

‘We believe we will be able to contain the cases,’ said Dr. Assumpta Ricard, who manages the Catalan Health Service’s integral health processes.

Meanwhile on Tuesday evening Austria placed a hotel in the Alpine city of Innsbruck under lockdown after an Italian receptionist working there contracted Coronavirus, becoming one of the country’s first cases.

‘No one can get in and out of the hotel to make sure that if other infected people are staying in the hotel, the virus won’t be spread,’ Austrian Interior Minister Karl Nehammer told a press conference.

‘All these measures have one purpose – to stop the virus and its spread. There is no reason to panic,’ he added.

People in Spain who suspect they could have Coronavirus should call the emergency number 061 for more information rather than go directly to emergencies.