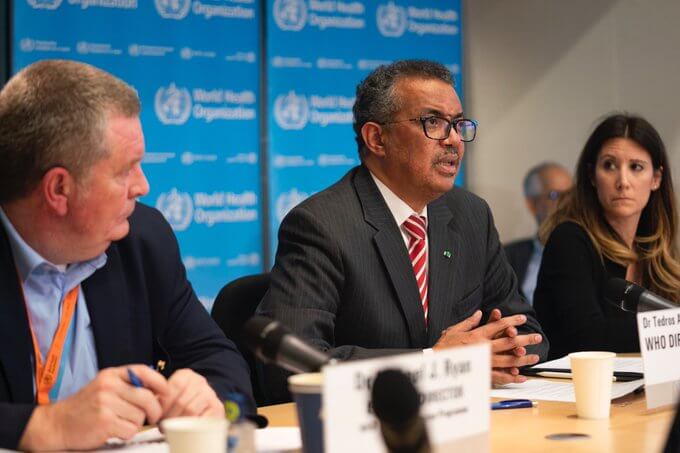 The head of the World Health Organisation (WHO), Tedros Adhanom Ghebreyesus, declared Coronavirus (Covid-19) as ‘a pandemic’ on Wednesday evening, adding that he was ‘deeply concerned’ by the ‘alarming levels of inaction’. He confirmed that the number of cases outside China had increased 13-fold in the past fortnight. There are now 118,000 cases in 114 countries and 4,291 people have lost their lives.

The death toll from Coronavirus in Italy rose from 631 to 827 on Wednesday. The total number of confirmed Covid-19 cases there increased by more than 2,000, from 10,149 on Tuesday to 12,462 today. As reported on Tuesday, Spain has banned all flights arriving from Italy at least until 25 March.

German chancellor Angela Merkel warned that up to 70% of the population in Germany would become infected with Coronavirus unless measures are found to slow the spread of the outbreak.

Figures from the Spanish Health Ministry at 6pm on Wednesday 11 March confirm that there are now 2,128 confirmed cases of Coronavirus throughout Spain. There have been 47 deaths and 142 people remain in intensive care.

After Spanish Prime Minister Pedro Sánchez acknowledged on Tuesday evening that the economic impact in Spain of Covid-19 was going to be ‘serious’, further measures have been taken throughout Wednesday in order to stem the spread of the outbreak.

Some critics and political rivals, however, have claimed that Spain is doing too little, too late.

Announcing an action plan to ‘combat the emergency’ and promising that the Spanish government would do ‘what is needed, where it is needed and when it is needed’, Sánchez promised resources would be provided to support the welfare of Spanish families, to protect workers who are laid off, as well as supporting small businesses with problems of solvency. Specific measures would further be applied to Spain’s important tourism and travel sector.

‘We have a few difficult, tough weeks ahead of us, but we will prevail, and we will deal with this as quickly as possible and with the least harm possible if each member of society, from civil society to all the public authorities, plays our own role,’ said Sánchez.

Also late on Tuesday evening, Ximo Puig, the president of the Valencia region, announced the postponement of the famous Las Fallas festival due to the Coronavirus outbreak, in order ‘to protect the health of the Valencia community’. The annual festival normally attracts over a million visitors to the city to celebrate a parade of huge figures which are then set on fire.

After yesterday’s announcement of school closures in Madrid, in Álava and Labastida in the Basque Country, as well as in La Rioja (northern Spain), authorities in Madrid also took extra measures to limit access to public spaces, with the temporary closure of libraries and sporting facilities, as well as many cultural and exhibition venues. Measures were also being taken to disinfect all public transport on a daily basis. Any events expected to draw crowds of over 1,000 people have also been suspended.

‘The country is not being locked down or movement impeded, but we’re asking people to be responsible,’ insisted Fernando Simón, director of the ‘Coordination Centre for Health Alerts and Emergencies’, which reports to Spain’s Health Ministry, in a press briefing during Wednesday.

He also said that at best case, the Covid-19 epidemic could come to an end in Spain in two months. ‘In the worst case,’ he said, ‘it could last four or five months.’

Supermarkets in some regions have also been overwhelmed by shoppers panic-buying with essentials such as toilet paper, pasta and milk. Long queues formed at stores in Madrid despite authorities insisting that there are no foreseeable supply issues.

In Catalonia 156 people have been diagnosed with Coronavirus. This is an increase of 31 compared to the Catalan authorities’ last update on Tuesday afternoon.

Spain’s ‘excess mortality’ during Coronavirus pandemic is over 43,000