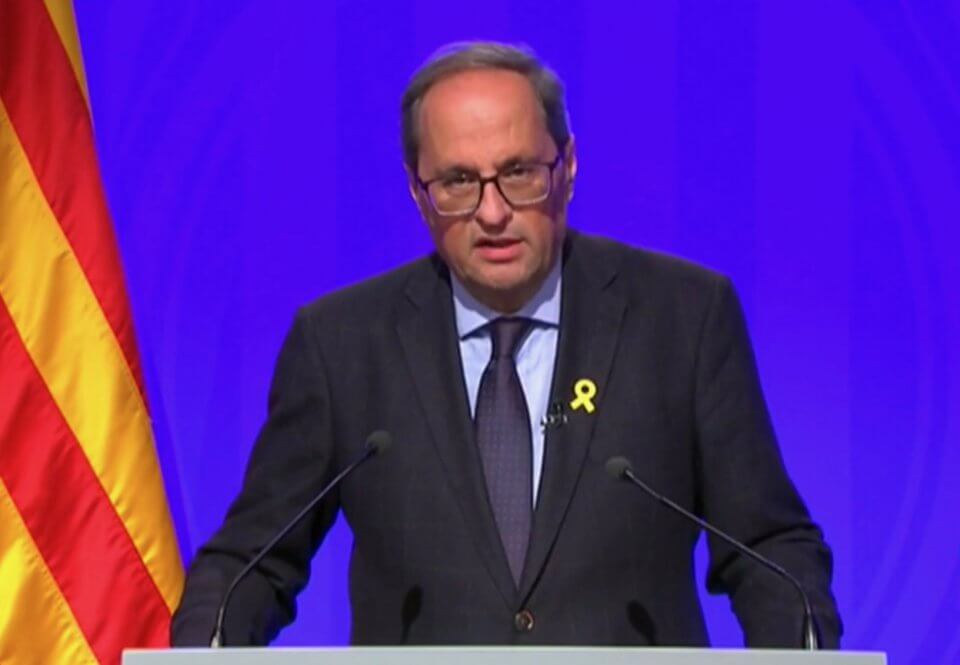 Spanish Prime Minister Pedro Sánchez declared a ‘state of alarm’ in response to Coronavirus (Covid-19) on Friday, a measure that will come into effect on Saturday, as the World Health Organization (WHO) also declared Europe as the new epicentre of the pandemic.

Just before 9pm on Friday evening, Catalan president Quim Torra also announced that Catalonia would be in lockdown due to the Coronavirus outbreak, with restrictions on entry and exit of the territory.

Torra did not specify when the measure would come into force, but asked Spain for collaboration in blocking the main ports and airports, which are under the control of Madrid, as well as the main train links. Torra said, ‘We can’t afford that the health system comes to a standstill.’ Catalonia has a population of approximately 7.6m.

‘The Catalan government has contacted Prime Minister Pedro Sánchez to inform him of Catalonia’s confinement,’ said Torra. ‘And I’ve requested his help at ports and airports.’

‘It’s time to curb the spread; time to confine ourselves,’ said Torra. ‘I want to thank the citizens of Catalonia for the effort you’re making. I want to express my gratitude for the tireless, generous work of our security and emergency forces.’

‘We believe that all of Catalonia must be confined. I’m calling on you to make this effort. We need to take a step forward with a confinement to protect ourselves,’ he added.

As infections and deaths soared across Europe on Friday, the WHO chief Tedros Adhanom Ghebreyesus said that Europe now had ‘more reported cases and deaths than the rest of the world combined, apart from China’.

Italy, Spain and also Iran have emerged as Coronavirus hotspots, after a dramatic rise in cases and fatalities in the past 24 hours. The overall death toll has jumped to more than 5,000 across the globe, including nearly 1,500 in Europe.

Italy, still the hardest-hit country in Europe, recorded its highest one-day toll with 250 deaths over the past 24 hours.

At 6pm on Friday the Spanish Health Ministry confirmed that there are now 4,231 confirmed cases in Spain, with 121 people now known to have died from it. 1,990 people are confirmed as infected in Madrid, 417 in the Basque Country, 316 in Catalonia, 259 in La Rioja (northern Spain) and 219 in Andalusia.

The specific details for Spain’s state of alarm will be announced on Saturday, but it will mean that Pedro Sánchez’s government can restrict the movement of people, among other liberties, as well as be able to guarantee the supply of food and other essential services to all areas across Spain.

This is only the second time since the Spanish Constitution came into force in 1978 that a ‘state of alarm’ has been called in Spain. The only other time was in December 2010 when the army was called in to ‘normalise the essential public service of air transport’, after air traffic controllers across the country went on strike without notice.

The state of alarm in Spain will be in place for 15 days from Saturday. Measures can include the government prohibiting the movement of people or vehicles at specific times, intervention and temporary takeover of industries and factories, a limit or rationing of the use of services or consumption of basic necessities, as well as issuing orders to ensure the supply of food markets, medicine and other products.

At around 3.30pm on Friday, Sánchez announced that his government would mobilise resources from Saturday ‘to better protect the public health’, including civil and military resources as well as public and private ones.

He also urged citizens to ‘avoid contact’ and recommended staying at home, calling such safety measures ‘heroism’. ‘Several very tough weeks are ahead of us,’ he said, adding that Spain was ‘only in the first phase of the fight against the virus’.

‘Unfortunately we cannot rule out that over the next week we could reach more than 10,000 infections,’ said Sánchez.

‘Victory depends on every single one of us. Heroism is also about washing your hands and staying at home. We will stop this virus together,’ he said.

A tweet from the Spanish health authorities @SaludPublicaEs confirming the 4,231 Coronavirus cases at 6pm on Friday 13 March, region by region:

Friday also saw other stricter measures come into effect across Spain in order to try and contain the further spread of Coronavirus.

As reported yesterday, since midnight on Thursday the authorities in Catalonia stopped anyone entering or leaving the towns of Igualada, Vilanova del Camí, Santa Margarida de Montbui and Òdena, other than emergency services. The measure affects around 67,000 residents.

Alba Vergés, responsible for the Catalan government’s health department and herself a resident of Igualada, was emotional as she explained that the action was not being taken lightly. ‘If we take this measure it is because we are absolutely sure that it is necessary. Basic services need to work as normally as possible.’

Six people are known to have died from Coronavirus in Catalonia, with 35 patients in a serious condition. There are 58 health professionals among those diagnosed.

The Basque Country on Friday morning also declared a health emergency, making it possible for the region to order similar confinements and ‘lockdowns’, if required.

Global financial markets continued on a rollercoaster, sparked by fears that the deadly Coronavirus outbreak will lead to a worldwide economic recession.

Formula One motor racing was also in turmoil with the first three Grands Prix of the season – Australia, Bahrain and Vietnam – scrapped.

Spain officially in lockdown from midnight