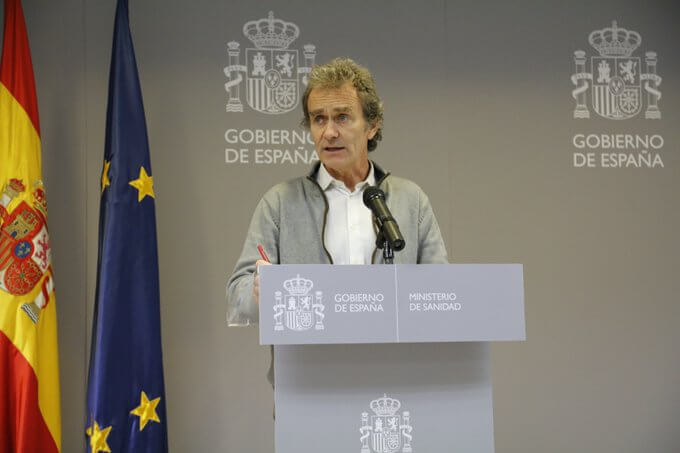 The number of people infected with Coronavirus in Spain had risen to over 70 on Sunday, as authorities started to consider more restrictive measures across the country, including with regards public gatherings.

‘The scenario is evolving very rapidly, fundamentally in Italy and therefore also in Spain,’ said Fernando Simón, director of the ‘Coordination Centre for Health Alerts and Emergencies’, which reports to Spain’s Health Ministry.

Spain’s first confirmed cases in Tenerife and Catalonia were linked to the Coronavirus hotspot in northern Italy. Cases have since been diagnosed in Madrid, the Balearic Islands, Aragón, Castilla y León, Andalusia and the Valencia region. One of the most serious cases is a 77-year-old man who is in the intensive care unit of Torrejón de Ardoz Hospital, east of Madrid.

Three more cases were confirmed in Catalonia on Sunday afternoon, taking the number of people infected there to 12. One is a 28-year-old man residing in Barcelona who had been in Milan from 20-23 February, and the other two are women, aged 16 and 20, who had travelled from Girona to the north of Italy from 14-16 February.

Worldwide, the virus has now hit over 60 countries, with more than 2,900 people killed and over 85,000 infected since it was first detected at an animal market in the central Chinese city of  Wuhan late last year.

South Korea reported its biggest surge in new Coronavirus cases during the weekend as concerns also grew of a possible epidemic in the United States. The World Health Organisation (WHO) has since raised its risk alert to its highest level.

The vast majority of infections have been in China but more daily cases are now logged outside the country, with South Korea, Italy and Iran emerging as major hotspots.

ALSO READ: Coronavirus detected in Tenerife and Catalonia – via Italy

The virus has also spread to new zones in recent days, reaching nine new countries including Azerbaijan, Mexico and New Zealand, as well as reaching sub-Saharan Africa with Nigeria reporting its first case.

‘We have now increased our assessment of the risk of spread and the risk of impact of COVID-19 to very high at global level,’ WHO’s Tedros Adhanom Ghebreyesus said on Friday.

The first fatality from Coronavirus has been confirmed on US soil, as President Donald Trump on Saturday urged Americans not to panic.

The death occurred in King County, home to Seattle, a city of more than 700,000 people. The victim was in his 50s and reportedly had ‘underlying health conditions’.

Speaking at a White House news conference Trump said that ‘additional cases in the United States are likely’ but added that ‘healthy individuals should be able to fully recover’.

‘Our country is prepared for any circumstance,’ Trump insisted, calling on ‘the media and politicians and everybody else involved not to do anything to incite panic.’