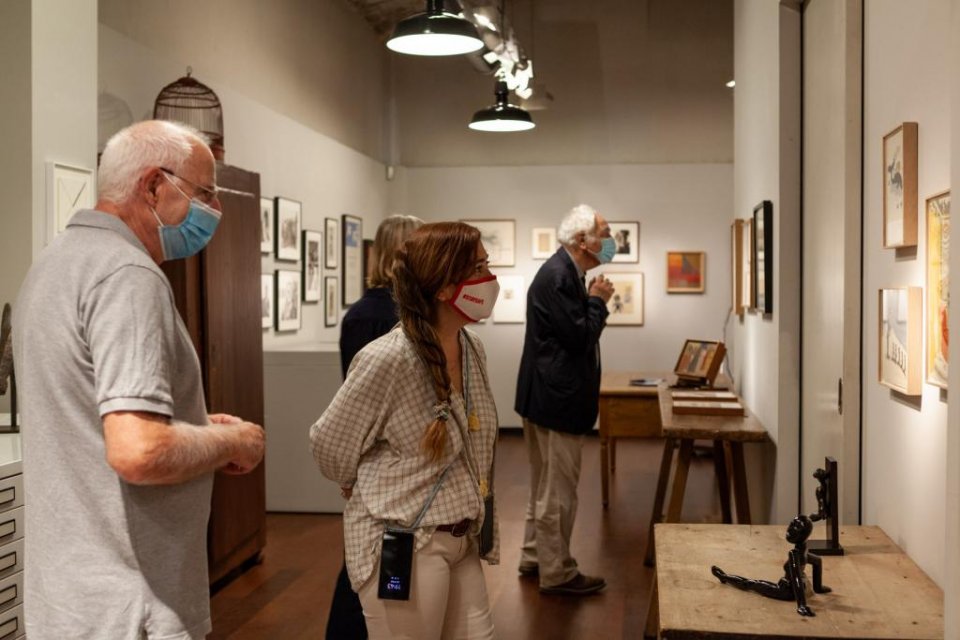 The Art Galleries of Catalonia (GAC) is a non-profit association dedicated to the communication, support and promotion of the visual arts in Catalonia, representing more than 40 galleries with different styles, trends and disciplines.

Since the end of September and running until the end of this year, the GAC galleries are offering over 50 exhibitions throughout Catalonia to start their 2021-22 season, reflecting a multi-faceted vision of the current trends in the art market. Apart from Barcelona, ​​the GAC programme includes galleries in Sant Cugat del Vallès, Terrassa, Sitges, Reus, Lleida, Blanes, l’Estartit and Cadaquès.

From Catalan artists of the turn of the 19th and 20th centuries – such as Joaquim Mir and Joaquim Sunyer – to current figures with international projection – such as Aaron Young and María Eugenia Trillo – to leading names of the 20th century, including Picasso, Miró, Tàpies and Warhol, the programme offers a full tour of different periods of art, with exhibitions in various expressions and formats.

Relevant names in modern art stand out in the programme of the GAC galleries: Joaquim Mir and Joaquim Sunyer (in Art Petritxol); Ramon Casas, Santiago Rusiñol and Hermen Anglada-Camarasa (at the David Cervelló Art Gallery), or Pau Gargallo (at the Roger Viñuela Gallery), among others.

There are also works by leading figures in 20th century art: Picasso, Joan Miró, Tàpies and Andy Warhol (in the Roger Viñuela Gallery); Joan Hernández Pijuán and Albert Ràfols Casamada (in the Jordi Pascual Gallery); Josep Guinovart (in Art Petritxol) or Eduardo Chillida (in Galeria Cortina and Artur Ramon Art) along with other more recent names, such as Arranz Bravo and Perico Pastor (in La Galeria).

The programme features many current Catalan artists: the realism of Marc Figueras (in the Galeria Jordi Barnadas), the contemporary figuration of Mònica Castanys (in Anquin’s Art Gallery), the aesthetic expressiveness of Núria Guinovart (Antoni Pinyol Gallery), the visual transgression of Jordi Alcaraz (in Atelier), the graphic freedom of Sandra Partera (in Artevistas Gallery), pop art by Narcís Gironell (In Espai Cavallers and L’Arcada Art Gallery), the natures of Esther Tenedor (in Galeria Mar), the juxtaposition of styles and formats by Carme Aliaga (in Espai G d’Art) or the sculptures, paintings and recent collages by Estrada (A34).

The start of the 2021/22 season also places a significant focus on photography. Diego Ferrari’s experience of the transformation of London in the turn of the millennium is on display at the Pigment Gallery, while Gothsland exhibits an important and relevant collection of original photographs from Hollywood films, depicting some of the most relevant actors and actresses of 20th century cinema.

Artur Ramon Art brings together textile pieces by six artists with works by Chillida, Kuba and a 200-year-old rug; Il·lacions Design Gallery programmes six parallel exhibitions, in six installations that adopt new languages ​​and formats in areas such as gastronomy and furniture, while Out of Africa gives voice to the protest art of Bob Nosa, made from collages and found objects.

Click here for full details of all the exhibitions taking place across over 40 art galleries until the end of the year.