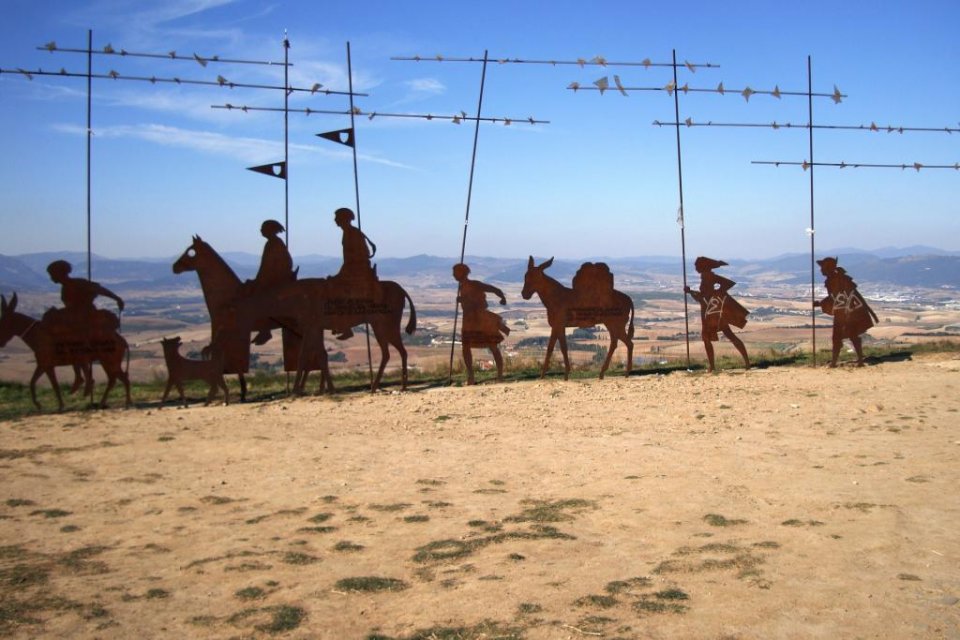 Perhaps the world’s best known pilgrimage is the Camino de Santiago, also known in English as the Way of St. James, from France to Santiago de Compostela in Galicia. A number of different routes have evolved over time, some starting from the north coast of Spain, some from Portugal and some from the centre of Spain. In 2019 some 350,000 peregrinos (pilgrims) visited the Pilgrims office in Santiago de Compostela. Why? And can so many people be wrong?

To find out, my wife and I decided we would do it. To say that she was surprised when I first suggested it would be an understatement. Her response was: ‘A 69 year old fat bloke who has had two heart attacks wants to spend six days walking over mountains? Where are the insurance policies?’

In choosing our route and not having the time it takes to walk all across northern Spain, we settled on the last 110km or so from Sarria in the province of Lugo to Santiago, the busiest route by far.

Our start on a damp and misty morning was a festival of quiet anticipation and excitement, with several hundred people virtually all unknown to each other gathering at the start from their respective lodgings to begin their sojourn. There was a palpable feeling of bonhomie and goodwill around the place, a feeling that would grow as each day passed.

The homogeneous lump of people that started strung out over several hours, with the young and fit striding out and the old and unfit becoming drag drivers in cattle drive terms. At the rear of the herd.

The walk itself was tough. Six long days, sometimes ‘on the road’ for eight or nine hours, up and down mountain tracks that were often unkind underfoot, uneven, rocky, and often damp and slippery. Rises of more than 1,500 ft and drops greater than 1,300 ft in a day were common – and at times it seemed to be anything but a pleasant stroll in the park. Sleep each night was not a problem.

We were walking in the beautiful Galician countryside, crossing streams and rivers via stone bridges that Lord knows were how many hundred years old. Along country lanes and through cornfields that were as high as the proverbial elephant’s eye. Forests of oak and eucalyptus trees, and more than once did the camphorus, minty aroma fill my lungs to get me up yet another hill. Mother Nature at her finest.

We met people, some of whom we exchanged stories with, like Rosa who was walking solo but ‘with a friend’ who had died as they had planned to do it together. Like Alvaro and his girlfriend and sisters, devout Catholics and walking for religious reasons. Like Francisco Javier Hebron, who was walking it for the 12th time, with his wife Marcella and their daughter in a pushchair, walking it to respect his family who had come from the Basque Country to settle in Galicia several hundred years ago. Like Claudio, who had just graduated from college in Italy and was doing it with friends to celebrate. Like Miguel, a scout from Colombia who walked with his scout troop bandera and country’s flag in order to qualify for a higher level of achievement. Like Neale, a Lloyd’s underwriter from New York City, who just liked to hike. Like the walking group of ladies from The Netherlands, one of whom had had a serious illness and wanted to find out if her body had recovered enough to tolerate the rigours of the walk. It had up to the point where we met them.

People passed us by, actually most people passed us by and they would greet us with a ‘buen camino’ and we would respond ‘igualmente’. And on the rare occasion we passed people by, we would offer our own ‘buen camino’. The faces became more familiar and the obligatory buen camino became just ‘bien’ or ‘todo bien’. Often I would lie and reply ‘si, si, todo bien’ when often I was struggling, especially on the hills. My wife would encourage me, ‘come on’, she would say, ‘poco a poco’. I looked at her. I was the one who had trained, I was the one who played sport until my mid-sixties and religiously gone to the gym, and here she was encouraging me! The shame of it all. It is true nonetheless that I carried a little, okay, a lot more weight than her.

We were the only English people that we came across, and we really got the feeling that many of those whose paths we crossed were actually looking out for us. We had become part of the Camino family and this was exemplified when on the last day and after a particularly long hard climb as we reached the top, Claudio and Miguel were stood cheering us up the last twenty or thirty metres, Miguel waving his flags in celebration. Humbling.

Six days spent in nature and her glorious sights, sounds and smells, removed from our minds those annoying, negative things that occupy far too much space. For six days everything was in the present and the clarity was startling and liberating, and the only thing to think about was putting one foot in front of the other. Nothing else mattered, everything else depended on being able to complete that simple task successfully. That was a lesson learned.

Folk of different ages, nationalities and cultures all moving in the same direction, each with the same purpose, wishing each other well, encouraging each other, acting with humility, grace, generosity and good humour, taking an interest in and treating each other with care and respect.

For six days, six gloriously free days, it was so much more rewarding than watching the news or reading a paper – and at a rather late age it renewed my faith in humankind. Without question or hesitation I would recommend that everyone takes a sojourn like this at least once in their life. It was one of, if not the most life affirming things I have ever done and three weeks after we returned my wife turned to me and said: ‘I guess we should do the Portuguese Way next year.’

Not good enough to be a musician, footballer or cricketer, Allan Young became an accountant and latterly a partner, now retired, in a UK-based financial services business. Husband, father and grandfather, Allan has spent some of the last 20 years travelling and enjoying the gastronomic, geographic and cultural differences that Spain has to offer, whilst grappling with the challenges of its various languages.