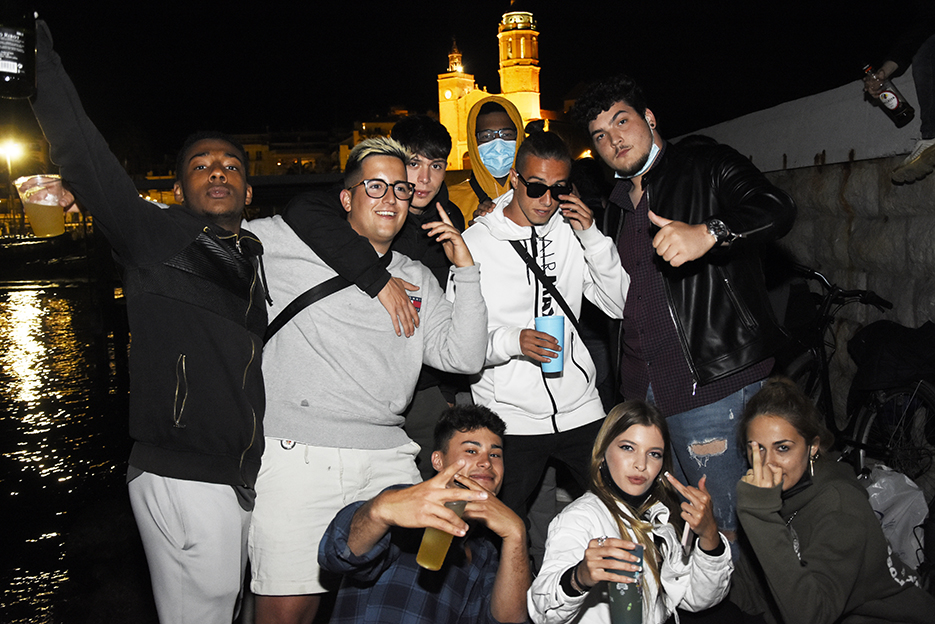 Dozens of youths took to the streets of Sitges in the early hours of Sunday morning, especially on the breakwater of La Punta, to celebrate the end of the State of Alarm. Others, with the bars still closed, celebrated the end of the period from their balconies. It has been more than six months with strong restrictions, but now the Covid-19 figures are starting to decrease and some euphoria is starting to be felt on the street.

Most of the activity early on Sunday morning was in the area of La Fragata and around La Punta pier. Dozens of youngsters – mostly teenagers – gathered to celebrate the end of the State of Alarm. In most cases they didn’t wear face masks or respect social distancing measures.

The breakwater had been one of the gathering points for young people at night during the summer and last autumn, before the curfew was introduced. On some occasions, the local police carried out extensive control operations, such as the one on the night of 11 September, after there had been 73 complaints. In the early hours of Sunday, there was also a local police patrol along La Ribera.

Apart from the concentration on the breakwater, celebrations of youngsters in other parts of the town have been more discreet. In some cases, people simply emerged on their balconies with the purpose of sharing the moment with other neighbours. The closure of bars and nightclubs has still prevented further activity – although there have also been some parties in private homes, as has been usual in recent months.

On Sunday itself, after nearly six months without being able to do so, bars and restaurants were allowed to open until 11pm to serve food again. It is a breath of fresh air for a sector that has been completely devastated, especially in a town like Sitges, with excessive pressure on rental prices and land.

Shops, gyms, cinemas and theatres are now also able to re-open until 11pm, although with capacity restrictions inside. Border restrictions have also been lifted, and citizens are once again able to move freely around Spain. However, the restrictions that may exist in the various Spanish communities should be taken into account: in the Canary Islands, the Balearic Islands and the Valencia region there is still a curfew and a negative PCR is needed to travel to the islands. Also read: Details of restrictions for all regions of Spain, now ‘State of Alarm’ has ended

Security measures still need to be taken to prevent a fourth wave of the pandemic, as most of the population is not yet vaccinated. Because of this, new cases of Coronavirus have not stopped, but the hospitalisations have. The battle is about to be won, but there is still a way to go.

Economic impact of pandemic: spending down by almost 30% in Sitges