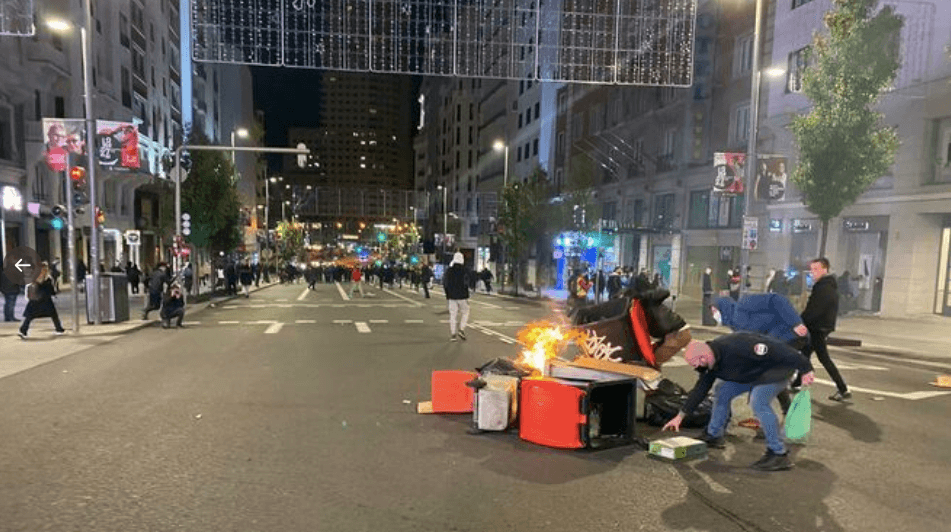 Authorities and many politicians in Spain have blamed ‘organised far-right groups’ for the vandalism and looting seen during two nights of sporadic protests that broke out over the weekend, against the ‘state of alarm’ restrictions imposed last week.

Since the country ordered a nationwide nighttime curfew and almost all regions have implemented regional border closures, police made dozens of arrests on Friday and Saturday nights, during clashes with protestors against the new Coronavirus restrictions. The main incidents occurred in Madrid, Barcelona and Logroño, with Málaga, Valencia and Santander, among others, also witnessing some violent clashes.

In Madrid an unauthorised protest on Saturday night saw dozens of demonstrators chanting ‘freedom’ and setting light to rubbish bins on one of the city’s main avenues, the Gran Via. Several shop fronts were damaged, as well as banks and other commercial premises. As police moved in to clear makeshift barricades that had been set up, they were pelted with stones and flares.

Twelve people, including three police officers, were lightly injured in the clashes, emergency services said. Police said they arrested 33 people. The head of the regional government of Madrid, Isabel Díaz Ayuso, blamed the unrest on ‘organised groups looking to take advantage of the situation and people’s fears’.

‘The people sowing chaos on the streets are not those most vulnerable to the virus, nor are they the ones fighting for their lives,’ she tweeted.

José Manuel Franco, the Spanish government’s delegate for the Madrid region, tweeted: ‘Those who caused the altercations are organised groups, enemies of freedom and unpatriotic. I do not care about their ideology, they do not deserve any respect and they only deserve the exemplary performance that the police [carried out].’

In Barcelona early on Friday evening, around 1,500 people gathered in front of the Catalan government headquarters in the Plaça Sant Jaume, including many directly affected by the closure of bars and restaurants.

According to Pere Ferrer, the head of the Catalan police (the Mossos d’Esquadra), the protest remained peaceful until ‘very violent and organised far-right groups’ arrived and started throwing metal fences and firecrackers at officers guarding the government building. After agents responded with batons, the clashes escalated, with the main incidents then taking place in Via Laietana, where garbage bins were set alight and used as barricades. There were 12 arrests.

Two shops, including a Decathlon store, were looted – with many young people seen breaking into the shop and leaving with bicycles and electric scooters.

Meanwhile in Logroño, the capital of the northern wine region of La Rioja, a group of 150 youths – reportedly from anti-globalisation and far-right movements – burned garbage bins and smashed shop windows on Saturday night. The trouble broke out following a peaceful protest against the closure of restaurants and bars in the region. Seven police officers were injured and seven individuals arrested.

On Sunday morning in Logroño a group of volunteers led by a 16-year-old boy started an improvised clean-up team alongside municipal workers. The initiative drew praise not only from local residents and politicians but also from Spanish Prime Minister Pedro Sánchez.

‘The youth of our country is this: generosity, responsibility, commitment,’ tweeted Sánchez. ‘Values that enhance us as a society. Thank you for your admirable reaction today in La Rioja. Our strength is in being able to count on each other. Let us continue to fight the virus with unity.’

Another ten people were detained in protests held in the northern cities of Bilbao and Santander. At least one person was also arrested in the southern city of Malaga after a small group of protestors overturned rubbish bins and threw bottles at police.