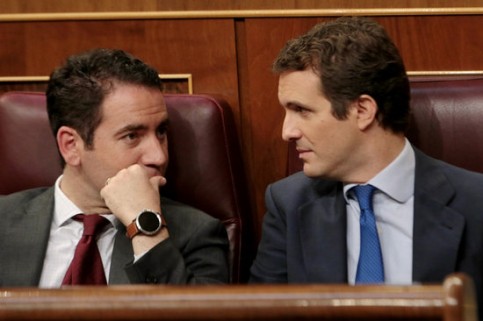 The acting Spanish government of the Socialist PSOE party has described calls from the right-wing People’s Party (PP) to nominate a new candidate for prime minister as ‘fantasy’, ‘insulting’ and ‘delirium’.

Teodoro García Egea, secretary general of the People’s Party (PP), said that ‘the only thing blocking’ Spanish democracy is the acting prime minister Pedro Sánchez because, he says, no one trusts the Socialist (PSOE) leader.

For this reason, he has requested that Sánchez step aside and propose another name in the second round of debates to name a Spanish prime minister that may serve to resolve the current political deadlock.

Egea went a step further again, calling for a ‘constitutionalist alternative’ from the Spanish socialists if they are not able to invest their candidate; namely, to bring the right-wing PP and Ciudadanos (Cs) party into the equation to try to invest a candidate of their own as prime minister. Such an investiture would require the abstention of the rest of the parties in the Spanish Congress, including the socialists.

‘If [Pedro Sánchez] does not know how to gain trust, let another candidate of another party be allowed to bring together a majority in the parliament, because [Sánchez] is the element blocking Spanish democracy,’ Egea said.

The PP party’s number two said they have ‘given a lesson to the left by agreeing on different government formulas.’ The PP remains anchored to the rejection of Pedro Sánchez as Spanish prime minister.

‘The dilemma is not Pedro Sánchez or elections, the issue can be resolved by promoting another candidature, or even with a constitutional alliance of the PP and Cs, with the abstention of the rest of the groups, including the PSOE,’ he proposed.

The PSOE rejected PP’s proposal, calling it both ‘insulting’ as well as ‘comical’. Spain’s acting Minister of Development, José Luís Ábalos described the proposal as ‘between fantasy and delirium’. It is ‘an example of diletantism’ and ‘an occurrence’ said the government spokeswoman Isabel Celaá. The PSOE president of Castilla-La Mancha, Emiliano García-Page called it ‘insulting’ and ‘comical’.

For their part, Cs did not back the calls for Sánchez to step aside. ‘The question is whether they can come to an agreement on the distribution of ministries,’ sources from the party of Albert Rivera say, that also consider any other proposal that is made is ‘for want of distracting’.

García Ejea remarked that ‘nobody trusts’ Sánchez, ‘not even Pablo Iglesias,’ the leader of left-wing Podemos, who the Socialists failed to make a deal with in the first round of investiture.

‘Pedro Sánchez has already chosen his partners; the pro-independence Catalans and the extreme left,’ he criticised. He also charged against a possible abstention from pro-independence Esquerra Republicana (ERC) party and said he was worried that the ‘moderate’ of a government would be Gabriel Rufián.