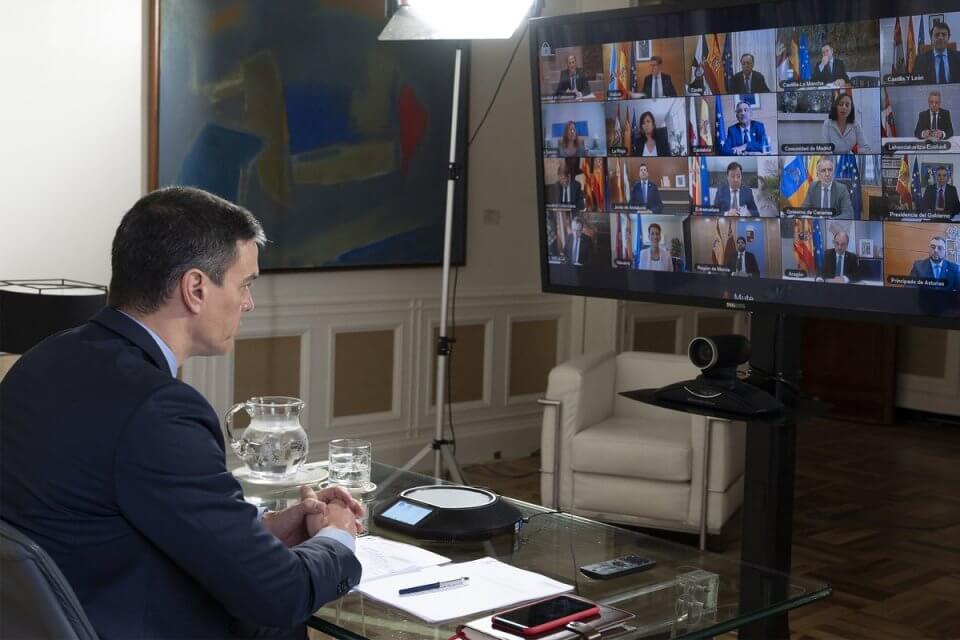 Report updated in Spain at 12h on Sunday 5 April.

Official figures released by the Spanish Health Ministry at 11.45am on Sunday 5 April confirm the lowest increase in deaths (674) from Coronavirus in ten days. There are now 130,759 known cases in Spain, 6,023 more than yesterday.

There are 58,744 people who have required hospital treatment in Spain for Coronavirus, of which 6,861 are currently in intensive care. 38,080 people have now made a full recovery, which is 3,861 more than yesterday.

Of the official figures announced, 37,584 confirmed cases are known to be in the Madrid region, and where 4,941 have died (from the total 12,418 across the country).

The current ‘state of alarm’ in Spain is to be extended until 26 April, subject to an official vote in the Spanish Congress next week.

Spanish Prime Minister Pedro Sánchez said in a televised statement on Saturday that ‘the cabinet on Tuesday will again ask for authorisation from parliament to extend for a second time the state of alarm until Saturday 25 April at midnight’.

‘More days under the state of alarm will follow,’ said Sánchez, ‘but they won’t be as long. We will begin to transition and get back to our old lives, socially and economically.’

‘We believe [the extension] is the time that our health system needs to recover. We have taken very strict but indispensable measures. We need to maintain them,’ added Sánchez, who also warned that lifting the restrictions could ‘lead to a second wave [of infections] when our resistance is at its lowest.’

Before his televised statement, Sánchez had made contact during Saturday with the leaders of Spain’s main opposition parties to seek their support for an extension to the current state of alarm. During Sunday, he will be making contact with Spain’s regional leaders, to also seek their support.

To formally extend the lockdown, Sánchez – who is leading a coalition government between his PSOE socialist party and the left-wing Podemos group – needs official approval through a vote in the Spanish Congress.

The Spanish government will hold a special cabinet meeting on Tuesday 7 April to determine the precise details of the lockdown extension, with the vote in the Spanish Congress to be held on Thursday 9 April.

During his televised statement on Saturday, Pedro Sánchez also called for political unity and a cross-party agreement similar to the Moncloa Pacts of 1977, which contributed to the roadmap of Spain’s transition to democracy after the Franco dictatorship. ‘There will be time for political debate, for now the enemy is Covid-19,’ said Sánchez.

Pablo Casado, leader of Spain’s right-wing People’s Party (PP) tweeted on Saturday that Sánchez had called him ‘to inform me that he will request Congress to extend the State of Alarm’. He added, ‘I have once again transmitted the support of the PP for the containment measures against Coronavirus.’

Casado had previously accused Pedro Sánchez of ‘improvising’ and that his handling of the Coronavirus crisis was an ‘explosive cocktail of arrogance, incompetence and lies’.

Inés Arrimadas, leader of the Ciudadanos (Cs) party, also indicated that her party would support an extension of the state of alarm.

Santiago Abascal, leader of Spain’s far-right Vox party, has been repeatedly calling for Sánchez to resign, as well as his second deputy prime minister, Pablo Iglesias, the leader of the coalition’s left-wing Podemos party. On Saturday Abascal refused to accept the call from Sánchez.

The Spanish government initially declared a lockdown for two weeks commencing on 14 March, with measures that confined everyone to their homes apart from leaving to purchase food or medication, or to go to their place of work only if they could not perform their duties from home.

After the first week was completed, the measures were extended by the Spanish Congress until 12 April.

From Monday 30 March, further new measures ordered all non-essential workers in Spain to also remain at home until Thursday 9 April inclusive, thereby only returning to work after the Easter weekend (Friday 10 and Monday 13 April are holidays in most regions of Spain).

It is understood that the proposed new extension of the state of alarm will not apply to the emergency decree ordering all non-essential activity to also cease until Thursday 9 April. Therefore all non public-facing work should be able to resume again after Easter, subject to the vote in the Spanish Congress.

In his statement on Saturday, Sánchez did warn, however, that more confinement measures may still be applied even after the new 26 April deadline. ‘I am announcing that more days under the state of alarm will come, but they will not be the same.’

Sánchez also said he was confident that the latest Coronavirus figures showed that the outbreak was slowing in Spain. ‘In the next few days, the curve will flatten and the peak will be left behind,’ he said. ‘We are very close to achieving it. But now it is again time to implore for sacrifice, resistance, to keep our spirits high.’

‘When we have the curve under control, we will transition towards a new normality and to our economic recovery. For weeks, a specific team of epidemiologists has been putting together a plan on how to resume economic and social activity,’ he said.

Spain’s Interior Minister Fernando Grande-Marlaska had also previously said that any further extension decision would be made on the advice of medical experts and ‘on a scientific basis’.

During his televised statement on Saturday, Sánchez also called on the European Union to provide a coordinated response to the Coronavirus crisis. ‘If the EU exists it is to face challenges like this one. We did it after the Second World War and we have to do it now. This is the biggest crisis of our lives,’ he said.

The Spanish prime minister also had a message for the country’s elderly population. ‘We are going to fight for you. All lives are worth the same. We are going to take care of you as you have taken care of us,’ said Sánchez.

THE QUEEN TO ADDRESS BRITISH PUBLIC

In the UK, the death toll of those who had tested positive for Coronavirus rose by 708 to 4,313 on Saturday, with a 5-year-old who had underlying health issues among those who had died. 40 others who had no known previous health conditions also died.

The Queen will make a very rare address to the British public on Sunday evening, asking people to show the same ‘self-discipline’ and ‘good-humoured resolve’ as previous generations when taking on the challenge and disruption caused by Coronavirus. She will also thank healthcare workers on the front line and recognise the pain already suffered by many families.

Excluding Christmas broadcasts, it will be Queen Elizabeth’s fifth special televised message to the country during her 68 years on the throne.

The last special address was in 2012, following celebrations to mark her 60th year as monarch. It was a decade after the broadcast following the death of her mother, the Queen Mother, in 2002 when she thanked Britons for their messages of condolence.

She also gave an address at the start of the Gulf War in 1991, and – perhaps most famously – delivered a sombre live broadcast after the death of Princess Diana in a car crash in 1997, following a national outpouring of grief and criticism of the royal family’s response.

‘I hope in the years to come everyone will be able to take pride in how they responded to this challenge. And those who come after us will say that the Britons of this generation were as strong as any,’ the 93-year-old monarch will say on Sunday evening, according to extracts released by Buckingham Palace.

‘That the attributes of self-discipline, of quiet good-humoured resolve and of fellow-feeling still characterise this country.’

Sunday’s address will be aired at 8pm UK time. It has been recorded at Windsor Castle where the monarch is staying with her husband Prince Philip, 98.

Buckingham Palace also stated that the address was filmed in a large room to ensure a safe distance between The Queen and the cameraman, who was wearing personal protective equipment and was the only other person present.

Earlier this week Prince Charles, 71, came out of self-isolation after seven days. On Friday 3 April, from his home in Scotland, the heir to the throne ‘remotely’ opened the new temporary NHS Nightingale Hospital at London’s Excel exhibition centre.

The Head of Nursing @NightingaleLDN unveiled a plaque on behalf of HRH to officially mark the opening of the hospital which will provide support for thousands more patients with coronavirus. pic.twitter.com/N1ABmxehx6

Lockdown in Spain to be extended until 26 April