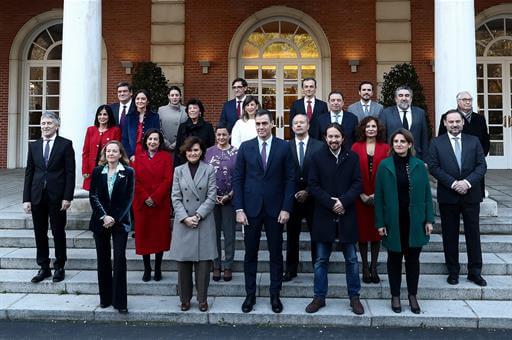 Spanish Prime Minister Pedro Sánchez, officially re-elected on Tuesday 7 January, presided over his first new coalition cabinet meeting in Madrid on Tuesday, together with his four deputy PMs and 18 ministers.

Pablo Iglesias, one of the four deputy PMs and the leader of the left-wing Podemos party that forms the coalition government with the PSOE socialists, sat to Sánchez’s left.

One of the first agreements of the new cabinet was to approve raising pensions this year in line with inflation. Spain’s 11 million pensioners will see their pensions rise by 0.9% in 2020, the expected inflation rate, to ensure they ‘do not lose purchasing power’, Sánchez told the media after the measure was approved.

If the inflation rate is higher than 0.9%, pensioners will receive a payment in early 2021 to make up the difference, Sánchez also explained. Pensions in Spain stopped being linked to inflation in 2014 as part of austerity measures introduced by the previous government during the financial crisis.

The full agreement of the new coalition government is called Coalición progresista. Un nuevo acuerdo para España (Progressive coalition. A new deal for Spain) aiming primarily to impose a higher tax on the wealthy and to also repeal a number of labour reforms.

Sánchez first came to power in June 2018 after pushing out his right-wing People’s Party (PP) predecessor Mariano Rajoy in a no-confidence vote. But he was then forced to call an inconclusive election in April 2019 after Catalan pro-independence groups refused to back his draft budget. Spain remained in a political gridlock for most of 2019 after a second inconclusive general election in November. Sánchez finally took over as the head of this new minority coalition government after securing his investiture by a margin of just two votes last week.

On Tuesday Sánchez also reiterated his intention to hold a meeting with the Catalan president, Quim Torra, as soon as possible – despite the fact that Supreme Court has not yet ruled on the Spanish Electoral Authority (JEC)‘s decision to strip him of his MP status.

Talking to the media after the cabinet meeting, Sánchez said he has ‘no problems’ when it comes to sitting down alongside Torra.

‘He continues being the Catalan president,’ Sánchez said, adding that he wants to see him ‘as soon as possible.’

To gather enough support to stay in power, Sánchez’s PSOE party also forged an agreement with the Catalan pro-independence Esquerra Republicana (ERC) to commit to dialogue over the Catalan political crisis. The ERC-PSOE agreement sets out the creation of a bilateral negotiating table between the Spanish and Catalan governments up to 15 days after the formation of the Spanish government and states that ‘political means’ should be favoured whilst ‘overcoming the judicialization’ of the Catalan independence conflict.