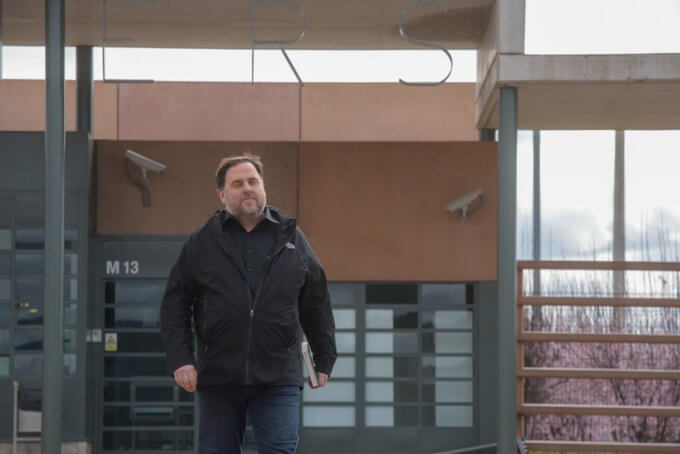 All nine of the Catalan political leaders and activists sentenced from 9-13 years in prison for their roles in the October 2017 independence referendum in Catalonia have now been granted regular temporary release.

It follows the decision of the Lledoners prison board on Thursday to now also grant Jordi Turull and Josep Rull  temporary leave, from Monday to Friday for 12 hours every day.

The seven others – Oriol Junqueras, Raül Romeva, Jordi Sànchez, Jordi Cuixart, Joaquim Forn, Carme Forcadell and Dolors Bassa – had already been granted temporary leave. They are all being allowed to work or volunteer for three to five days a week, up to 11 hours a day, while some have also been granted leave in order to take care of elderly relatives – although they all have to return to jail each night to sleep.

All nine leaders are currently serving up to 13 years for sedition – having been sentenced by Spain’s Supreme Court on 14 October 2019.

The leave granted to them follows Article 100.2 of Spanish prison regulations, applicable to prisoners who fall in the medium category sentencing and who have served a quarter of their sentences.

During the Catalan Trial, however, prosecutors requested for the sentences to include a clause for which none of the officials could enjoy any temporary leave until they had served half of the conviction. This was rejected by the Spanish Supreme Court, and the penitentiary judges have also ruled it out.

Oriol Junqueras, the jailed former Catalan vice president, left prison for the first time on Tuesday under the terms of the temporary leave granted to him, in order to work for six hours a day, three days a week at a university.

He is to work at a university campus in Manresa, for the Bages University Foundation (FUB), a private organisation that provides courses for students in Catalonia. He will have his own office will begin preparing the history course that he will start to teach after Easter.

The history course is reportedly available to anyone who is interested in taking it, and the university authorities aim to make the presence of Junqueras on campus ‘as normal as possible’.

The former Catalan ‘foreign affairs minister’, Raül Romeva, also left prison for the first time on Monday. For three days a week he is to work for a private organisation, evaluating the progress made in the 25 years since the Dayton Peace Accords ended the Bosnian War.

The Spanish prosecutor had opposed Cuixart’s temporary leave, arguing that the offence was ‘exceptional’ and required a ‘restrictive interpretation’ when awarding daytime release from prison.