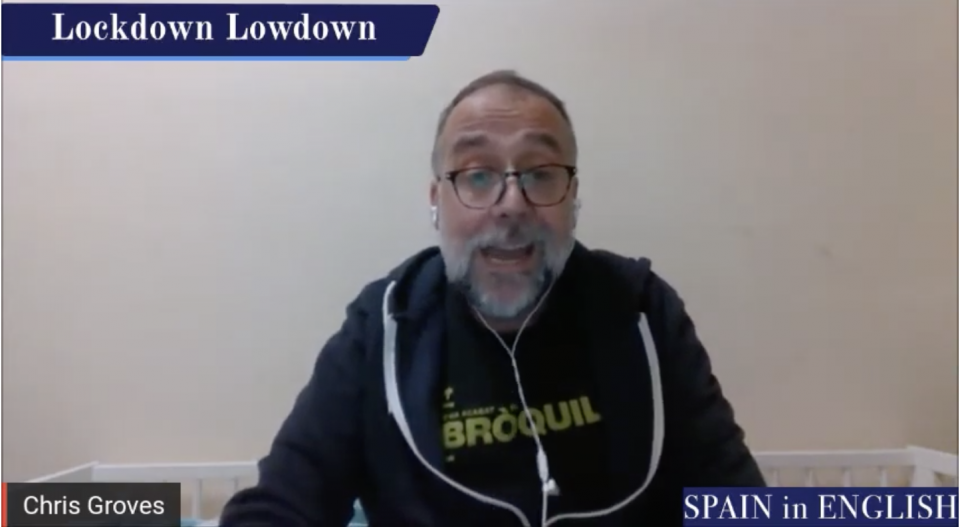 After several nervous days and weeks, this might be the good news you’ve all been waiting for in Spain … or it might not …

Chris Groves, the ‘multi-lingual’ and ‘hugely successful’ (Editor’s note: who wrote this?) Barcelona-based stand-up comedian and Catalan TV star, is currently surviving well in lockdown in his Barcelona home, and he is confident that his brand new one-man show entitled ‘Being Catalan(ish)’ will be ready to hit theatres as soon as we’re all allowed outside again.

‘Famed’ for performing stand-up in English, Spanish and Catalan, the many other accomplishments of British comedian Chris Groves include being the founder and host of the Cave Comedy Club in Barcelona, co-founder and host of Sitges Comedy Club, team captain of the occasional yet popular radio quiz show The Weekly Noticias – as well as a star presenter of the TV show, Manual de Supervivència, for TV3 Catalunya.

If that’s not enough, Chris also secured eight GCSE O’Levels and a special mention at the Henfield Village Craft Fair for the under 8’s Woodcraft Category.

Promising to keep everyone’s spirits up whilst in lockdown, the ‘multi-talented’ Chris has just launched his own online (and soon-to-be-blockbuster) series called ‘Lockdown Lowdown’ – in association with Spain in English.

Here, to kick the series off, we’re posting a link below to the introduction ‘teaser’. Over the coming days, weeks or months (but we hope not) – Chris Groves will be trying to cheer us up whilst we’re all in lockdown, explaining some of his own ‘harrowing ordeals’ as a ‘hugely successful’ (Editor’s note: again?) Barcelona-based stand-up comedian and TV star confined to the comfort of his own home.

Apparently he’ll be giving ‘incredibly useful survival tips’ to his ‘global fans’ about how to survive the lockdown, as well as interviewing ‘special guests’ and ‘other personalities’ via video-conference, when and if he can work out how to use the technology.

So here’s Chris explaining what the Lockdown Lowdown is all about. Episode One is coming soon.

Enjoy – and stay at home and stay safe.