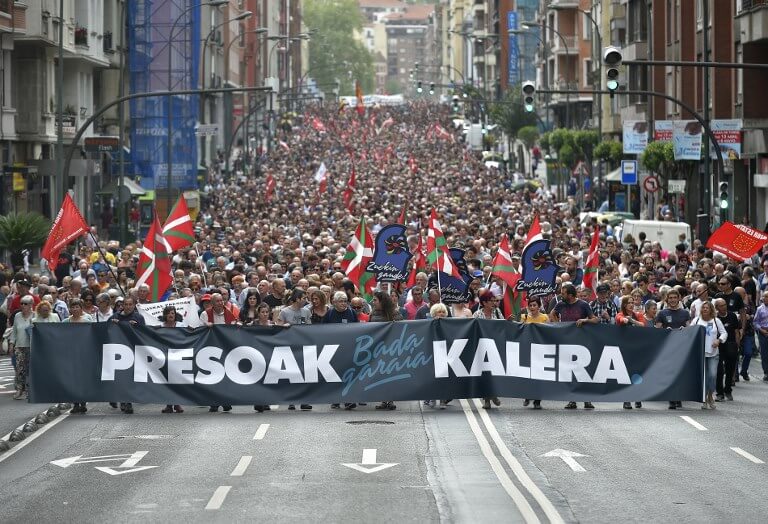 Ask Basques about whether they were shocked by the scale of the police brutality and judicial repression of the Catalan independence movement in recent weeks, and you get back a wry smile.

For the Basque Country, located on the other side of the Pyrenees from Catalonia and straddling the French-Spanish border, political prisoners is something they know only too well, an experience that remains part of their present as well as their past.

In September, 47 Basque lawyers, doctors and others were sentenced by a Madrid court, accused of membership of a group that no longer exists – ETA, the armed pro-independence organisation which fought a five decade long bloody conflict with the Spanish state.

The 47 agreed to a plea deal which saw suspended sentences of two years each for 45 of them, and a five month jail sentence for the other two. If they hadn’t agreed, they could have faced 20 years imprisonment.

One of the accused, Amaia Izko, is a lawyer who was arrested in February 2015 for entering a Spanish Court to represent Basques accused of terrorism in a previous mass trial.

‘We’re standing here accused of terrorism, with some of us, as lawyers, accused based on the practice of our profession and our defence of cases like this,’ Izako said before the trial in September.

This is just one of multiple recent examples of Spain’s controversial approach to ‘justice’, and casts the sentencing of the Catalan 9 – the leaders of the independence movement in 2017 who collectively face 100 years in prison on charges of sedition and misuse of public funds, which sparked the wave of revolt in Catalonia in recent weeks – in a different light.

While the international community was stunned by the Catalan sentencing, from the Basque perspective it looks like more of the same, only applied now to the Catalans as well.

The case of the 47 highlights that whilst ETA officially dissolved in 2018, its shadow is long, and the Spanish state has little interest in letting it die quietly. Indeed, the terrorism tag is no longer only a stick to beat Basque independentists.

Tsunami Democratić, the grassroots independence group that has led the coordination of recent protests following the Catalan trial verdict, is being investigated by Spain’s National Court over ‘terrorism’-related charges. The Spanish Interior Minister Fernando Grande-Marlaska even went as far as to state last week that ‘the violence in Catalonia has been of a greater impact than that of the Basque Country‘.

Of course the history of violence in the Basque Country is not as one-sided as Spanish political figures like Marlaska would have us believe. Marlaska also happens to be a Spanish judge, who has an interesting track record of his own. Five of his verdicts have been condemned by the European Court of Human Rights (ECHR) for failing to investigate alleged torture and police brutality of detainees.

Police torture and brutality casts a long shadow over the Basque Country. A report published last year by the University of the Basque Country and the Basque Government found that 4,113 Basques were tortured by Spanish and Basque authorities between 1960-2014, continuing well after dictator Franco’s death in 1975. The report was the first time a public institution in Spain admitted government authorities had carried out torture. The Spanish authorities have been pardoned in many of the cases.

This background is essential for understanding why the Basque Country – considered by most linguists to have the oldest language in Europe, which is the foundation of its national identity (the Basques call themselves Euskaldunak, which literally means Basque Speakers) – is not on fire at the moment for its independence like Catalonia is. The history of the conflict between the Spanish Government and ETA – which only declared a ceasefire in 2011 – still weighs heavily on Basque political consciousness, a psychological scar that textures all talk of Basque independence.

However, history never ends, and there are signs of a new dawn for Basque independence politics. Igor Zulaika, International co-ordinator for EH Bildu, the Basque Country’s left pro-independence coalition, says the Catalan crisis is opening up new horizons.

‘For 40 years we’ve been saying that Francoism didn’t go away, and now more people are seeing that,’ Zulaika says. ‘So what we believe now is that the only way to move forward for us is to try to articulate our pro-independence process with that in Catalonia.’

On 25 October, EH Bildu joined with the three main Catalan independence parties – Esquerra Republicana (ERC), Junts per Catalunya (JxCat) and CUP – as well as others from Valencia, Galicia and elsewhere – to sign the Declaración de Llotja de Mar, which committed the parties to join forces around a common programme of action, based on supporting self-determination, political and social rights, and freedom for prisoners.

Zulaika says the declaration is an indication of their strategy to ‘stand up for our rights and bring together the unity of the Basque and Catalan processes’.

However, EH Bildu’s strategy is not shared by the largest party in the Basque Country, the Basque Nationalist Party (EAJ-PNV), which refused to sign the Declaración de Llotja de Mar despite their sister party in Catalonia, JxCat, doing so.

‘The text focuses almost exclusively on the complaint, in a very aggressive tone with the Spanish state, and is hardly constructive or proactive,’ EAJ-PNV president Andoni Ortuzar said after its publication.

The party, rooted in a Christian-democratic political tradition, has historically been cautious about pursuing independence, and is even ambiguous about its desire to establish a Basque state at times. It has accrued power through being willing to do deals with Madrid.

In the last budget of former Spanish prime minister Mariano Rajoy in May 2018, EAJ-PNV had said they would not agree to pass it through the Spanish Congress whilst Rajoy’s Article 155, which shutdown the Catalan Parliament following the 2017 referendum bid, was still in force. However, at the last minute they agreed to a deal that would see increased spending in the Basque Country.

‘For responsibility’, was the reason PNV’s Buru Batzar gave for the last minute volte-face.

In 2005, Juan José Ibarretxe, EAJ-PNV’s former president of the Basque Parliament, drew up a plan for a Basque independent state in association with Spain. It was swiftly withdrawn after Madrid put its foot down, never to be heard of again.

‘We like guarantees and to keep what we have. We are not up for leaps in the dark,’ Ortuzar said in July.

In this, Ortuzar may well reflect the current mood of the Basque people. Whilst parties which support the right to Basque self-determination – EAJ-PNV, EH Bildu and Podemos – commanded 47% of the vote between them in the May election, the latest Basque independence opinion poll In July suggests support for Basque independence is just 31%, with 48% for ‘No’.

Zulaika believes that while the Catalan situation can push more people in the Basque Country towards independence, the bigger factor will be the growing backlash from Madrid, now increasingly led from the front by the centre-left acting prime minister Pedro Sanchez, who has hardened his stance since the Catalan trial sentencing in October.

‘The whole of Spanish society is moving towards a more regressive policy, not only on the right-wing but also on the progressive left. What we expect is that regression is going to force Basque society to react,’ he says.

Zulaika points to a recent ruling by the Spanish constitutional court on student grants as an example of the form this backlash could take in the Basque context, and how it could instigate resistance.

‘The ruling said Basque institutions cannot give better terms to students than the rest of the Spanish state. So Basque students, even though the cost of living is significantly higher than in for example Extremadura [south-west Spain], can’t get better grants because that’s discrimination. So the Basque government has been forced to downgrade its own grants because they were better than in other parts of Spain.

‘When that is happening – when our government is forced to downgrade our standard of living because someone in Spain says so – we understand that there is going to be a response from Basque society. And that is what we are trying to articulate. We are not yet seeking a vote to happen, we are getting our people to work in that direction.’

Amalur Alvarez, spokeswoman of Gure Esku, a grassroots movement that works in favour of the right to Basque self-determination, says they are used to the Spanish state’s attempts to ‘apply judicial power to criminalise the exercise of fundamental rights and freedoms’, but that this ultimately ‘strengthens our purposes and beliefs’.

‘We are not afraid to exercise our rights and we won’t take a step back in that sense,’ Alvarez adds.

The struggle goes on

Indeed, the Basque Country has seen major mobilisations this year in support of the Catalans, in defence of the 47 and over the Altsasu incident, where eight young people involved in a bar fight with two off-duty Guardia Civil officers was described as a ‘terrorist attack’ by the public prosecutor, who called for sentences of between 12 and 62 years.

Gure Esku is thinking ahead, with plans in May 2020 for a mobilisation which will ‘visualise the support of the majority of Basque citizens’ for the right to self-determination. But it’s not just a question of getting the chance to vote in a referendum, Alvarez says.

‘The Basque and Catalan citizenship believe in a deeper democratic political culture,’ she explains. ‘We want to decide not just about our countries political future, but also about all issues that concerns our daily lives.’

Ben Wray is a freelance journalist currently based in Oñati, Basque Country. He is the co-author of What is Scottish Independence For? – to be published by Verso in 2020. Ben can be contacted via email at: ben.wray@hotmail.co.uk