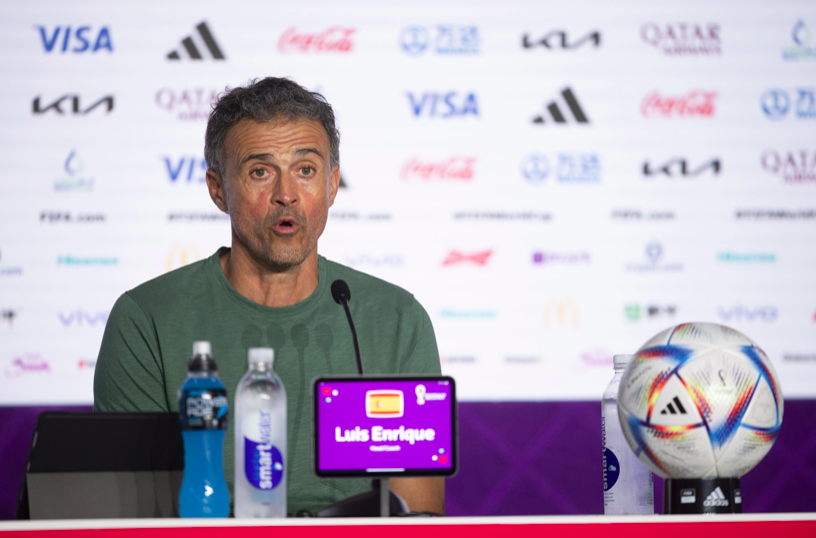 Spain’s national football coach Luis Enrique gave each of his players the ‘homework’ of practising 1,000 penalties ahead of the World Cup in Qatar, saying he is convinced they are not a lottery.

‘Over a year ago, in one of the Spain [training] camps, I told them they had to get here with at least 1,000 penalties taken,’ Enrique said on Monday, during a press conference.

‘I imagine that they have done their homework. If you wait until getting here to practise penalties … [then it won’t be enough].’

Spain beat Switzerland on penalties at last year’s Euro 2020 but were eliminated on spot-kicks by Italy in the semi-finals. The 2010 world champions face Morocco in the last 16 on Tuesday, with the threat of extra-time and penalties looming in the knockout phase of the tournament.

Enrique also insisted that penalty kicks were ‘not a lottery’.

‘It’s a moment of maximum tension, a time to show your nerve, and that you can shoot the penalty in the way you have decided, if you have trained it a thousand times,’ he said. ‘It says a lot about each player. It’s trainable, manageable, how you manage the tension. It’s increasingly less luck – the goalkeepers have more influence.’

Throughout the World Cup, the 52-year-old Enrique has been going out of his way to connect with fans and talk about varied and controversial subjects.

He surprised everyone when he announced before the World Cup that he would be doing some live streaming on Twitch during the tournament. His number of followers in the platform went from about 50,000 to more than 790,000 since his announcement.

‘Streamers of the world, move aside,’ he had said at the time. You can click here for Luis Enrique on Twitch.

It has been during his streams that the coach has talked openly about some provocative subjects.

He talked a few times about the relationship of his older daughter with Spain forward Ferran Torres, joking that he would drop the player from the squad immediately if he scored a goal and then celebrated in any way alluding to a baby.

The coach also delved into politics at one point, giving advice to local politicians and saying they should all leave their posts if they can’t fulfill at least half of their promises in the first year.

In another stream, he answered a fan’s question on whether he wore boxers or briefs, with: ‘I wear thongs! You don’t wear thongs?’ Then: ‘It’s a joke – if my wife sees this she will kill me.’

Enrique, who runs Ironman triathlons and has posted a few photos of himself shirtless and in good shape while in Qatar, has also talked about his diet, food preferences, dating sites and football concepts. He promised to get a piercing and dye his hair if Spain wins the World Cup.

The coach said he will eventually donate what he earns with his streams.

On his Instagram profile, he has posted images of his bicycle rides in Qatar, including one by the Lusail Stadium where the World Cup final will be played — saying, ‘hopefully we’ll be there’ to try to win the title.

It was in one of the posts of his bicycle rides that Enrique remembered his late daughter Xana Martínez, who died three years ago from a rare form of bone cancer. He sent her well wishes from his bike in Qatar the day she would have turned 13.

Later in a post-match news conference, he opened up about ‘the special day’ for him and his family.

‘Obviously we don’t have our daughter with us physically anymore, but she is still present every day,’ he said. ‘We remember her a lot, we laugh and think about how she would act in each situation that we experience.’

The former Barcelona player and coach temporarily left the national team after finding out about his daughter’s cancer.

In the press conference on Monday, Enrique also responded to criticism over the team’s style of play – their commitment to playing out from defence sometimes puts them under pressure in dangerous areas.

Japan earned a shock 2-1 win over Spain, with their first goal coming after Enrique’s players lost the ball on the edge of their box and Ritsu Doan slammed home.

‘Every team has their weapons,’ said Enrique. ‘We want to get the ball in the best way possible to the forwards.’

‘If we have to hit a long ball, we’ll hit it. The interpretation has to be done on the pitch.’

He said he did not agree with Spain’s critics.

‘It doesn’t make sense to say that against Japan if we hoofed it away to clear our lines we wouldn’t have let in the first goal,’ he said.

‘We also wouldn’t have scored any goals if we kept kicking it long. We will keep playing the ball out from the back, it’s what we want.’

Enrique confirmed that Cesar Azpilicueta had recovered from his knock against Japan and all 26 players would be fit to train on Monday evening ahead of the game.

ALSO READ: Spain lose 2-1 to Japan, but both teams progress to last 16 of World Cup.