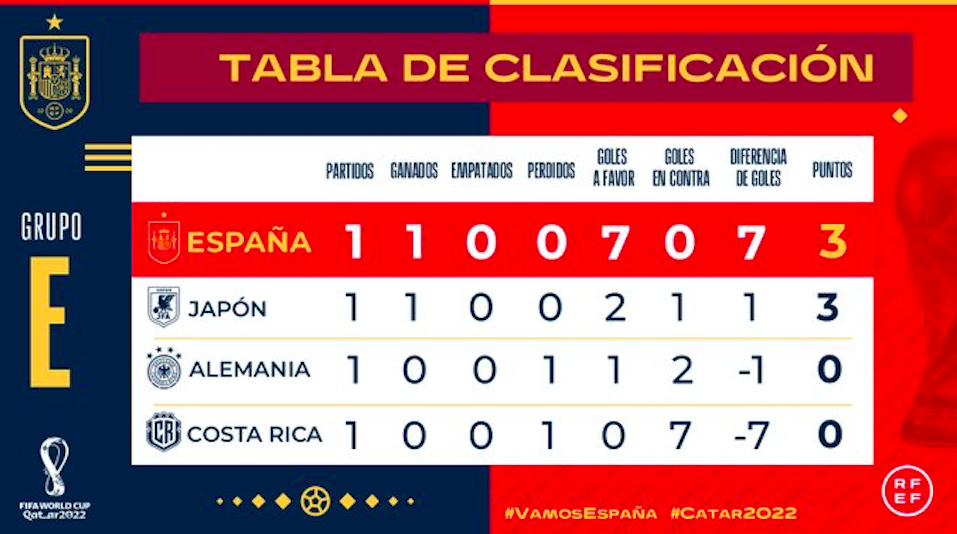 Spain thrashed Costa Rica 7-0 on Wednesday in their opening Group E match at the FIFA World Cup in Qatar, looking to repeat their triumph in the 2010 tournament.

It was the first time Spain scored seven goals in a World Cup match, and the first time a team completed 1,000 passes in a 90-minute game at the tournament.

The coach placed Asensio at false nine, flanked by Olmo and Torres, starting with Morata and Ansu Fati on the bench.

It took only 11 minutes for La Roja to open the scoring, with Gavi stabbing a pass forward for Olmo to receive in the area and the RB Leipzig winger taking one sublime touch to turn and another to stroke the ball gently past Keylor Navas.

Olmo’s goal was the 100th at World Cups for Spain, which became the sixth nation to score more than 100 times in the tournament.

Costa Rica, who surprised at the 2014 World Cup by beating Italy and Uruguay, and drawing with England to top their group, were sliced apart again for the second goal 10 minutes later.

Jordi Alba’s low drilled cross was rammed home by Real Madrid forward Asensio past his former team-mate Navas, who might have done more to keep it out.

Torres stroked home from the penalty spot after Alba was fouled by Oscar Duarte – a soft call on a hard night for Costa Rica, who were never in the game and failed to muster a shot at goal.

Barcelona forward Torres capitalised on more slack defending to fire the fourth past Navas early in the second half. The 22-year-old Torres is also dating the daughter of coach Luis Enrique.

Enrique was able to take off Pedri and Torres before the hour mark in order to rest them for Sunday’s clash with Germany, and handed teenage Barcelona left-back Alejandro Balde his debut.

The 19-year-old roared up the pitch in the build-up to Spain’s fifth goal, with substitute Morata crossing for Gavi to drill home.

Not since Pelé in 1958 had someone as young as Gavi scored a goal at the World Cup. Pelé scored two goals in the 1958 final, when Brazil won its first World Cup by beating Sweden 5-2.

‘I could never have imagined it,’ said Gavi, who was named the game’s most valuable player. ‘I know I’m the youngest in the team and I respect everyone, but on the field it’s different and I bring out my best.’

Soler and Morata then got in on the act with stoppage-time strikes to pile further misery on Costa Rica and help Spain flex their muscles in a perfect opening match in Qatar.

Spain didn’t get past the round of 16 at the World Cup in Russia, and is trying to break through with a major title after making it to the final of the Nations League and the semi-finals of last year’s European Championship. This year the team also qualified for the Final Four of the Nations League for a second straight time. Spain’s last major triumph came at Euro 2012, after it won its first World Cup title in 2010 in South Africa.

Japan beat Germany 2-1 in the other Group E match on Wednesday. Spain play Germany at 8pm on Sunday 27 November.