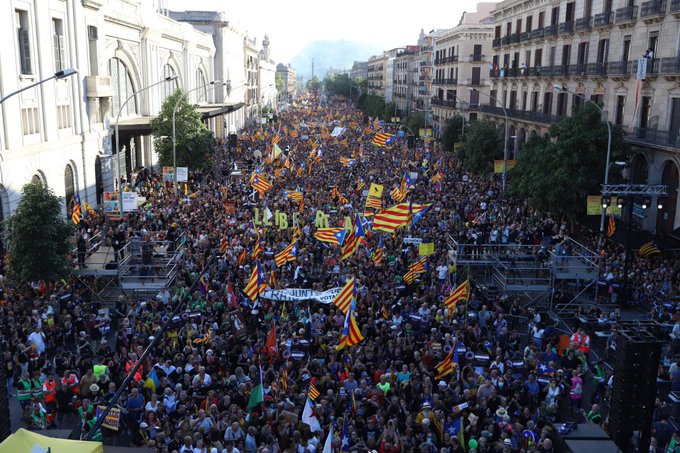 While the local police in Barcelona calculated that 150,000 people attended a mass pro-independence rally in the city on Sunday, coinciding with ‘La Diada’ (the national day of Catalonia), the organisers claimed that 700,000 participated.

There were certainly more people participating than last year, which was still affected by some Covid restrictions. The local police estimated that 108,000 had participated in 2021, and the organisers had claimed 400,000. The estimated attendance figures on Sunday remain far from the rallies in the mid-2010s, however, with up to 1.8 million people taking to the streets.

This year’s rally took place amid political in-fighting between Catalonia’s main pro-independence parties, the Esquerra Republicana (ERC) and Junts per Catalunya (JxCat), with the organisers of the march, the civil association of the Catalan National Assembly (ANC), trying to reignite the independence movement as it nears the five-year anniversary of its failed breakaway bid from Spain.

Nine Catalan politicians and activists were eventually jailed for between 9-13 years by the Spanish Supreme Court in October 2019, convicted of sedition and misuse of funds – with the verdicts causing widespread protests across Catalonia. In June 2021, the nine walked free from prison, following the pardons granted by the current PSOE–Podemos coalition government led by Pedro Sánchez. Puigdemont remains in self-imposed exile in Belgium and is now an MEP.

The unity between the pro-independence political parties and the civil societies that led the October 2017 independence push, however, which received no international support and was quickly quashed, is in danger of falling apart due to conflicting views on how to go forward.

The ANC is strongly opposed to the talks that the Catalan government is holding with Spain’s central government in Madrid. The influential organisation says it has lost faith in political parties and is ready to move on without them toward a new attempt at breaking with Spain.

That led Pere Aragonès of the ERC party, to become the first Catalan president to not attend the annual march on Sunday, claiming that the event ‘is against [pro-independence] parties and not against Spain’.

Aragonès did participate in other events during the national day, but other members of his ERC party endured jeers of ‘Traitors!’ from spectators when they made the traditional offering of flowers at a monument in Barcelona.

Aragonès defends the talks with the government of Sánchez as vital. He insists that he won’t renounce his pledge to hold another referendum on independence, but said the talks are crucial to finding solutions for the dozens of Catalans in legal trouble for their role in the 2017 referendum. The talks coincided with the pardons granted in June 2021.

After years of extreme tension and protests that turned violent during 2019, many Catalans, especially the roughly half who want to remain part of Spain, are also relieved that there is a dialogue with central government.

Catalan pro-independence parties won 52% of the vote last year and maintained their hold on the regional parliament, but there are clear divisions between the parties regarding any possible route towards independence. The junior partner of the government, Junts per Catalunya (JxCat), did take part in the rally on Sunday, and shares the ANC’s skepticism of the talks with Madrid. Its leadership has publicly talked about leaving the government unless there is a stronger plan of action to force independence.

Amid a sea of pro-independence flags on Sunday in central Barcelona, some marchers carried signs demanding Catalan authorities either make a ‘Declaration of Independence or Resign’.

Dolors Feliu, the president of ANC, said that she hoped Sunday’s rally will serve as a wake-up call for Aragonès to cease negotiations with the central government.

Feliu has demanded ‘independence or elections’ to the two parties in cabinet, and during her speech she hinted at the creation of a new party.

‘The people of Catalonia, firm and persistent, have once again shown that we are capable of everything and more,’ the ANC tweeted on Sunday. ‘Today 700,000 have made history. We flooded the capital of the future Catalan Republic. We will never fail. Until independence!’

Filming of Netflix ‘The Crown’ in Barcelona suspended ‘out of respect’