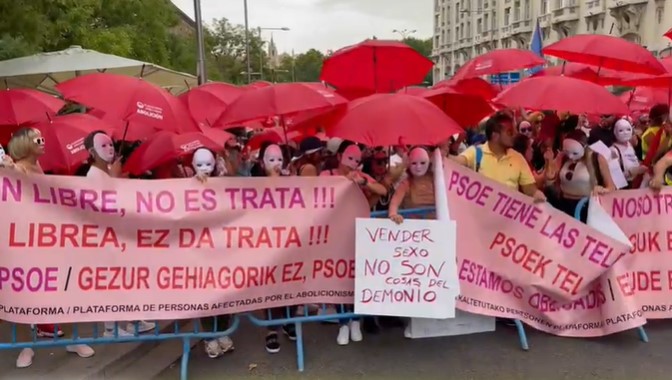 Protesters including brothel owners and sex workers demonstrated on Monday in front of the Spanish Congress in Madrid, over a bill that would penalise prostitution customers, sex club owners or pimps with sentences up to six years in prison.

The proposed bill aims to crack down on the practice of prostitution by targeting people who financially exploit prostitutes, as well as those who buy their services. It is a controversial initiative that has split the women’s rights movement. ALSO READ: Spanish MPs vote to draw up legislation with the aim of ending prostitution.

Prostitution is currently legal but greatly unregulated in Spain, although sexual exploitation and pimping are illegal. Many brothels operate as hotels or other lodging establishments.

The bill backed by the governing coalition’s main PSOE socialist party proposes broadening the definition of pimping, not making the exploitation of a prostitute necessary but a mere trade relation. For the first time in Spain, it would also penalise customers.

‘We ask the socialist party to withdraw the bill, that implies an actual abolition of prostitution and condemns us to work underground,’ said Susana Pastor, the president of the Platform against Abolition.

But the new sex worker union Otras didn’t back Monday’s protest because sex club owners arranged it. Other groups, including some feminists, oppose normalising prostitution as a regulated trade.

Both Otras and the sex business owners deny the government’s data that says 90% of the sex work in Spain is forced. Police say 491 victims of trafficking and sexual exploitation were rescued in Spain in 2021.

On a European level, the European Parliament estimates there are up to 180,000 trafficking victims exploited in prostitution and the industry generates 10.8 billion euros a year in the bloc.

Spain is considered to have one of the laxest legal frameworks for prostitution in Europe, only punishing when exploitation or abuse can be proven.

The proposed bill would not make prostitution illegal but proposes prison terms of between three and six years, as well as fines, for pimps or procurers. It also proposes penalising those who make money by knowingly providing premises or apartments for the practice of prostitution, and fines for those who pay for prostitutes.

The bill would see sex workers themselves treated as victims, to be protected rather than criminalised, as they would be under any outright ban on prostitution. It still needs to pass through parliament.

Amid political in-fighting, Catalan independence takes to the streets again for ‘La Diada’