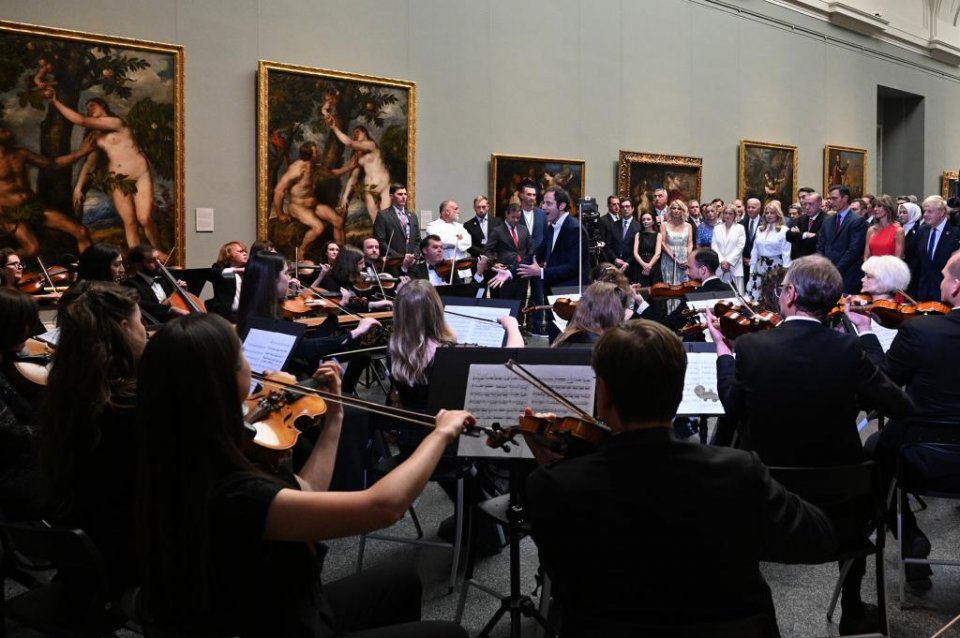 NATO leaders and other heads of state were able to enjoy some of the world’s greatest art and listen to a Ukrainian symphony orchestra live as they gathered for dinner at Madrid’s Prado Museum on Wednesday evening.

The dinner, prepared by the renowned Spanish-US chef, José Andrés, was preceded by a live performance by the Kyiv Symphony Orchestra, which has been in exile because of the Russian war.

Hosted by Spanish Prime Minister Pedro Sánchez along with his wife, Begoña Gómez, many other leaders also attended with their wives or husbands, with the US President Joe Biden and First Lady Jill Biden attending with their two granddaughters.

The mayor of the Ukrainian city of Kyiv, Vitali Klitschko, was also there, together with his brother.

The group posed for a family photograph on either side of Diego Velazquez’s Las Meninas, the museum’s crown jewel, before sitting down to eat in the Jerónimo’s Cloister annex.

The menu included a dessert of strawberries from the Spanish city of Cuenca dressed in anis, violet caramel and with a typical Madrid ‘barquillo’ finger wafer biscuit.

The first course included cod with orange and beetroot, along with a lobster-based cold soup with a fragrance of Spanish olive oil and basil. The main course was slow-roasted lamb with lemon puree.

Celebrity chef José Andrés is the founder of the organisation World Central Kitchen (WCK), which, according to its own information, provides victims of natural disasters worldwide with healthy food.

After the Russian invasion of Ukraine, his organisation has given out thousands of portions of hot food to Ukrainian refugees on the Polish border.

On the last day of the NATO summit on Thursday, the focus was to be on the fight against terrorism.