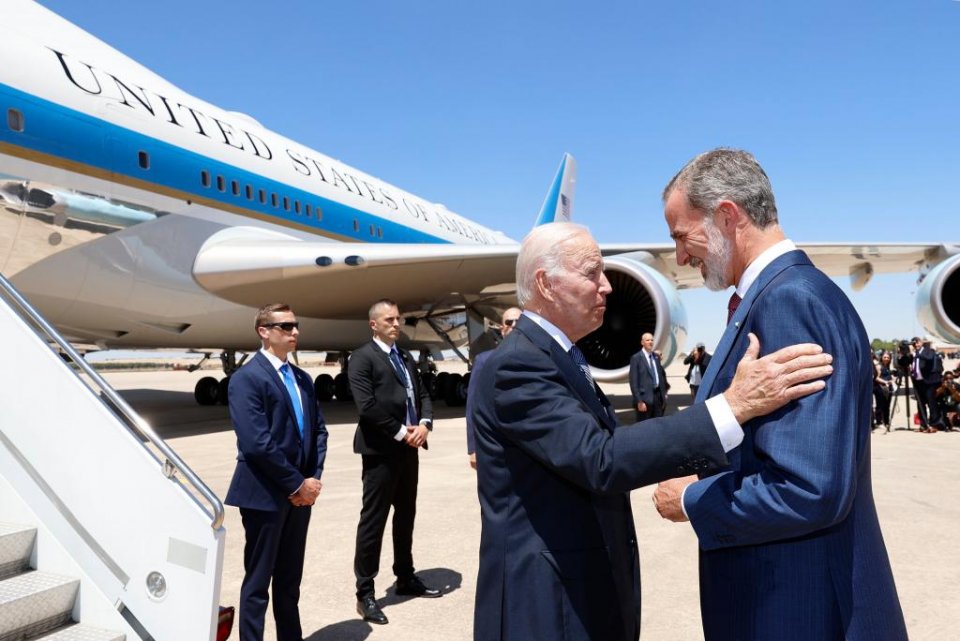 Madrid has been turned into a high-security zone ahead of the NATO summit this week, with thousands of police guarding venues where over 40 world leaders will gather during Wednesday 29 and Thursday 30 June. The summit itself kicks off on Tuesday evening.

US President Joe Biden arrived in Madrid on Tuesday early afternoon, and was greeted at the Torrejón military base by Spain’s King Felipe VI. Spanish Defence Minister Margarita Robles and Foreign Minister José Manuel Albares were also there to greet the US president.

Called ‘Operation Eirene’, after the ancient Greek Goddess of peace, a total of 10,000 agents backed by sniffer dogs and helicopters have been deployed to provide security for the 5,000 delegates attending the summit. Fighter jets and anti-aircraft artillery devices have also been placed on high alert to protect Spanish airspace.

The massive security operation involves the biggest deployment of forces in ‘Spain’s recent history’, according to the government.

‘Madrid and Spain will be the centre of the world,’ Albares said on Antena 3 TV.

On Tuesday, police on foot and on horseback patrolled the streets of Madrid, which were monitored by police helicopters and drones.

The tightest security was around the IFEMA conference centre in the northeast of the capital, where the summit will take place. Roads leading to the conference centre were cut off and the nearest metro stations was closed.

Access to the hotels where delegations are staying was also restricted. To avoid gridlock in the city of over three million, local authorities strongly recommended that people work from home if possible.

Madrid’s Prado Museum, which will host a gala dinner on Wednesday evening, will be closed to the public for two days. The capital’s imposing central square, the Plaza Mayor, will also be closed from Tuesday afternoon and used as parking space for the delegate’s vehicles.

Ahead of the arrival of the US president, the First Lady Jill Biden arrived in Madrid on Sunday, meeting with Queen Letizia at the Palacio de la Zarzuela on Monday. They later toured the headquarters of the Spanish Association Against Cancer.

The first lady is an advocate for research into a cancer cure. She lost her adult son, Beau, to brain cancer in 2015. Several of her friends also succumbed to breast cancer.

The first lady also met with Begoña Gómez, the wife of Spanish Prime Minister Pedro Sánchez. On Tuesday, Jill Biden and Letizia went to a welcome centre in Madrid for Ukrainian refugees taken in by Spain and met with Ukrainian families in Madrid.

No country can beat cancer alone.@TheNCI and @ContraCancerEs are leading examples of the type of international collaborations we need to build a future where the word “cancer” forever loses its power. pic.twitter.com/pHHetkrCeh

With the main focus of the summit being the Russian invasion of Ukraine, speaking to reporters on Tuesday NATO Secretary General Jens Stoltenberg said that NATO will enhance its battlegroups in the eastern part of the alliance up to ‘brigade levels’.  Allied heads of state and government will also approve plans to enhance NATO high-readiness forces to more than 300,000 troops, with forces pre-assigned to specific locations. More heavy weapons, logistics and command-and control assets will also be pre-positioned.

In Madrid, the NATO allies will also approve a new Strategic Concept, setting out the Alliance’s priorities and approaches for the next decade. The document is expected to make clear that the allies consider Russia as the most significant and direct threat to NATO”s security, while also addressing China for the first time and the challenges that Beijing poses toward allied security, interests and values.

The summit will also decide on a more comprehensive assistance package for Ukraine. Looking to the future, leaders will take decisions to launch a one-billion-euro Innovation Fund to invest in emerging technologies. On climate change, the allies will agree to cut greenhouse gas emissions for NATO as an organisation. The leaders of Georgia, Australia, New Zealand, Japan and South Korea, and Ukrainian president Zelensky via video link will also join the Summit.

On Tuesday afternoon, NATO Secretary General Stoltenberg was hosting Turkey’s President Erdoğan, as well as President Niinisto and Prime Minister Andersson to discuss how to make progress on the NATO application of Finland and Sweden.