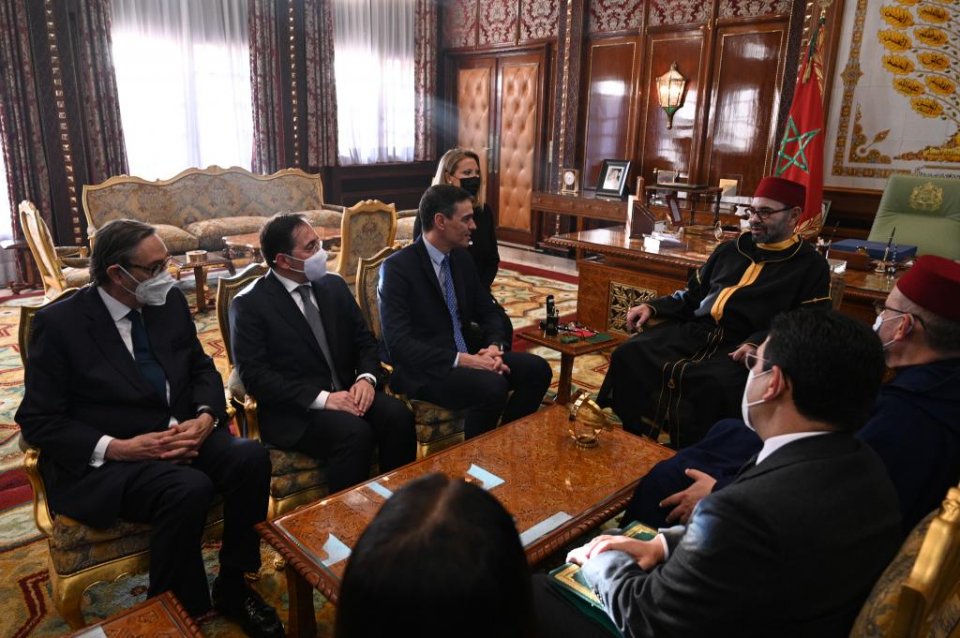 Spanish Prime Minister Pedro Sánchez travelled to Rabat on Thursday to meet with Moroccan King Mohammed VI in a landmark visit ending a year-long diplomatic crisis, after Madrid reversed decades of neutrality on the Western Sahara conflict in a U-turn that has angered Algeria.

‘We are embarking on a new chapter in our long shared history, which should enable us to face the challenges but also the many opportunities of the future with confidence: a true partnership for the 21st century,’ Sánchez stressed.

‘We face this new stage in the relationship between Spain and Morocco with hope and responsibility, as it will contribute in a specific way to guaranteeing the interests, stability and integrity of our countries,’ he added.

The Spanish prime minister and his Foreign Minister José Manuel Albares were given a red carpet reception at Rabat airport before heading for discussions with the king followed by iftar – the evening meal in the Muslim holy month of Ramadan.

Whilst the visit aims to draw a line under a major stand-off between the two countries, Spain dropping its long-held neutrality on the Western Sahara has also sparked a domestic backlash, with the Spanish Congress on Thursday condemning the move in a motion presented by the government’s coalition partner, Podemos.

The diplomatic crisis began a year ago when Madrid allowed Brahim Ghali, leader of the Polisario Front which seeks independence for the territory of Western Sahara, to be treated for Covid in a Spanish hospital.

Morocco, which accuses Ghali of war crimes, sees the Western Sahara as an integral part of the kingdom and a highly sensitive issue of security and national pride.

For Morocco, the question of Western Sahara is the top priority, and the country fought a bitter war with the Polisario after Spanish colonial forces withdrew in 1975. Rabat controls 80% of Western Sahara, which the UN considers a ‘non-autonomous territory’.

The Polisario agreed a ceasefire in 1991 on the promise of a referendum on self-determination. But it has since claimed regular, sometimes deadly attacks on Moroccan forces after declaring the ceasefire null and void in November 2020.

Weeks after Ghali’s hospitalisation, more than 10,000 migrants surged into Spain’s tiny North African enclave of Ceuta as Moroccan border forces looked the other way, in an incident seen as meant to punish Madrid.

On 18 March, Madrid announced a ‘new stage’ in relations and said it now backed the North African kingdom’s plan for the territory: limited autonomy under Moroccan sovereignty.

Addressing journalists after his meal with the king on Thursday, Sánchez hailed the ‘historic moment’. He said they had agreed ‘a clear roadmap that allows the management of matters of interest in a concerted manner, in a spirit of normality and good neighbourliness, without room for unilateral acts’.

He also said the countries would work to restore normal border traffic between Morocco and Ceuta as well as the nearby Spanish enclave of Melilla.

Spain’s move, widely seen as a victory for Morocco, has infuriated its regional rival Algeria, which has long backed the Polisario and also supplies vast quantities of natural gas to Spain.

Algiers last month recalled its ambassador from Madrid in protest at the decision, and state-owned energy giant Sonatrach warned Friday it could increase the price of its gas sales to the country. ALSO READ: Spain’s ‘abrupt U-turn’ on Western Sahara sends ambassadors in and out.

Sánchez has also faced a domestic backlash over the move.

The Spanish Congress denounced his reversal of a ‘historic’ position, in a motion put forward by Podemos. The move ‘amounts de facto to supporting the path proposed by Morocco by abandoning the basis for a mutually acceptable political solution’, said the motion, passed by 168 MPs.

Sánchez has defended the move by saying the crisis with Morocco had to be solved.

In a statement Thursday evening, the Moroccan royal palace said the two men had ‘reaffirmed their desire to open a new phase in relations between the two countries, based on mutual respect and trust, on-going consultation and honest cooperation’.

Key questions include irregular migration and smuggling around Ceuta and Melilla, two Spanish enclaves which sit on Morocco’s Mediterranean coast.

For Spain, the principal aim of mending fences was to guarantee Morocco’s cooperation on irregular migration – which, observers say, Rabat has often used to put pressure on Madrid.

ALSO READ: Opinion: Why are migrants coming into Ceuta now?

Barcelona seeks to ban smoking on all beaches, after positive pilot scheme