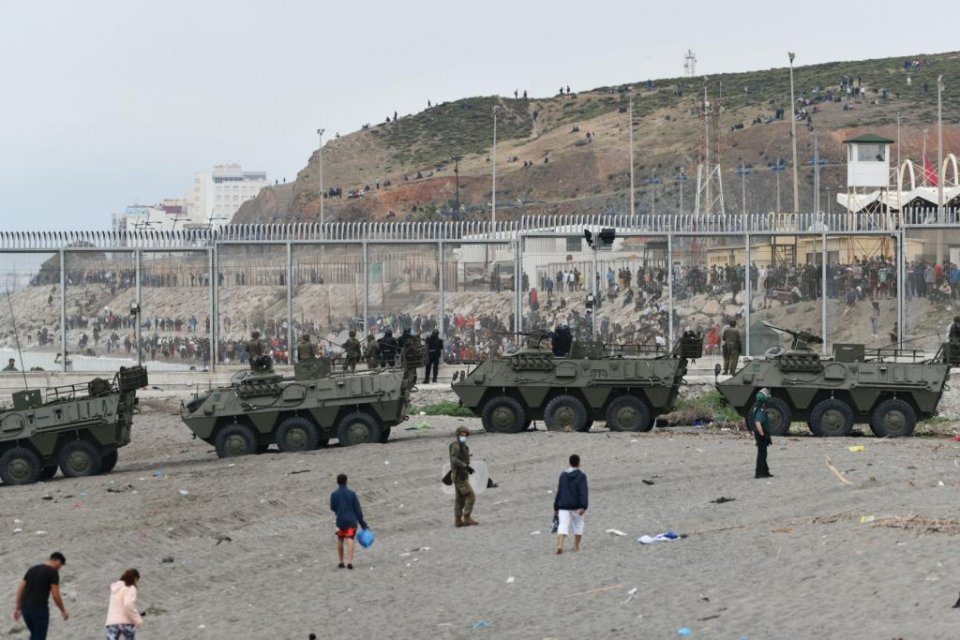 Over 8,000 migrants have arrived in the last 48 hours in the Spanish Ceuta enclave, off the coast of Africa, with border police struggling to deal with the situation.

Spanish authorities are having to react quickly to avoid both a humanitarian and diplomatic crisis, that has arisen after a number of mainly Moroccans fled their country to seek new lives on European soil.

It is understood that one person has died during their attempt to flee, and that about 1,500 of the crowd were minors. Most were young men, along with several families, and some had used inflatable rings and rubber dinghies to help in their journeys.

The 200 troops, and additional police, will support the 1,100 border police who are stationed to protect the enclave, that has been a popular destination with African migrants seeking entry to Europe, along with the Melilla enclave located 350 kilometres east on the Moroccan coast.

Spain’s Prime Minister, Pedro Sánchez, has today cancelled a trip to Paris, where he was due to attend a French-led summit on financial aid for Africa.

He said that the Ceuta crisis required urgent action and ‘maximum firmness’ to take control of the situation.

The footage of crowds arriving at Ceuta showed people swimming onto the beach, with some running and holding thumbs up with relief at reaching land at the enclave.

Spanish authorities acted swiftly, with Spain’s Foreign Minister, Arancha González Laya, saying that some of the migrants had already been sent back to Morocco and that Spain will ‘keep a cool head’ whilst dealing with the situation.

Ceuta’s President, Juan Jesús Vivas, told Cadena SER radio that the numbers arriving were high, saying ‘the army is in the border in a deterrent role, but there are great quantities of people on the Moroccan side waiting to enter’.

He went on to say that local residents of Ceuta were feeling ‘anguish, concern and fear’ about the situation.

The migrants arriving at Ceuta will add to the on-going tension between Spain and Morocco, relating to the treatment in a Spanish hospital of Brahim Ghali, leader of the Polisario Front, a militant organisation that is fighting for the independence of Western Sahara.

Morocco’s foreign minister last month issued a statement about the treatment of Ghali in Spain, saying that they strongly disapproved of the decision to admit him under a false identity without informing Morocco.

Spain’s government has quashed claims that the tensions between the countries is escalating, stating that the issues are separate and unconnected.

The on-going situation at both Ceuta and Melilla will be a focus for Spanish authorities to control migration of Africans, many of whom see the enclaves as an entry point to Europe.

In 2020, 2,228 migrants crossed into the enclaves by sea or land, often in dangerous circumstances and at risk of injury or death.

The number of migrants was fewer than the peak of 2019, when 7,899 attempted the journey, according to Spain’s Interior Ministry.

ALSO READ: Why are migrants coming into Ceuta now?

Registrations for nightlife clinical trial now closed, with over 500 applications