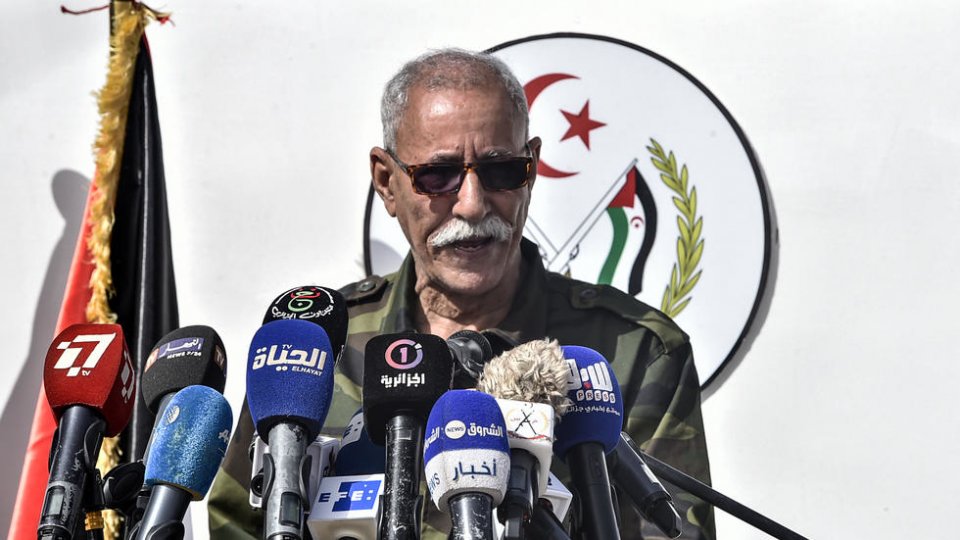 Brahim Ghali, leader of a movement seeking independence from Morocco and who is at the centre of a diplomatic row between Rabat and Madrid, flew out of Spain to Algeria on Tuesday night, his group said – soon after testifying via video conference in a court hearing in Madrid (see original report below).

Ghali, 71, was released from a hospital in northern Spain following more than six weeks of treatment after contracting Covid-19.

Ghali departed Spain hours after testifying via videoconference in a Spanish investigation into allegations against him of torture, genocide and other crimes (see below). A Spanish magistrate ruled after Ghali’s testimony that he should remain free while the investigation continues. Ghali flew out of Pamplona airport overnight and will continue his recovery in Algeria, according to a statement from his group,

A Spanish investigating magistrate today questioned in court Brahim Ghali, leader of the Algeria-backed Polisario Front, about two allegations relating to war crimes. Both allegations were denied by Ghali.

The closed-door hearing at Spain’s National Court in Madrid listened to statements from 71 year old Ghali, who testified by video conference from a hospital in Logroño in northern Spain, where he is recovering from a severe case of Covid.

After listening to Ghali’s testimony, the magistrate has ruled that he should remain free while the investigation continues. After further preliminary investigations, the judge will then decide whether there is enough evidence to bring charges.

Relations between Spain and Morocco are already strained, given Ghali’s continued treatment in a Spanish hospital and the recent influx of Moroccan migrants at the Spanish enclave of Ceuta, when border guards allegedly did little to prevent over 7,000 Moroccans from attempting to cross the border into Spanish territory.

It was widely interpreted that the attempted influx of migrants during this incident was a direct retaliation for Spain’s decision to treat Ghali in a Spanish hospital.

Spain and Morocco had been cooperating in efforts to fight terrorism, drug smuggling and migration into Europe, but when Ghali checked into a Spanish hospital under a false identity in April, arriving by plane with an Algerian diplomatic passport and with the consent of the Spanish government, Moroccan government officials were infuriated.

Rabat has subsequently withdrawn its ambassador to Madrid and threatened not to replace the position if Ghali leaves Spain under similar protection and without answering the allegations that he committed crimes.

The Polisario Front headed by Ghali has fought for many years for the independence of Western Sahara, a desert region which was a Spanish territory until 1975. Today, Morocco controls 80% of the territory, with the rest run by the Polisario Front. ALSO READ: Opinion: Why are migrants coming into Ceuta now?

The first allegation against Ghali relates to the torture at Saharwi refugee camps in Tindouf, a town in western Algeria.

The second allegation accuses Ghali of genocide, murder, terrorism, torture and disappearances in 2007 by the Saharwi Association for the Defence of Human Rights (ASASEDH), based in Spain.

Ghali’s lawyer, Manuel Ollé, said that his client denies the charges and that he believes these have been brought about by Moroccan efforts to harm the reputation of the Polisario Front.

Morocco has warned the Spanish government that allowing Ghali to ‘go home, by pass Spanish justice and ignore the victims’ would exacerbate relations between the two countries.

Morocco considers Ghali a war criminal and its Foreign Ministry has warned that the crisis over his presence in Spain would ‘not be resolved by a single court hearing’.

A statement issued by Morocco’s Foreign Ministry questioned the motives of Spain in its actions with dealing with Ghali, saying ‘this issue has exposed the hostile attitudes and harmful strategies of Spain regarding the Moroccan Sahara issue and revealed the collusion of our northern neighbour with the kingdom’s enemies to undermine the territorial integrity of Morocco’.

The statement went on to compare with Madrid’s dealings with the on-going efforts of pro-indepence Catalans, asking how Spain would have reacted ‘if a figure of Spanish separatism had been received at the Royal Moroccan Palace’.

During the hearing, Ghali has confirmed an address and contact number in Spain where he can be reached as investigations continue.

ALSO READ: Opinion: Why are migrants coming into Ceuta now?