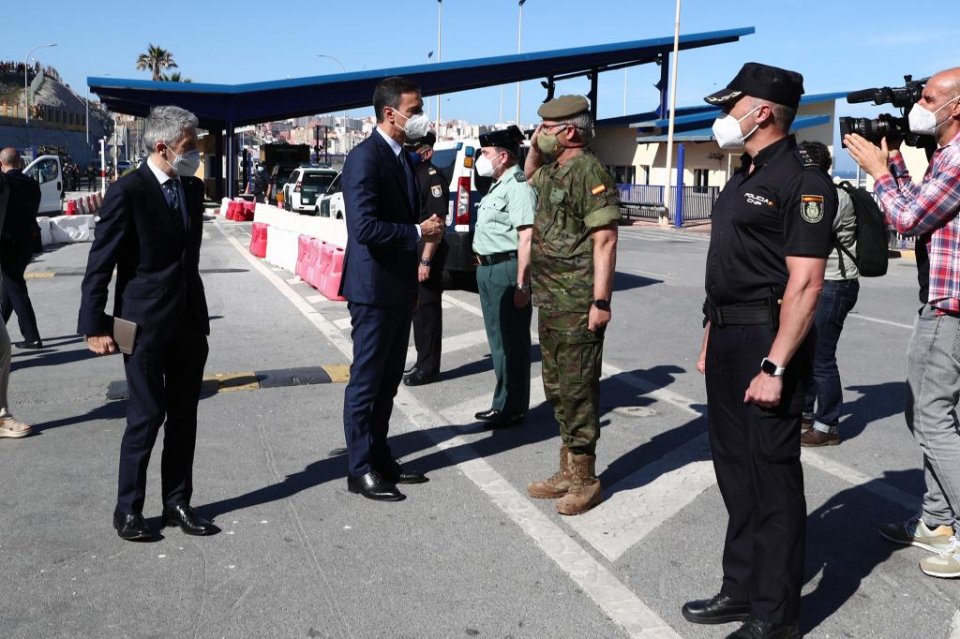 So often in life we need to study history to be able to understand the present. The pictures circulating on the news and in social media this week showing thousands of migrants getting into the North-African Spanish enclave of Ceuta might seem like any other migratory influx, but if we look a bit closer and unpeel the layers of history we find out just what is really behind the current surge of immigrants, who to my ESO and Bachillerato students this week were, sadly, just another load of **** Moros after Spanish jobs.

I felt it only my duty to explain to the youngsters the reasons why suddenly so many migrants have made the journey, and I couldn’t miss the irony of me, the guiri teacher explaining their own history to the young Spaniards.

So, getting back on topic, why has Ceuta seen a sudden surge in immigrants this week? To answer this question we need to go back to 1885 when the main European nations were dividing up parts of Africa, and Spain declared ‘a protectorate’ in the area on the north-west coast of Africa, from Cape Blanc to Cape Bojador. To put it into some sort of geographical perspective, the territory is just 364 miles east of the Canary Islands. The area along the coast is rich in minerals, fishing and also has useful access to the sea, all of which make it an interesting prospect to any ambitious neighbouring country.

The period of Spanish occupation was far from trouble free, with rebellions from the native people in 1904 and 1910 as well as various political uprisings.

After Morocco gained independence from France in 1956 they too laid claim to the area now known as Spanish Sahara or Western Sahara, saying that it was part of its pre-colonial territory, although there is doubt as to the accuracy of these claims.

In 1957 Spain had to send troops from the Canary Islands to put down a Moroccan uprising in Ifni, just north of Spanish Sahara, and during the 1960s Morocco continued to demand the territory and was backed by the United Nations decolonisation policies. In 1973 the Polisario Front was formed in a revival of militant Saharawi nationalism. The guerrilla front grew rapidly and Spain gradually lost control over the territory.

In November 1975, as Franco lay on his deathbed, some 350,000 Moroccans marched into Western Sahara in a campaign that became known as the Marcha Verde. And to this day Morocco continues to control the area. Mauritania joined with Morocco at the start but after a few years gave up their claim to the territory.

The Polisario Front fought against their Moroccan occupiers for 16 years, until the UN negotiated a ceasefire in 1991. Today the United Nations and more than 80 governments recognise the area as the, albeit occupied, sovereign state of the Saharwi Arab Democratic Republic (SADR), whose government, backed by the Polisario Front, is in exile.

The UN has tried to organise a referendum on the future of the area but this has never come to fruition as there is too much disagreement over who can vote in it.

If you’ve read this far, thank you, and well done, but you might be wondering what all this has to do with this week’s migrants into Ceuta.

So, returning to 2021, most of the time the border around the two Spanish enclaves in North Africa, Ceuta and Melilla, are patrolled by guards on both sides to stop a flood of migrants into Europe. However, this week it seems the Moroccans have decided to turn a blind eye to those trying to get through, in fact there were even reports that they had even encouraged young Africans to try their luck.

But why would Morocco do this? What had riled them so much that they would risk upsetting Spain and the EU?

Currently, the leader of the Polisario Front, Brahim Ghali is being treated in hospital for Covid-19 in Spain. He was transported under a different name and Morocco was not informed.

Spain, of course says the two events are not related, but now we know the long history between the two countries, it seems a bit of a coincidence that so soon after action which Morocco sees as an affront, they open the flood gates to thousands of migrants.

The term “migrant” is fascinating. The verb is to migrate and means to come and go regularly – with the seasons – from one habit to another especially in different countries. An example: the swallow is a migratory insect eating bird. Also applied to workers who go to an area to work and then return home. All of this from an English encyclopedic dictionary published in 1986. Now it seems to refer to those who wish to settle in another country without receiving the required permission. Back in 1886 known as illegal immigrants. Fascinating change in meaning!!!