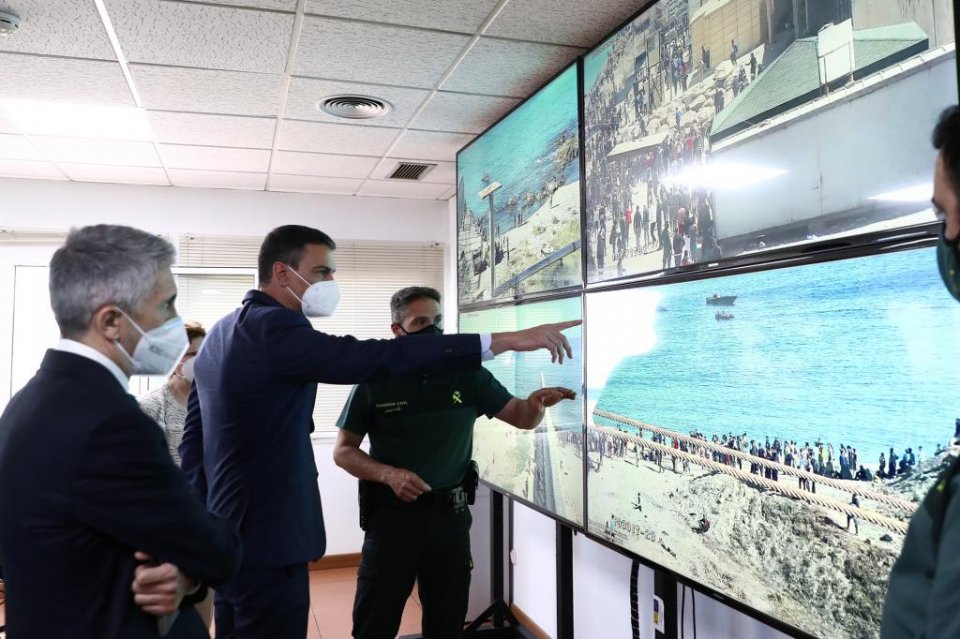 Spain has continued to deal with the influx of migrants at the Ceuta enclave on the north African coast, stepping up efforts by expelling over half of the 8,000 who crossed from Morocco earlier this week.

Prime Minister Pedro Sánchez, who flew into Ceuta on Tuesday, said that up to 4,800 of those who had entered the enclave had been sent back, as troops continued to prevent any further migrants crossing into the Spanish territory. Latest reports on Wednesday from Spain’s Interior Ministry said that 5,600 have now been sent back.

Vowing to ‘restore order’ in the enclave, Sánchez said that ‘this sudden arrival of illegal migrants poses a serious crisis for Spain and for Europe’.

Ceuta and Melilla, another enclave further east on the Moroccan coast, are the only EU land borders with Africa, and both are popular entry points with people fleeing poverty and war in Africa.

Most of those travelling into Ceuta on Monday and Tuesday were allegedly unimpeded by Moroccan border police, but reinforcements were deployed to deal with the situation and to disperse those attempting to cross the border.

Over 200 Spanish troops and police arrived in Ceuta to support efforts to gain control of the situation. [Also read: Spain sends in troops after 8,000 migrants enter Cueta enclave from Morocco]

A number of the migrants who made the journey were detained by Spanish police before being sent back to Morocco. On Wednesday morning, troops were still escorting swimmers back to Morocco and away from the border fence.

However, there were a number of those fleeing who were unaccompanied minors and had to be taken into care by authorities, as required under Spanish law.

A Red Cross spokeswoman said that ‘we have never seen such an arrival of this magnitude’. On Tuesday, Spain’s Guardia Civil tweeted photos of agents helping ‘to save the lives of dozens of minors who came to Ceuta by sea with their families’.

Spanish authorities were critical of some of the efforts to control the situation by Morocco, with Sánchez saying that ‘the lack of border control by Morocco is not a show of disrespect of Spain, but rather for the European Union’.

The situation has increased tensions between Spain and Morocco, that had heightened last month when it emerged that Brahim Ghali, leader of the Polisario Front, a militant organisation that is fighting for the independence of Western Sahara was being treated in a Spanish hospital.

Morocco’s foreign minister issued a statement about the treatment of Ghali in Spain, saying that they strongly disapproved of the decision to admit him under a false identity without informing Morocco.

The events of the last few days have prompted comments from Mostapha Ramid, a Moroccan official and minister for human rights, saying in a Facebook post that Spain’s treatment of the Polisario leader was ‘reckless, irresponsible and totally unacceptable’.

Spain’s government has quashed claims that the tensions between the countries is escalating, stating that the issues are separate and unconnected.

Sánchez stressed this, by calling the north African nation a friend of Spain, while the Interior Ministry praised Morocco’s cooperation over re-admitting the migrants.

In a continued effort to ease tensions, Foreign Minister Arancha González Laya said on Wednesday morning in a radio interview that Spain has always been ‘exquisitely prudent’ regarding Western Sahara and that it never intended to give Ghali’s hospitalisation ‘an aggressive character’.

ALSO READ: Why are migrants coming into Ceuta now?

Plans for a logistics hub to distribute merchandise with electric vehicles