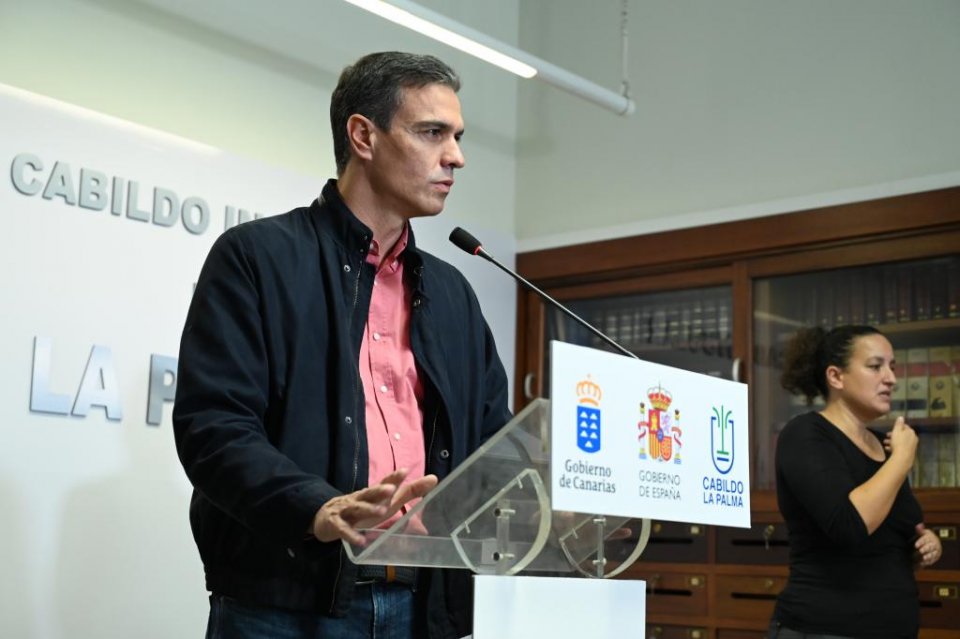 Spanish Prime Minister Pedro Sánchez announced on Saturday that his government is to speed up the already promised financial aid to help thousands of residents on La Palma in the Canary Islands, whose homes and livelihoods have been destroyed by the Cumbre Vieja volcanic eruption.

On his fifth visit to the island since the volcano started to erupt on 19 September, Sánchez said that his government would pass new measures this week to help millions of euros in aid to reach those in need.

‘The cabinet will approve this budgetary modification to further accelerate the arrival of the economic resources destined to La Palma,’ said Sánchez during his visit to the island on Saturday.

‘I want to convey to the citizens of La Palma all our empathy,’ said Sánchez. ‘We will dedicate ourselves to the task of reconstruction while the emergency lasts and also when the lava is over. The government of Spain is today and will be with La Palma every day to give the best future to this island.’

Lava flows from the eruption on the Cumbre Vieja volcanic ridge have now damaged or destroyed more than 2,100 buildings, mostly houses and farms. The molten rock, which has now covered over 850 hectares, has also destroyed irrigations systems and blocked roads in the largely agricultural area.

Although most of the island of 85,000 people is unaffected by the volcanic eruption, part of the western side is facing an uncertain future.

The lava flows are still going strong over a month later, forming new land where it has reached the sea, whilst locals are also feeling the toll of the non-stop roar from the volcano and the constant series of low-level earthquakes under their island.

Around 7,500 residents have been evacuated from their homes, in prompt action by the authorities that has prevented the loss of any lives. Most have taken refuge with family or friends but around 430 people are in temporary lodgings provided by the local government.

The Canary Islands government is buying up empty apartments to house those whose homes have been demolished. It has also pledged to modify regulations to help rebuilding efforts once the eruption finally stops.

‘We still have weeks ahead of us,’ he said. ‘We are living through some very difficult times … [but] no resident of La Palma will have to leave the island to continue their lives.’