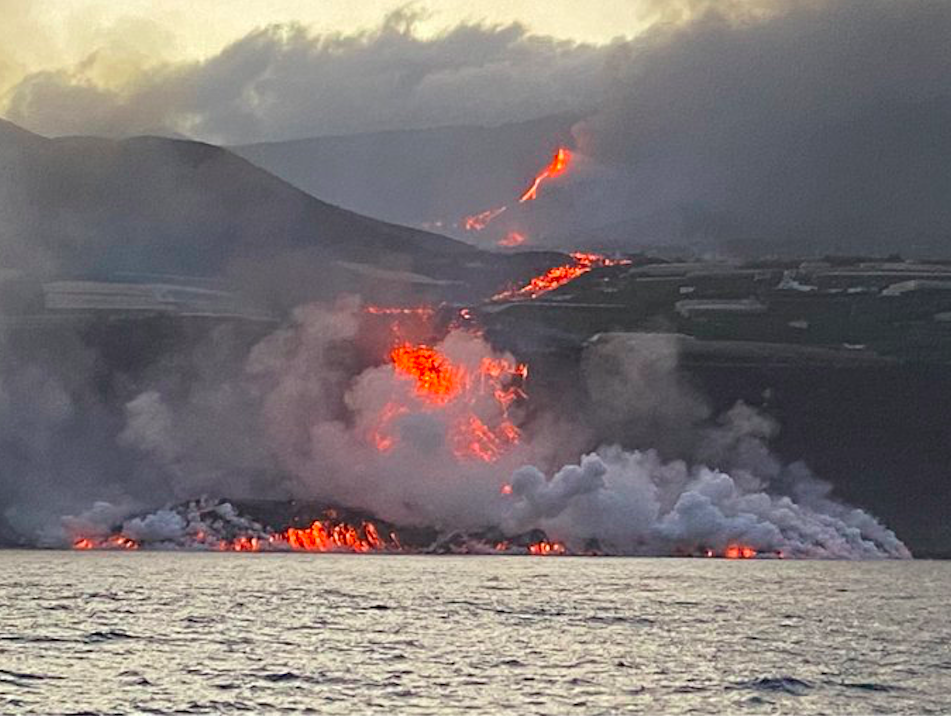 Lava from the volcano on La Palma in the Canary Islands reached the sea late on Tuesday night, with experts now warning of toxic gases after nine days of the lava destroying hundreds of homes, devastating crops and causing the evacuation of thousands of residents.

Huge clouds of white steam billowed up from the Playa Nueva area (also known as Los Guirres beach), as the bright red molten lava tumbled from 100 metre high cliffs into the Atlantic Ocean.

‘When the lava reaches the sea, the lockdown must be strictly observed,’ Miguel Angel Morcuende, head of the Canary Islands Volcanic Emergency Plan, said earlier on Tuesday.

The area had been evacuated for several days as authorities waited for the lava to reach the water. Its erratic flows and changes in the terrain, however, had slowed its progress.

Officials had said that the lava flowing into the sea could trigger explosions and clouds of toxic gases and the Canary Islands’ emergency service urged those outdoors to immediately find a safe place to shelter. No injuries have so far been reported.

The Spanish government classified the island of La Palma as a disaster zone on Tuesday, a move that will trigger emergency subsidies and other support measures.

The government announced a first package of 10.5 million euros, to include around 5 million euros to ‘co-finance the purchase of homes for the relocation of people who have lost their houses’. The rest will go towards acquiring furniture and essential household goods, government spokesperson Isabel Rodríguez told reporters on Tuesday.

It is now ten days since the volcano started to erupt in the Cumbre Vieja national park in the south of La Palma, with the authorities forced to evacuate more municipalities and cancel flights over the past weekend.

Lava flows have destroyed at least 589 buildings, mostly homes on the island’s southwestern side that were caught on a slope below the volcano. Thousands of people have been evacuated and three coastal villages were locked down on Monday in anticipation of the lava meeting the ocean.