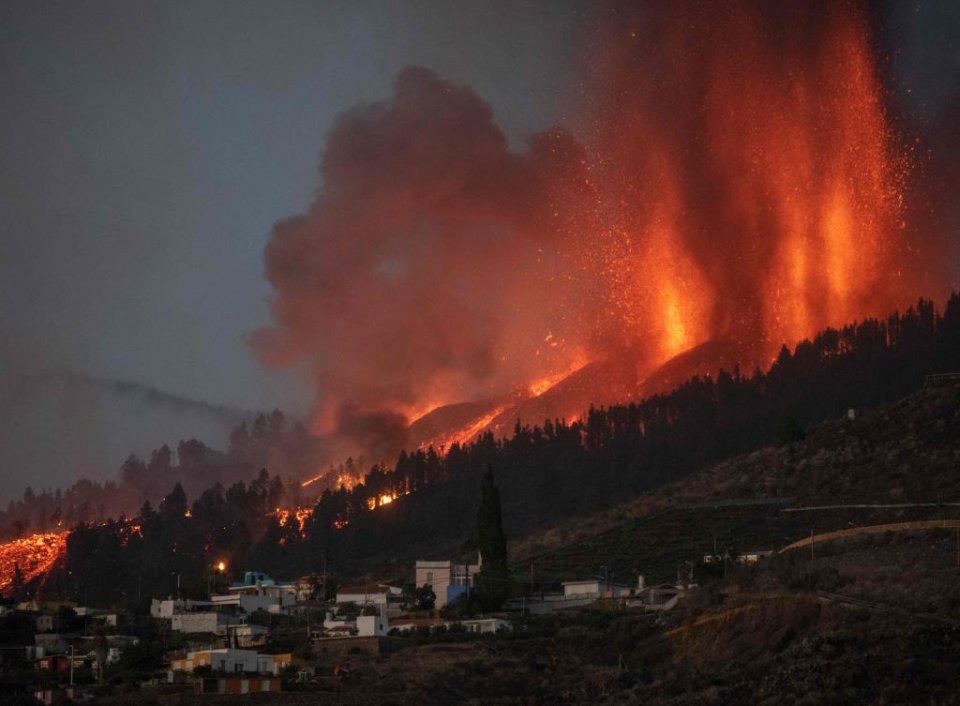 The volcano eruption that began on Sunday afternoon on the island of La Palma in the Canary Islands could last ‘several weeks or a few months’, according to the coordinator of Involcan, the Canaries Volcanological Institute.

Speaking on Monday morning on Cadena SER radio, Nemesio Pérez said that ‘lava should not cost lives, but it will destroy everything wherever it passes’. He said, ‘The volcano could be expelling lava for weeks or months.’

He explained that the duration of the volcano’s eruption would depend on how much sulfur dioxide it was emitting. ‘Yesterday [Sunday]’, he said, ‘there were between 6,000 and 9,000 tons of sulfur. Every day we will use these parameters. If it is descending, the eruption is decreasing, and when there is none, it will have ended.’ He added that ‘once 48 hours have passed with no emissions, we can conclude that it has ended.’

The volcano started to erupt on Sunday at around 3.15pm local time in the Cumbre Vieja national park in the south of the island of La Palma in the Canary Islands, following a week of increasing seismic activity. The volcano last erupted 50 years ago on the island that is home to around 80,000 people.

Prior to the eruption, the authorities had evacuated about 40 people with mobility problems, as well as farm animals from nearby villages close to the volcano.

The Guardia Civil have reportedly since evacuated around 5,000 people from their homes during Sunday night, with the emergency level raised to red at 5pm local time, affecting the municipalities of Tazacorte, El Paso, Fuencaliente, Mazo and Los Llanos de Aridane, home to a total of around 35,000 people.

There have been no reported victims or injuries so far, but on Monday morning the local authorities were estimating the lava had already razed about 100 homes in El Paso.

The authorities also estimate that 10,000 people might eventually need to be evacuated from their homes. They have also recommended that residents close all windows and outside doors, and turn off their supplies of water, gas and electricity before making their way to the established meeting points.

An exclusion zone of 2km has been established around the area in order to reduce the impact of airborne particles and gases. The eruption has created two fissures that are 200 metres apart, with lava flowing from eight different points of the volcano.

Ángel Víctor Torres, president of the Canary Islands, said that ‘the lava is moving toward the coast and the damage will be material’. He said that ‘everything points to there not being new eruption points’, although ‘there may be some other fissures but the safety of citizens is guaranteed’.

Spanish Prime Minister Pedro Sánchez arrived in the Canary Islands on Sunday evening, after cancelling a scheduled trip to New York to the UN General Assembly. On Monday he was due to visit one of the shelters in El Fuerte, organised by the Red Cross, for people who were evacuated from their homes due to the eruption. Sánchez said that the inhabitants of the affected areas would be safe, and stated that assistance would be given for those who have suffered material losses and damage.

The air navigation manager in Spain, Enaire, recommended that no flights land on La Palma island, but air traffic is not officially closed and airlines have the final say as to whether they fly there. Wind conditions were not forcing the closure of the airport on the island on Monday morning.

Experts had been keeping a close watch on the volcano after observing an upsurge in seismic activity and magma displacements. Before the eruption scientists had recorded a series of earthquakes reaching 3.8 magnitude in the national park, according to the Spanish National Geographical Institute (ING).

The earliest recorded volcanic eruption in La Palma took place in 1430, according to the ING. In the last eruption in 1971, one man was killed when he took photographs near the lava flows but no property was damaged.