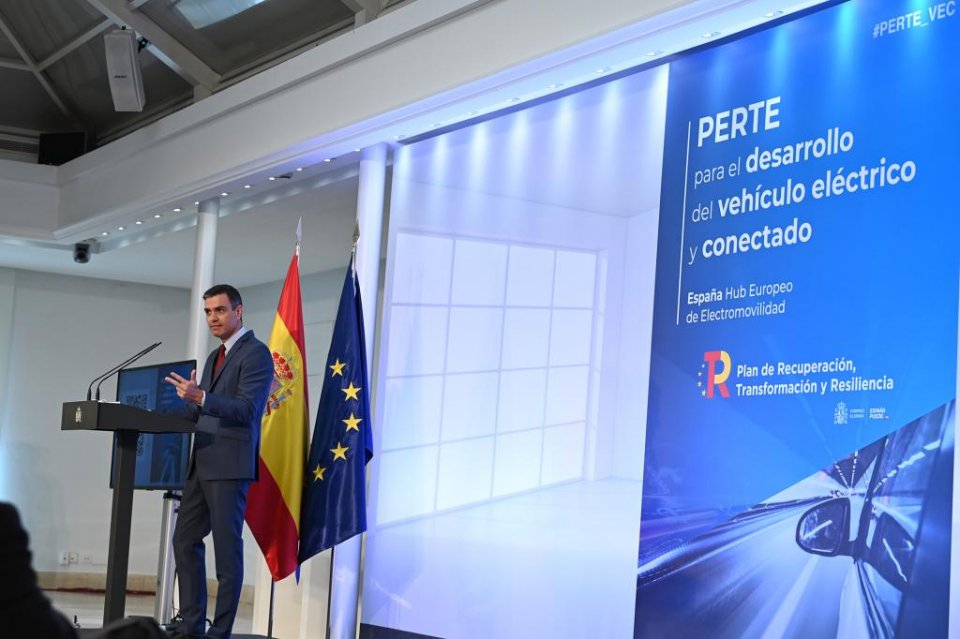 More of the government’s plans to boost the economy with the EU’s pandemic recovery funds have been confirmed this week by Prime Minister, Pedro Sánchez, as he unveiled more details about the injection of investment in the electric car industry.

In recent weeks, Sánchez has revealed plans to support this sector in its efforts to become world leaders in the electric car manufacturing industry and this week presented the ‘Strategic Project for the Recovery and Economic Transformation (PERTE)’ for Electric and Connected Vehicles.

Investment of 4.3 billion euros has been allocated to the sector, to incorporate all aspects of the supply and manufacturing chain, including production of battery cells.

Speaking at an event to introduce the first of seven plans to transform the country’s economic fortunes, using the 140 billion euros that Spain is expected to be allocated from the EU’s Next Generation funds, Sánchez explained that ‘our state needs to be an entrepreneurial state in a tight alliance with the main stakeholders’.

He will be appointing an industry leader to combine the joint efforts of the private and public sectors in the development of Spain’s electric car industry.

The government is aiming for Spain to become the ‘European hub for electromobility’. Currently, the country is the second largest vehicle manufacturer in Europe and the ninth largest in the world.

The sector is also the fourth largest export sector in Spain and represents 15% of total exports.

The plans intend to increase the industry’s share of Spain’s Gross Domestic Product from the current 10% to 15% by 2030.

Job creation is also a major aspect of the plan, with 140,000 jobs expected to be created, including training young people through the new professional training programmes aimed at the electric car sector.

Sánchez highlighted the importance of this, saying, ‘I would like to point out that Spain is the first country in which an Academy for Batteries is to be set up. This initiative will enable the training of some 150,000 people in the coming years in the different areas related to the development and manufacture of batteries for electric cars’.

As part of the plans, the government will also be investing one billion euros in stimulating sales of electric vehicles, with a further billion allocated to installing more public electric plug-in points.

Currently, there are just 11,500 points in the national network, with the investment aiming to increase this to 100,000 in three years.

As part of the plans to promote this aspect of the PERTE, Sánchez has also announced the creation of an ‘Alliance for Electric and Connected Vehicles’, to bring together representatives from associations of the automotive sector, trade unions and regional governments.

Collaboration is seen as key to successfully implementing the plans, combining all aspects of the supply and manufacturing chain within the sector.

It is hoped that the support package announced this week will allow the funds to be invested as soon as possible, and help establish Spain as global leaders in the eclectic car industry.