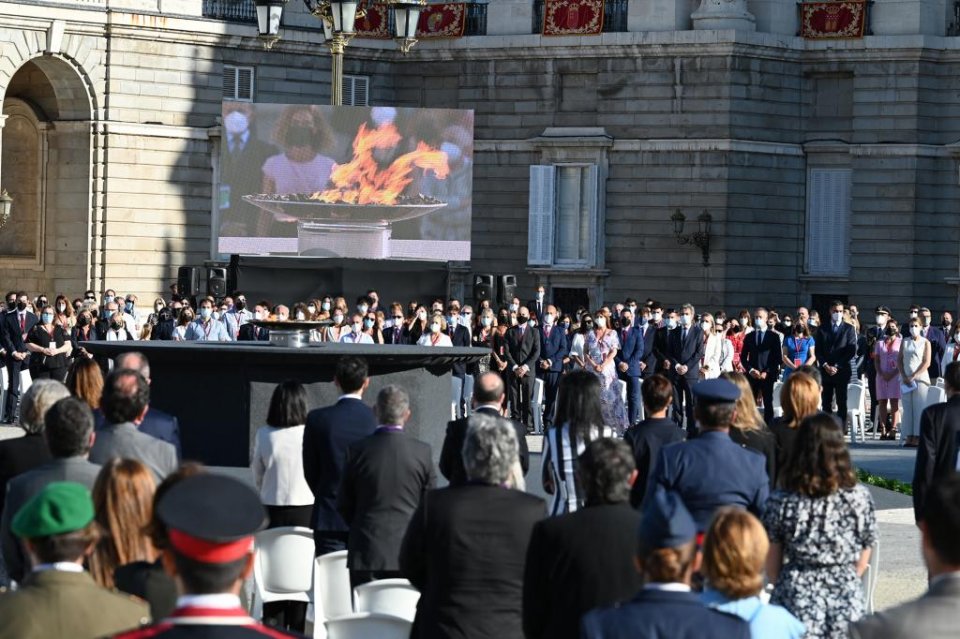 The Plaza de la Almería of the Royal Palace in Madrid was the perfect setting on Friday for a state tribute in memory of the victims of Covid-19, and also in recognition of Spain’s health workers, particularly those who have been working on the front line. More than 100 health professionals have died since the start of the pandemic and almost 130,000 have been infected.

The occasion came exactly a year after the first state tribute, and the ceremony was again presided over by king Felipe VI. Prime Minister Pedro Sánchez, all members of the government and most presidents of Spain’s regions and autonomous cities also attended.

‘A year ago we gathered in this same place to honour the victims of Coronavirus. I said that it would be a day that would leave a mark on us. Today we return to remember those who have not been with us since then and show our deep respect to the health personnel who, at the beginning of the crisis, tried to control a virus for which there was no known remedy and there was no vaccine,’ said the king.

Relatives of the 102 health workers who have died since the beginning of the pandemic attended the event, making their way to Madrid from all parts of the country. Surgeon María Díaz Diñeiro, daughter of Joaquín Díaz Domínguez, head of the Surgery Department at La Paz Hospital (Madrid), spoke on her father’s behalf.

Also present at the tribute were the first vaccinated people from various regions in Spain, serving as a symbol of hope offered by science and vaccination, as well as the courage of the group most affected by death during the pandemic. The first person to be vaccinated in Spain, 97-year-old Araceli Hidalgo, was present and part of the tribute as well.

During the ceremony, Felipe VI presented the Grand Cross of the Order of Civil Merit posthumously to four health workers, on behalf of all of their colleagues. In addition to Dr Joaquín Díaz Domínguez, honours were also bestowed upon Dr Jesús Algaba, the oldest deceased health professional; nursing assistant Pablo Riesgo, the youngest of the recipients, who died at the age of 26; and Dr Nedialka Veleva, who was born in Bulgaria but worked in Spain for most of her professional career.

The remaining Grand Crosses of Civil Merit awarded posthumously were presented to the families by the king in a private ceremony at the Royal Palace.

In his speech, Felipe VI expressed the recognition and ‘infinite gratitude’ of Spanish society towards the health professionals who lost their lives in order ‘to save many others’.

Did the Vox party send a representative this year? They failed to do so last year treating the event with utter contempt.