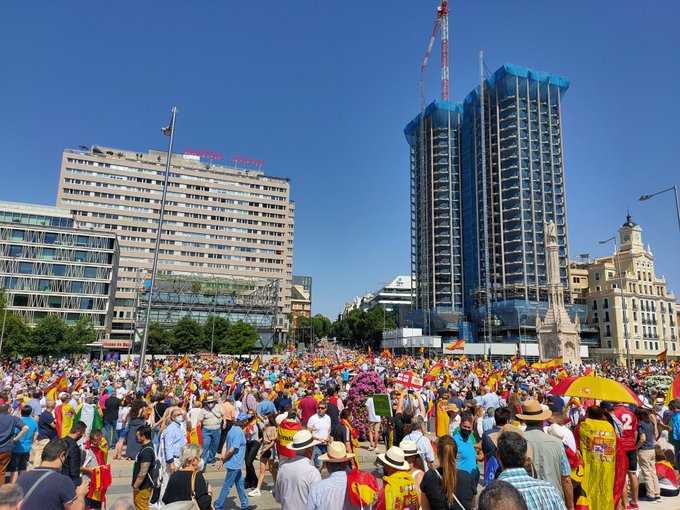 Protestors and politicians gathered in the Plaza de Colón in Madrid on Sunday to rally against the proposed pardons for the jailed Catalan pro-independence leaders.

The leaders of the right-wing People’s Party (PP), Ciudadanos (Cs) and far-right Vox all attended the rally, but unlike a previous demonstration in the same square in February 2019, they avoided being photographed together.

With the Spanish coalition government (PSOE–Podemos) led by socialist Pedro Sánchez currently considering granting pardons to the nine leaders, Spain’s right-wing and far-right opposition parties have been preparing a legal and political battle in order to try and prevent it from happening – with Sunday’s rally organised by a civic group, ‘Union 78’, also forming part of the opposition strategy. Further rallies have also been promised. The granting of pardons has become a contentious and politically-charged issue that could come to define Sánchez’s time as prime minister.

Former Catalan vice president, Oriol Junqueras, who has been in jail for almost four years for his role in the 2017 independence referendum, suggested in a newspaper article last Monday that he would support the granting of a pardon for him and the other eight politicians and activists behind bars.

Around 25,000 people attended the rally on Sunday, according to Spain’s National Police – half the amount that attended the February 2019 rally – although Madrid’s local police put the figure at 126,000, to include those who were congregating on the city’s major avenues converging on the Plaza de Colón. The organisers of the rally closed off access to the square at 11.30am, half an hour before the event was due to start, saying that capacity had been reached. Those attending were asked to respect safety distances and wear face masks at all time.

Union 78 said the protest was called because they ‘do not intend to passively tolerate the conversion of blackmail into a normal political procedure, as would happen with the granting of pardons to convicted coup plotters’. They claim the pardons serve no purpose other than keeping Sánchez in power ‘at any price’.

Spain’s minority governing coalition has to rely on the votes or abstention of other parties, including the pro-independence Esquerra Republicana (ERC) party, in order to pass legislation in Congress.

Pardons for the jailed pro-independence leaders are ‘close’ to being granted, according to Spain’s deputy prime minister Carmen Calvo.

In an interview published by La Vanguardia on Sunday, Calvo called on the PP not to confront ‘all of Catalonia’, and said the pardons were ‘not a matter of small political calculation, but of big vision’.

Prime Minister Sánchez coincided with the newly-elected Catalan President, Pere Aragonès, at a business forum in Barcelona last Monday, ahead of ‘dialogue’ talks scheduled to be held later in June again to try and resolve the Catalan political conflict. Sánchez took the opportunity in Barcelona to call for ‘harmony and reunion as weapons of progress’.

Aragonès called for ‘a new era of dialogue and negotiation to reach agreements and listen to all proposals’. He added: ‘I want to acknowledge that we’ve taken steps forward and this is important.’

And not one member of the public gratuitously beaten or had fingers broken by the Guardia Civil?