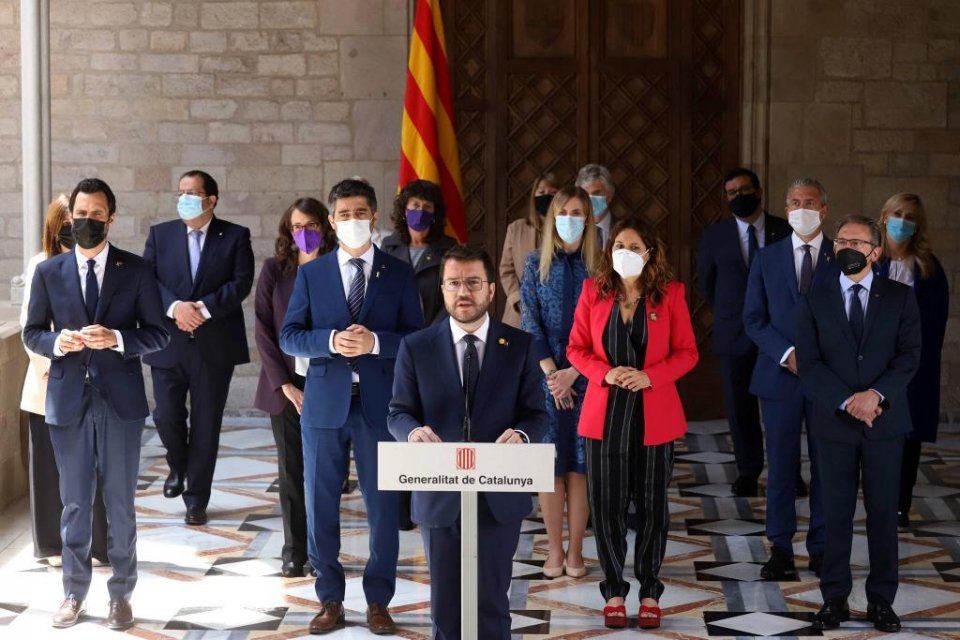 Pere Aragonès of the Esquerra Republicana (ERC) party has promised a ‘new era’ for Catalonia, after officially taking office as president on Wednesday to lead a coalition government with the Junts per Catalunya (JxCat) group – over three months since the 14 February elections. It follows the recent vote of 74 Catalan MPs in favour of his presidency, with 61 votes against.

‘Today we begin a new era,’ said Aragonès. ‘A new Catalan government begins to walk, the one of this legislature, which must be nonconformist, innovative, transformative, imaginative, creative, republican.’

Aragonès was accompanied by the 14 ministers he has chosen for his cabinet, following a ceremony held at the government headquarters in central Barcelona. The new heads of departments are split evenly in the coalition, with seven from the ERC and seven from JxCat (see below).

The new Catalan cabinet begins work in the middle of various crises, including the health emergency posed by Covid-19, the ensuing economic crisis, as well as huge questions standing over issues such as housing.

‘There is a political conflict that needs to be resolved,’ Aragonès also said, referring to the situation of the nine Catalan independence leaders in prison. They were jailed for between 9-13 years by Spain’s Supreme Court on 14 October 2019, convicted for crimes of sedition and misuse of funds for their roles in the 1 October 2017 independence referendum.

On Wednesday morning, the Spanish Supreme Court also published a report opposing granting them a pardon, a decision which will ultimately be in the hands of the Spanish government [please note – we are currently preparing a separate report on this]. ‘The solution that raises the most consensus is amnesty and self-determination,’ Aragonès said on Wednesday, during his investiture.

Aragonès described his 14 ministers as the ‘best team’ to address the challenges facing Catalonia, and praised the ‘good working environment and complicity’.

He said it was time to ‘roll up our sleeves without fear of scratches’ and ‘to move towards the prosperous, fair, green, feminist and fully free Catalonia that we want to be’.

The new Catalan president said that the priority of the new executive is ‘the reconstruction of the lives of all Catalan citizens’, and he promised an ‘urgent response with no unjustified delays’.

The ceremony was held in the ‘Patio of the Orange Trees’ of the Palau de la Generalitat, in front of about 40 attendees, including the president of the Catalan Parliament, Laura Borràs, former president Quim Torra, the mayor of Barcelona, Ada Colau – as well as three of the nine jailed politicians and activists: the president of ERC, Oriol Junqueras, secretary general of JxCat, Jordi Sánchez, and the president of Òmnium civic organisation, Jordi Cuixart.

The 14 heads of department of the Catalan government: