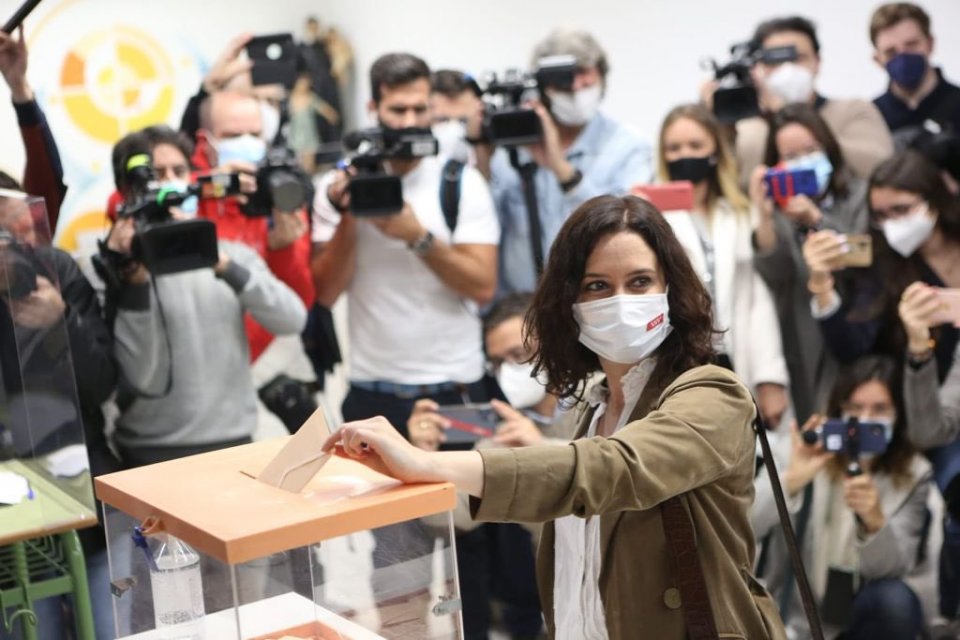 Isabel Díaz Ayuso of the right-wing People’s Party (PP) has swept to victory in the Madrid elections held on Tuesday.

Voters in Spain’s wealthiest region of Madrid are going to the polls today (Tuesday) to elect the new government in the 136-seat regional assembly, in an election that could also reshape the nation’s political landscape – partly due to Madrid’s conflictive stance towards the central government’s Covid-19 restrictions.

Isabel Díaz Ayuso, from the right-wing People’s Party (PP), is the current president of Madrid’s regional government, and is the frontrunner to be returned again as leader, according to all opinion polls.

Ayuso, 42, has won the support of many Madrid residents by defying Spain’s coalition government formed of the socialist PSOE party and left-wing Podemos group, and which put pressure on her to close down bars and restaurants to curb the Covid-19 pandemic. Various legal actions were threatened during the previous and on-going State of Alarm across Spain, which finally ends on 9 May.

Ayuso prioritised the region’s economy and social life, to the delight of many bar and restaurant owners – as well as most Madrileños, who are famous for enjoying their nightlife. She kept bars and shops open to support Madrid’s economy, while other regions had all shut non-essential activities. Madrid became the only major European capital to keep hospitality, shops and theatres open with few restrictions.

Critics, however, accuse Ayuso of having neglected the health services. Latest figures from Spain’s health ministry published on Monday show that the Madrid region, which is home to some seven million people, recorded 369 Covid-19 cases per 100,000 in the last 14 days against a national average of 223. Occupancy of intensive care units is also the highest in Spain, at about 44.7%. To date there have been 685,903 cases of Covid-19 in Madrid since the start of the pandemic, and 15,015 deaths.

The PP has controlled the region for the past 26 years and a convincing win on Tuesday would likely give impetus to the party at a national level again. Polls have projected the PP to win over 40% of the vote, potentially doubling its seats in the assembly from 2019’s election, but Ayuso might need the help of the far-right Vox party to govern.

The polls have suggested that Prime Minister Pedro Sánchez’s PSOE socialist party could lose half of its seats, and together with the two left-wing parties, Mas Madrid and Podemos, would be unlikely to form an absolute majority.

Meanwhile polls also suggest that the centre-right Ciudadanos (Cs) party, which has previously teamed up with the PP to form regional governments, faces the prospect of winning no seats and disappearing from the political landscape.

The election campaign has been bitter – overshadowed also by seven incidents of death threat letters that have been sent in the past two weeks to politicians, as well as to the head of the Guardia Civil.

One of the first death threat letters was sent to Pablo Iglesias, leader of Podemos, who quit his role as the second deputy prime minister of Spain in March in order to specifically run in the Madrid elections against the right-wing and far-right groups. The letter to the Podemos leader provoked a bitter confrontation between Iglesias and Rocío Monasterio, the far-right Vox party candidate in the Madrid election, who cast doubts about the death threats during a radio debate.

Ayuso later also received a similar letter. She then played down the threat, saying, ‘These things must be faced with the importance they have: none. Those who commit these acts are seeking their five minutes of fame. To those who use terror to try to be in the spotlight, [I respond with] serenity and contempt.’ Her reaction was compared to that of her rival Iglesias.

Polling stations opened at 9am on Tuesday morning and will close at 8pm. Madrid has recommended voters to go to the polls at different times, depending on age and health issues. Those aged over 65 have been recommended to vote between 10am and 12 noon. Those with Covid-19 or displaying symptoms of it, have been advised to vote from 7pm to 8pm – and all other citizens between 12 noon and 7pm.