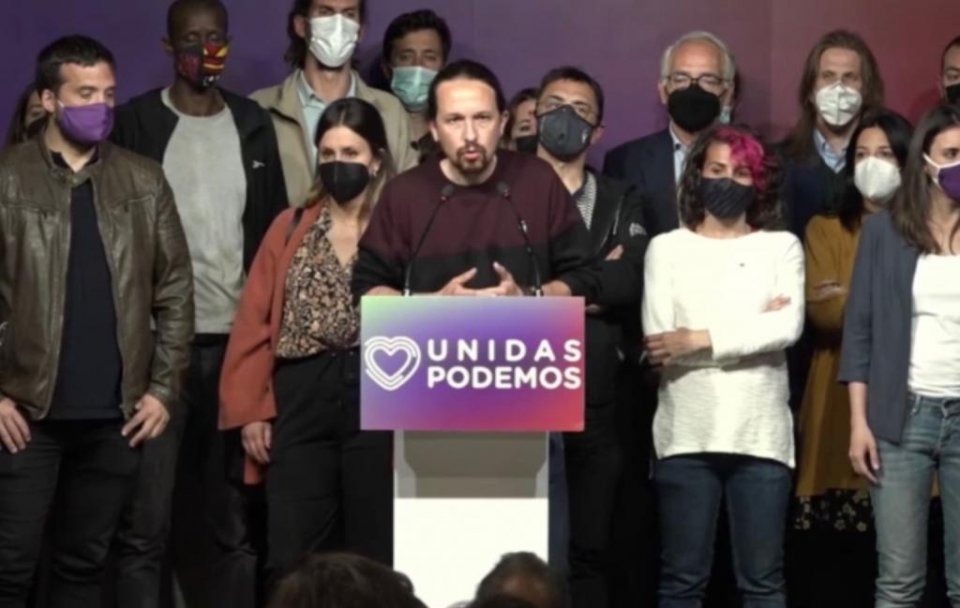 Pablo Iglesias, the founder of Spain’s left-wing Podemos group, announced that he was leaving politics on Tuesday night, shortly after the votes had been counted in the Madrid election, in which Isabel Díaz Ayuso of the right-wing People’s Party (PP) swept to victory to continue as president of Madrid’s regional assembly.

Just over a month ago, Iglesias quit his role as the second deputy prime minister of Spain in the PSOE–Podemos coalition central government, in order to run in the Madrid elections against the right-wing and far-right groups.

At the time, he’d said, ‘I’ll put all my energy into building a strong and broad left-wing candidacy to prevent the far-right from taking control of our institutions’, proclaiming that ‘a militant must be wherever he’s most useful.’

Pony-tailed Iglesias, 42, said to reporters on Tuesday night: ‘I’m leaving all party politics … I won’t be an obstacle for the renewal of leadership our political force needs.’

‘We have failed, we have been far from putting together a sufficient majority,’ said Iglesias. ‘When you are no longer useful, you need to know when to withdraw,’ he added.

Although Iglesias had already announced that he would not run as head of his party for prime minister in the next national elections, due in 2023, Tuesday night’s announcement precipitates his departure from Spanish politics, which he helped transform in the last decade.

He founded Podemos in January 2014 to rally the vote of Spaniards outraged by austerity measures imposed following the 2008 financial crisis. In May 2014 he won a seat as a member of the European Parliament, and then his political rise was meteoric.

The emergence of Podemos broke the two-party dynamic in Spain – where the Socialists (PSOE) and the right-wing PP had alternated power since the 1980s – paving the way for other minority parties to gain footholds in the Spanish Congress.

In 2016, Iglesias achieved his best result after creating an alliance of left-wing parties called Unidas Podemos, which won a share of votes that brought them even closer to that of the PSOE.

But Iglesias’ radical vision of a progressive overtaking of the mainstream left-wing never fully materialised, and in 2019 his failure to reach an agreement with Spanish Prime Minister Pedro Sánchez forced a repeat election. Eventually, Podemos and the PSOE formed Spain’s first coalition government – but a year and a half on, having announced his retirement, Iglesias has tapped Labour minister, Yolanda Díaz, as his successor.

The campaigning for the Madrid elections on Tuesday had been bitter – overshadowed also by seven incidents of death threat letters sent in the past two weeks to politicians, as well as to the head of the Guardia Civil.

One of the first death threat letters was sent to Iglesias, provoking a bitter confrontation between him and Rocío Monasterio, the far-right Vox party candidate in the Madrid election, who cast doubts about the death threats during a radio debate.

Ayuso later also received a similar letter. She then played down the threat, saying, ‘These things must be faced with the importance they have: none. Those who commit these acts are seeking their five minutes of fame. To those who use terror to try to be in the spotlight, [I respond with] serenity and contempt.’ Her reaction was compared to that of her rival Iglesias.

Isabel Díaz Ayuso sweeps to victory in the Madrid election

10% of Sitges citizens are now fully vaccinated against Covid-19