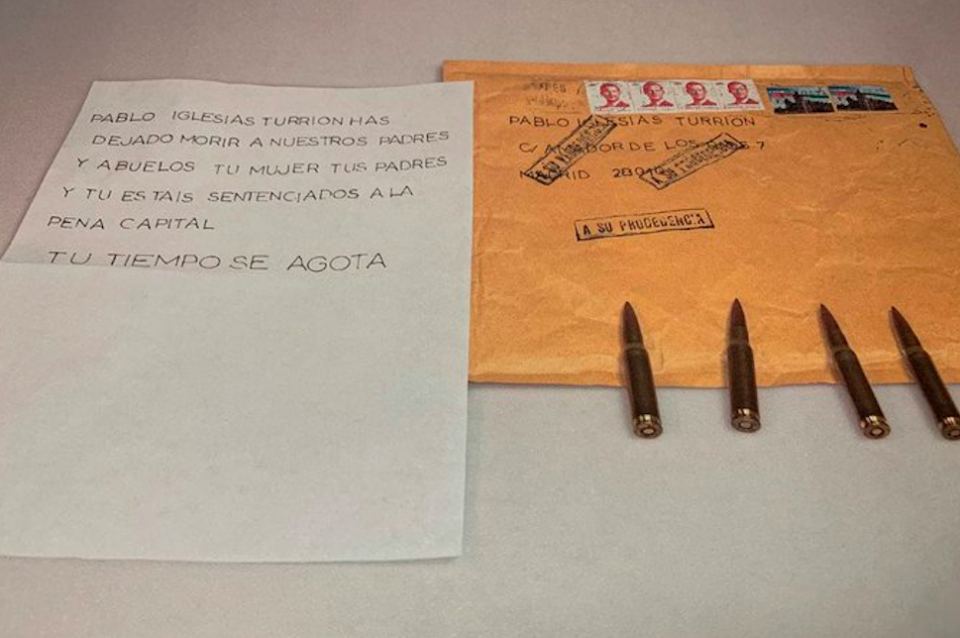 Iglesias posted a picture of the letter and envelope he had received, together with the four bullets, on Twitter on Friday. The letter had been addressed to him at the Interior Ministry’s headquarters in Madrid.

‘You have let our parents and grandparents die,’ the anonymous letter said. ‘Your wife, your parents and you are sentenced to capital punishment. Your time is running out.’

Iglesias said that the interior ministry had told him it considered the threats serious and that the police were investigating. ‘I hope some arrests will happen,’ he told the state broadcaster TVE.

According to Iglesias, Interior Minister Grande-Marlaska and his appointee, Guardia Civil Director General María Gámez, received similar letters. Grandes-Marlaska has not yet made any official comment. However, the Europa Press news agency has reported that the letter received by the interior minister stated: ‘You have 10 days to step down. The time to laugh at us has ended. National Police. Civil Guard.’ The minister oversees both police bodies in Spain.

Most political parties in Spain put aside their differences on Friday to condemn the death threat letters. However, the issue has since provoked a bitter confrontation between Iglesias and Rocío Monasterio, the far-right Vox party candidate in an upcoming regional election in Madrid, who cast doubts about the death threats during a radio debate (see clip below). Iglesias quit his role as the second deputy prime minister of Spain in March in order to specifically run in the Madrid elections against the right-wing and far-right groups, scheduled to take place on 4 May.

On Friday morning the Vox party’s Madrid leader, Monasterio, said she was against ‘all kinds of violence’, but then refused during the pre-election debate on Cadena SER radio to retract earlier remarks she’d made that questioned her opponent’s account of the letters received.

As a result, Iglesias and two other left-wing candidates, refused to continue speaking with the far-right politician, and the debate ended abruptly.

Iglesias has been a key figure in Spain ever since bursting onto the political scene in a 2014 European election as Podemos’ candidate. The party presented themselves as the political heirs of the anti-austerity protests that swept Spain in the wake of the financial crisis.

Iglesias left the role in March this year, however, in order to run in the 4 May regional election in Madrid. ‘I’ll put all my energy into building a strong and broad left-wing candidacy to prevent the far-right from taking control of our institutions,’ he said at the time, proclaiming that ‘a militant must be wherever he’s most useful’.

The current president of the capital’s regional government, Isabel Díaz Ayuso of the right-wing People’s Party (PP), looks set to win the 4 May election, according to the latest polls. But her ability to form a government is likely to hinge on opening the door to a Madrid coalition with the far-right Vox.

You can see the moment that Pablo Iglesias leaves the radio debate in this clip via @ElHuffPost on Twitter:

It is extremely difficult to believe that such dangerous packages were able to get through the very stringent controls long put in place by the Post Office to eliminate/stop prevent such packages being sent. What next? undetected hand grenades? blood spattered knives? A cynic would point out that we are in an election campaign here in Madrid.