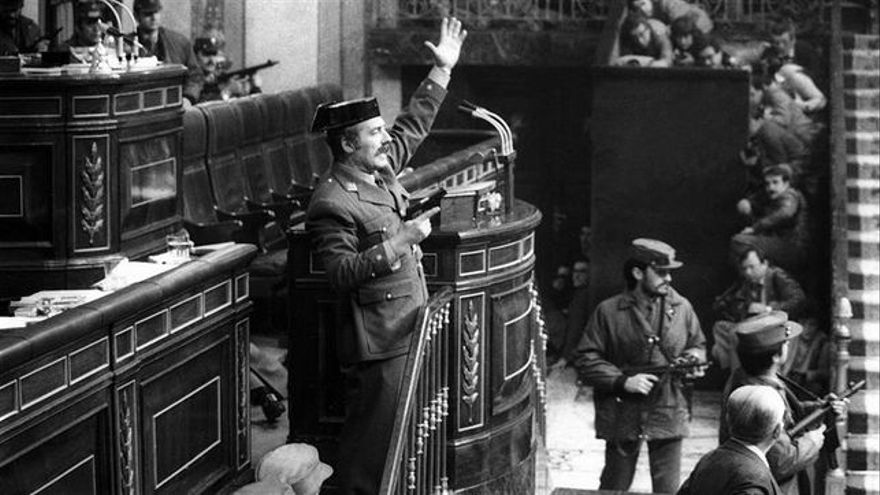 Spain marked 40 years since a failed military coup on Tuesday, but without the presence of former king Juan Carlos I, whose intervention back in 1981 has been credited by historians for helping stop the crisis, and for continuing to steer the nation to a democracy following the death of dictator Franco.

The now disgraced former monarch left for the United Arab Emirates in August 2020, following scandals and allegations of financial impropriety.

In his place, his son and current King Felipe VI, Spanish MPs and others are marked the occasion of 40 years since a paramilitary coup attempt of 1981 failed to derail the country’s transition to democracy.

In the afternoon of 23 February 1981, a group of some 200-armed Guardia Civil officers, led by Lieutenant Colonel Antonio Tejero, stormed the Spanish Congress in Madrid. Tejero took the chamber’s podium, firing a series of warning shots. The civil guards – who were still loyal to the former dictator Franco’s regime – held the entire lower house of parliament at gunpoint. The MPs, who were preparing to vote in a new government, were held hostage for the next 18 hours.

In reaction to the event, king Juan Carlos I, who had been appointed by Franco and was leading the country since the dictator’s death in 1975, addressed the nation. Dressed in uniform as commander-in-chief, the king rebuked the attempted coup, declaring his support for the new democratic government and constitution, and calling on the armed forces to follow suit.

Without the support of Juan Carlos and the majority of the Spanish armed forces, Tejero and his rebel allies surrendered by noon the following day, releasing the hostage MPs.

To mark the anniversary of the attack on Spain’s democratic system king Felipe VI, in the absence of his father, delivered a speech from the same chamber where shots had been fired four decades ago.

‘That night I was also a witness, although still a child, of that historic event and I learned the immense and incalculable value of freedom for the Spanish people,’ he said. He added that, ‘Forty years ago, today, Spain experienced an extraordinarily serious attack on its democratic system’.

Hailing the former monarch’s intervention, Felipe VI made his first public reference to his father since his move to Abu Dhabi last year: ‘King Juan Carlos I shouldered his responsibility and commitment to the constitution … (and) his firmness and authority were decisive for the defence and triumph of democracy.’

Public opinion of the former king and his acclaimed triumph for democracy in 1981, as well as the concept of Spanish democracy have been subject to scrutiny of late.

Juan Carlos abdicated in 2014 and retired from public life in 2019 amidst scandals and huge decline in popularity. His move to Abu Dhabi last year followed revelations of numerous financial misconducts, which have led to investigations being opened in Switzerland.

The king’s actions and ongoing investigations have further anchored the argument of those in Spain who want the monarchy abolished.

The definition of democracy has been a recent source of political debate, with government coalition party Podemos, saying Spain lacked ‘democratic normality’ because of its jailing of Catalan independence leaders over a failed 2017 independence bid.

On Tuesday, a group of seven pro-independence and nationalist parties from Catalonia, Galicia and the Basque Country, all boycotted the official commemoration of the attempted coup.

In a manifesto, they demanded a break from what they referred to as the political generation that arose after Franco, stating that ‘real democratisation will only be possible by breaking with this legacy’.

The document continued by adding, ‘as long as the state upholds the same political, legal and monarchical structures that existed 40 years ago, as long as it doesn’t recognise the right to self-determination and has political prisoners, people in exile and repression, there will be no democratic normality, nor can the state be considered a full democracy’.

‘These days, we see in the streets the social discontent, protest and weariness with these democratic shortcomings,’ it said referring to a wave of street protests after a rapper Pablo Hasél was recently jailed for controversial tweets. ‘Real democratisation will only be possible by breaking with this legacy.’