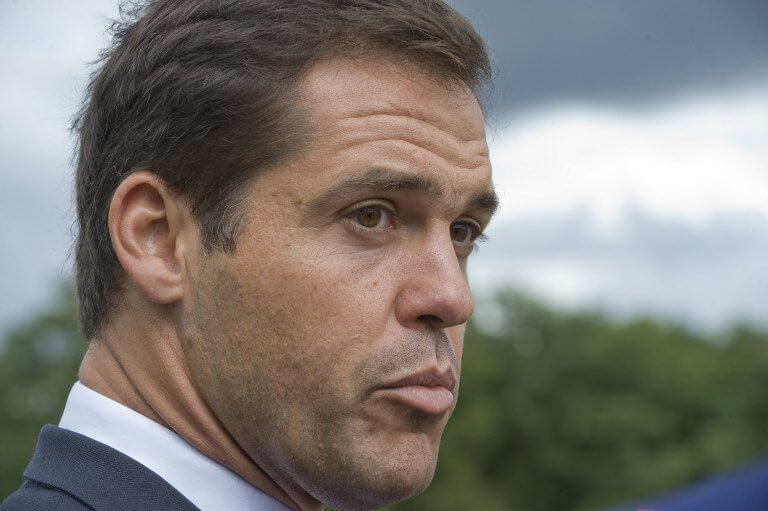 Luis Alfonso de Borbon, the great-grandson of Franco, is leading opposition to Spain’s bid to remove the dictator’s remains from an opulent mausoleum where they have lain for more than four decades, calling it an attack on over half the country.

[LATEST UPDATE: Franco’s remains to be exhumed on Thursday 24 October]

The heirs of Franco, who ruled with an iron first from 1939 until his death in 1975, have long been regular grist for the gossip mill, with their divorces, marriages and parties featuring prominently in Spain’s glossy magazines.

But ever since Prime Minister Pedro Sánchez announced in June plans to rebury Franco in a more discreet place, Luis Alfonso de Borbon has emerged as the family’s most outspoken defender of his great-grandfather’s legacy.

The 44-year-old banker, a pretender to the defunct French throne, took part in a July demonstration against the exhumation at Franco’s crucifix-topped resting place in the Valley of the Fallen, a vast monument the dictator built with forced labour.

Several bystanders gave him a fascist salute or shouted, ‘You are our king!’ as he passed by with his wife, Venezuelan heiress Margarita Vargas.

‘History will condemn those who profane this grandiose temple,’ he later wrote on Instagram.

He also recently headed up a media campaign called ‘Don’t Touch the Valley’ which opposes the exhumation.

Sánchez’s Socialist government has made moving Franco’s remains to a more discreet place one of its priorities.

While the government on Friday called an early general election on 28 April, it has also given Franco’s family two weeks to decide on a place to rebury him when the remains are exhumed.

The National Francisco Franco Foundation, which aims to keep memory of the dictator alive, said it would appeal the move, taking the matter to the Supreme Court.

‘When you attack Franco, you attack my family, over half of Spain, the monarchy and the Church which protected him,’ Luis Alfonso de Borbon said in an interview published in conservative daily newspaper La Razon in October.

He frequently re-tweets messages from the leader of newly-emerged far-right party Vox, Santiago Abascal, who is opposed to the exhumation.

The aristocrat – who is also known by the French spelling of his name, Louis Alphonse de Bourbon – recently joined Abascal at a sports competition organised by the Spanish Foreign Legion.

Born in Madrid, he is Franco’s great-grandson through his mother, Maria del Carmen Martinez-Bordiu.

After his father died while skiing in the United States, the teenager was taken in by his grandmother Carmen Franco, Franco’s only child.

When Carmen Franco died in December 2017 aged 91, Luis Alfonso de Borbon replaced her as honorary president of the Francisco Franco Foundation, which defends the late dictator’s memory and policies.

His high-profile defence of Franco goes against the advice his monarchist friend, French television host Thierry Ardisson, gave him during a 2017 interview with French Catholic television channel KTO.

‘Show yourself as much as possible, remind people that a king is possible, but remain above the fray,’ Ardisson said at the time.

Luis Alfonso de Borbon, who has both Spanish and French citizenship, is the most senior living male descendant of France’s House of Bourbon, through his father’s side.

‘I have always said that I am at the disposal of the French people and of France,’ he said during a 2017 television interview.

Alfonso de Borbon has made the cover of magazines such as Vanity Fair and Hola!.

He has four children with Vargas, who he married in 2004.

LATEST UPDATE: Franco’s remains to be exhumed on Thursday 24 October

Concerts coming up in Madrid and Barcelona